OnePlus Nord Confirmed to Have a 4,115 mAh Battery

OnePlus Nord is getting closer and closer to its official launch on 21st January and we are hearing more and more about what the device is going to be. Recently, we confirmed that it will be the first OnePlus device to not only feature a dual front-camera system but also the first device from OnePlus to have an ultra-wide front camera, and now, we have finally got our confirmation regarding the battery capacity of the device.

OnePlus Nord Battery Size Revealed in a Rather Interesting Way

Now OnePlus didn't officially reveal the size of the battery. But if you remember, a few days ago, we showed off the official cases that the OnePlus Nord will have, and one of those cases happened to be a teardown case from none other than Zack from JerryRigEverything.

M2 Mac mini Performs Nearly Twice As Fast As A $6,000 Mac Pro In Single-Core Tests, And Costs Less Than One-Tenth Of The Price

Zack went ahead and teased the case again on his Instagram, but this time, the battery capacity on the case was pretty evidently revealed. 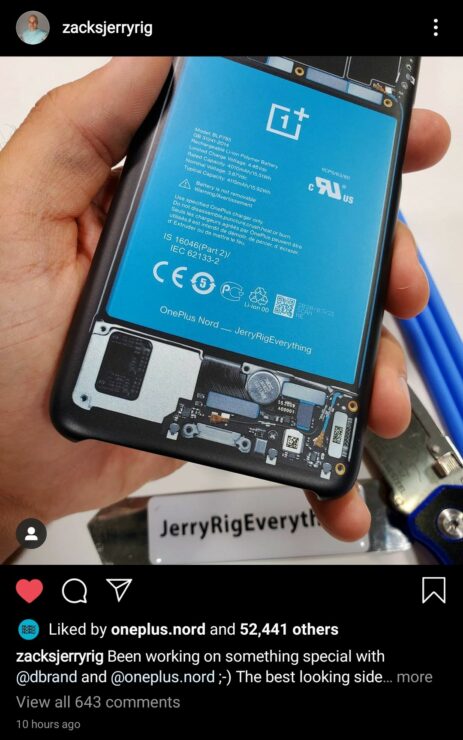 Now you should know that this is not an official reveal by any means, but judging by how these cases are pretty spot on as far as the representation is concerned, it is safe to say that the OnePlus Nord will, in fact, have a 4,115 mAh battery. Which is pretty good for a device with budget specs.

Now as far as the specs are concerned, the OnePlus Nord is stated to come with a Snapdragon 765G, a 4,115 mAh battery, a 48-megapixel primary camera, and a 32+8-megapixel front camera system. The device will, of course, be running OxygenOS based on Android 10 and is set to release on 21st July, later this month. This will also be the first phone to be revealed through an augmented reality event.

We will keep you posted as more information keeps rolling our way. Till then, stay tuned.