Despite the smartphone’s shortcomings concerning some features, OnePlus 2 was able to replicate the same amount of success as its predecessor. Its popularity can be backed up by the fact that over 3 million people has signed up to purchase one, which is phenomenal considering that the device was officially announced during the month of July. Previously, we had reported that the device was able to accumulate one million orders through the invite system, but in no time has that figure reached 3 million. 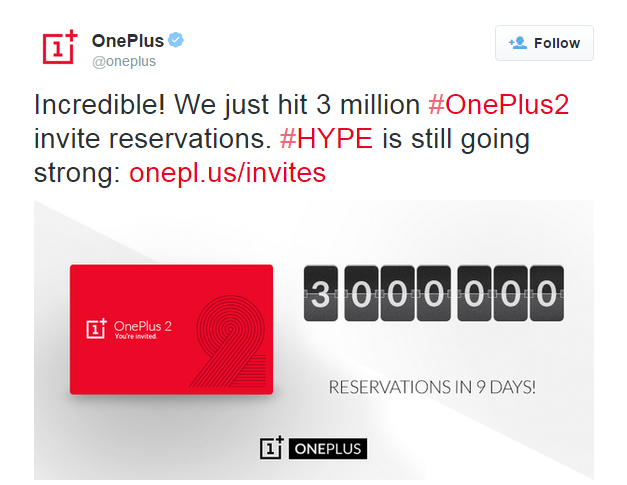 OnePlus 2 Popular Because Of Its Extremely Competitive Price Tag, As Well As Sporting Very Impressive Hardware

According to Carl Pei, who is the co-founder of the rising smartphone startup company OnePlus, his twitter account has an image that states that OnePlus 2 has already accumulated 3 million orders through the invite system. Earlier, OnePlus was hoping to reach the 5 million order count by the time 2015 came to a close, but looking at the rate at which people are signing up to grab a piece of the ‘Nexus Killer’ successor, it might not take long for the company to reach its goal.

As for the hardware specifications, OnePlus 2 sports V2.1 of Snapdragon 810, along with 4 GB of LPDDR4 RAM and 64 GB of internal storage. Keep in mind that the aforementioned hardware specs belong to the highest performing model and retails for $389 in the U.S. As for the 3 GB RAM model, the device carries the same chipset, but has been assimilated with just 16 GB of on-board storage.

The more disappointing aspects of the handset include not supporting Qualcomm’s Quick Charge 2.0 feature (despite the fact that OnePlus 2 can charge completely in three hours), not being incorporated with an NFC chip, and last but certainly not least, not providing support for a MicroSD card slot. While these features are necessary to be present in a high-end handset; that is not stopping millions of consumers from signing up for one.