Yesterday, NVIDIA announced their latest Virtual Desktop Infrastructure (VDI), the Grid 2.0, which will be powering gaming and professional 3D workloads through cloud computing. The Grid which houses NVIDIA based GPUs for virtualization was launched back at CES 2013 and based on the Kepler generation of GPUs. NVIDIA has now featured their latest Maxwell GPU architecture on the Grid 2.0 powered platform to deliver double the user density and performance than Grid 1.0. 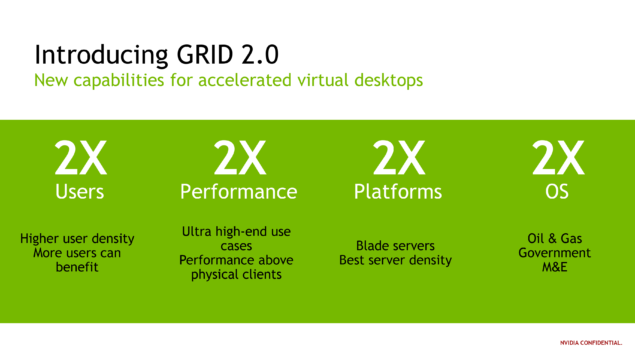 While Grid 2.0 is the main announcement by NVIDIA at the VMworld conference that is hosted by VMware, they also announce two new graphics cards powering their Grid 2.0 platform. These include the new Maxwell based Tesla M60 and Tesla M6. Replacing the NVIDIA Grid K2 is the Tesla M60, both cards are based on dual core designs. The former offers two Kepler GK104 cores with 1536 CUDA cores each while the latter offers two Maxwell GM204 chips with 2048 CUDA cores each. The NVIDIA Tesla M60 has 16 GB of GDDR5 memory (8 GB per core), 256-bit bus interface and has a TDP of 225-300W. The Tesla M60 is offered in a dual-slot PCI-Express card form factor and will stick with moderate clock speeds that is optimized towards 24/7 workloads. The card can handle up to 32 users simultaneously and has 36 H.264 (1080P @ 30 FPS) streams.

The interesting thing about this card is that while its aimed at a completely different market, the card is the first dual-GPU design based on the Maxwell core architecture. We can expect a consumer version of this card soon however I would personally prefer a dual-GM200 based chip since AMD has already showcased their R9 Fury X2 and GM204 is no match for the high-performance Fiji GPU core.

The second card in the lineup is the Tesla M6 which is a single GM204 GPU based card. The card is based on a cut down configuration hence we are only looking at 1536 CUDA cores. The more surprising thing is that this card is available in the MXM form factor which indicates that it is aimed at the more denser blade servers that can accommodate several of these cards in the specific form factor. The card has a TDP of 75-100W and has 8 GB of GDDR5 memory running along a 256-bit bus interface. The card is similar in specifications compared to the GeForce GTX 980M however we might just see different clock speeds on the Tesla M6. The card can handle up to 16 users and 18 H.264 (1080P @ 30 FPS) streams. Pricing for both cards are not available but they will be available on 15th September through NVIDIA partners that include HP, Dell and Cisco. 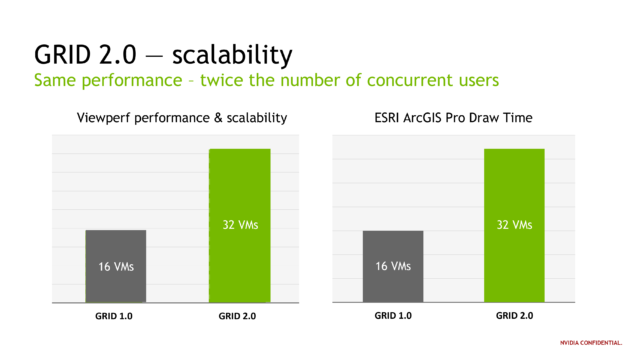 Overall, the main advantage of Grid 2.0 will be to offer twice the performance with new features, lower power consumption and more denser platforms. The Blade Servers now offer two platforms compared to just one on the traditional Grid 1.0 based products. The user density has also increased twice over Grid 1.0 which is a good increase for users looking forward to virtualization with NVIDIA's latest tech. Windows users were already fully support and now Linux users can also take advantage on Grid 2.0 and there's also newly added support for 4K monitors.