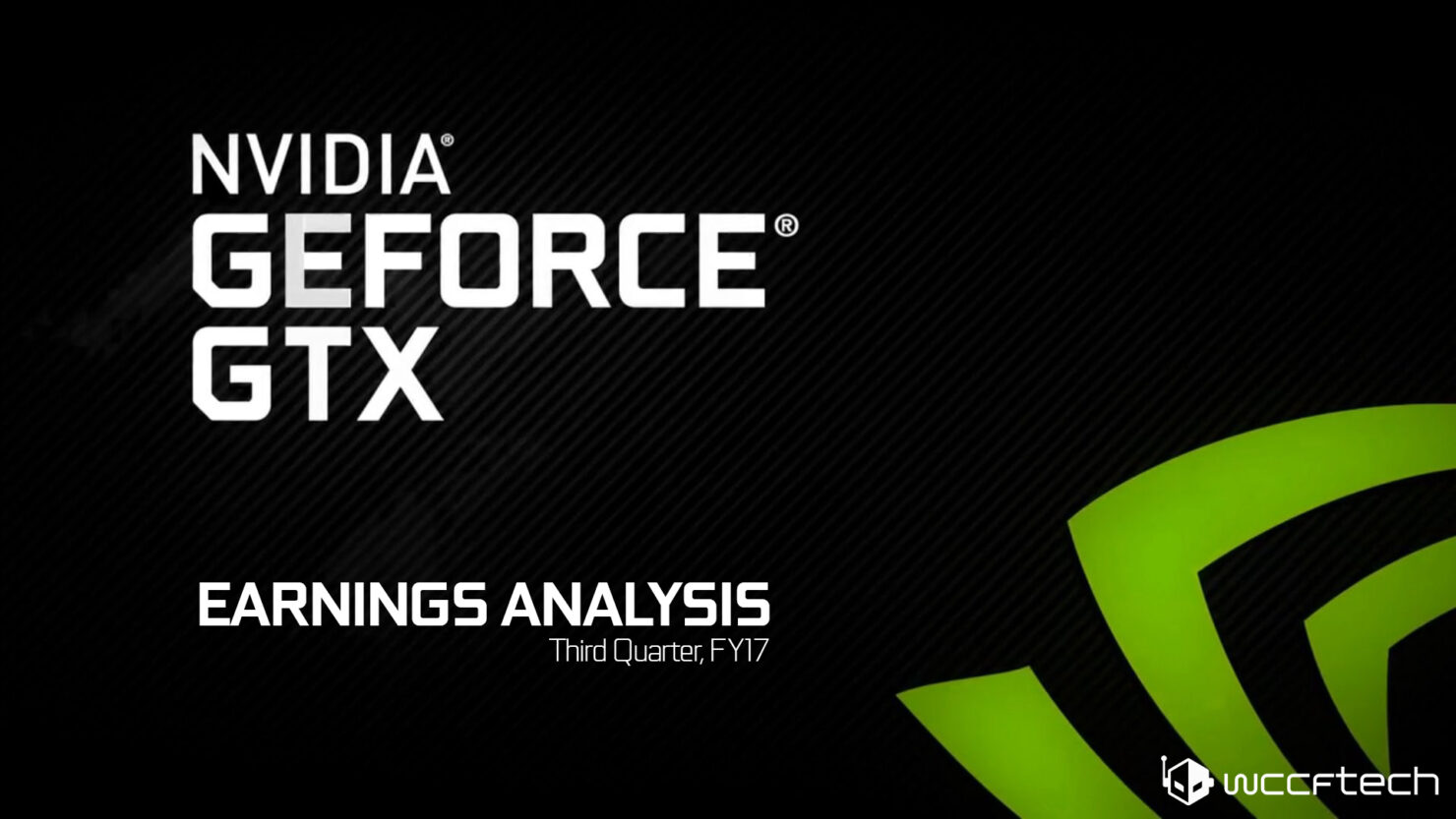 Nvidia (NASDAQ:NVDA) recently reported their financial result for the third quarter of the fiscal year 2017, and proceeded to demolish all analyst expectations by posting a record revenue of $2 Billion. That's right, Nvidia managed to up their revenue stream by 54% year over year and over 40% quarter over quarter. This is an impressive jump to say the least, but something that we have been expecting for quite some time considering a few variables we previously discussed. Nvidia shares have jumped more than 23% (at the time of writing) and are currently trading at $83.94 in response to the news. The stock closed at $67.77 last night. 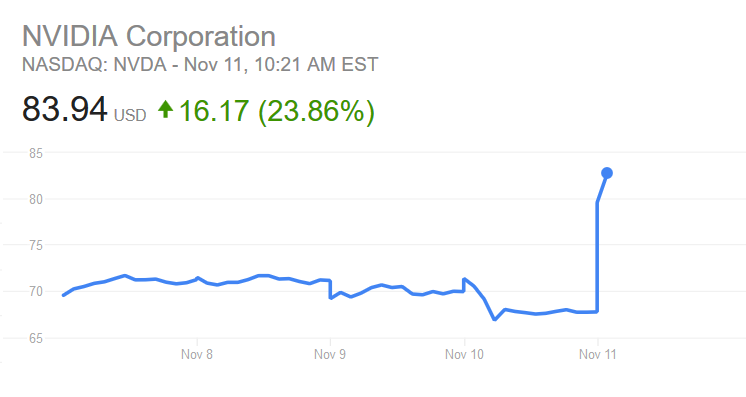 Nvidia stock has posted overnight capital gains of more than $16 per share.

Since we primarily cover advanced reporting of Nvidia products and events throughout the year, we are also in the unique position of intrinsically understanding the company's financial performance and forecasts. My objective here will be to add value to the basic report itself by adding insights and understanding of the why's and how's of the record earnings. Without any further ado, lets begin with the financial and segment highlights for this quarter:

Here are our selected, material segment highlights for the quarter:

During the first nine months of fiscal 2017, NVIDIA (NASDAQ:NVDA) paid $509 million in share repurchases and $185 million in cash dividends. As a result, the company has returned an aggregate of $694 million to shareholders in the first nine months of the fiscal year. The company intends to return a total of $1.0 billion to shareholders in fiscal 2017. The company announced a 22 percent increase in its quarterly cash dividend to $0.14 per share from $0.115 per share, to be paid with its next quarterly cash dividend on December 19, 2016, to all shareholders of record on November 28, 2016.

The real reasons behind the astronomical growth and the bottom line

Note: I do not own any stock in Nvidia, AMD or Intel, nor plan to do so for the foreseeable future.

One of the primary reasons for Nvidia faring so well has been the lack of competition in the high end GPU market from AMD. Nvidia has had a completely free run of the track with their GTX 1070 and GTX 1080 graphics card with no competition from Radeon (for the FinFET generation). The company gained more revenue in the gaming segment this quarter than all of AMD’s Computing and Graphics segment earned in their last quarter. The GTX 1070 in particular offers exceedingly high value for money as well as absolute performance and while the RX 480 matches it in value, it does not come close in terms of raw performance. Some analysts were concerned about Nvidia ceding the sub $250 market segment to AMD but as we told you in the last earnings analysis, this is not true at all, and that the chips had already taped out. Our readers, would have known the details regarding the GTX 1060, GTX 1050 and 1050 Ti leading up to its official release before hand. We believe these facts to have already been priced-in today.

In short, Nvidia (NASDAQ:NVDA)'s stellar run had two primary components: great technology and lack of real competition in some market segments. This run can be expected to continue for quite some time although it is worth mentioning that AMD is already working on the Vega 10 GPU that will herald the 14nm age of AMD's high end. That said, as far as we know, this GPU will essentially be a Fiji spec-ed port to 14nm and should have performance somewhere around the GTX 1080. A GP102 powered consumer oriented graphics card from Nvidia (currently referred to as the GTX 1080 Ti), should they choose to release it, will allow the company to easily retain dominance in the high end. We believe these facts to have already been priced-in today.

Nvidia also introduced the mobility variants of its 16nm Pascal architecture: the GTX 1080, 1070 and 1060 for notebooks. Here is the thing, just like its desktop namesakes, these chips do not have an AMD/Radeon competitor on the market right now. Boasting incredibly powerful specifications, these chips are all FinFET based GPUs that deliver high performance per watt as well as very high raw performance numbers. VR backpacks have been adopting Nvidia's high end mobility chips readily and this is expected to continue. On this front, we have some more advance reports to share with our readers. The company is currently prepping the mobility variants for the GTX 1050 which will be able to provide the same level of value and performance to the mid and low end mobility market. We do not believe this been completely priced-in (the share price) as of today.

Finally, lets talk about the consistent auto growth. I have talked in detail about how Nvidia GPUs previously used to power just the infotainment systems on Tesla vehicles while the autopilot was all Mobileye. In last quarter's earnings, I specifically talked about how Nvidia's GPGPU implementation of autonomous driving is much more flexible, much more powerful than Mobileye's and one of its greatest intrinsic strengths. Tesla realized the need for a new and improved AutoPilot system and has since enlisted the Nvidia Drive PX 2 and Xavier chips to power its Next Generation of AutoPilot. Keep in mind if this is successful, it means a completely new (and very significant) stream of revenue in the years to come for Nvidia. We do not believe this has been priced-in (the share price) as of today.

I will end the earnings breakdown on a slightly cautionary note. The explosive growth seen by the company today was driven by a lot of external factors in the market (including the lack of any real competition in many places) and not just by fundamental growth. While my overall outlook on Nvidia remains bullish, it is my duty to point out that this stellar growth might fall prey to changing market circumstances (as mentioned above) by next quarter. Successful competition from AMD in all segments, while improbable (the company is focusing alot on Zen right now), could achieve this effect and if this happens a slight correction can be expected from the stock. 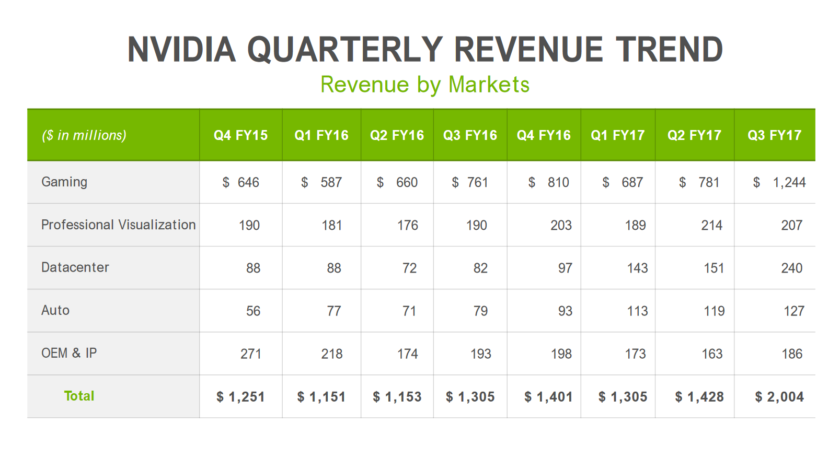 Nvidia (NASDAQ:NVDA)'s quarterly breakdown shows that Nvidia experienced strong sequential and yearly growth in nearly all segments. Nvidia's graphics segment jumped up by almost 63% year over year as well as very strong growth quarter over quarter. The real star in terms of pure growth however, was the Datacenter segment which showed a yearly increase of 193% and a quarterly growth of 59%! Automotive showed its consistent and gradual growth, both in terms of Y/Y and Q/Q. Professional Visualization was down quarter over quarter and the only segment to actually go down yearly was OEM and IP which was down 4%. This can easily be explained by Nvidia's movement away from the OEM ideology in general.

Our outlook for the fourth quarter of fiscal 2017 is as follows: