There are three different GPUs that will be part of the GeForce GTX 10 series notebook family. These include the GTX 1080, GTX 1070 and the GTX 1060. The GTX 1080 and GTX 1070 GPUs are based on the GP104 GPU architecture while the GTX 1060 comes with the GP106 GPU architecture. While these chips are built for the notebook platforms, they are very similar in terms of specifications compared to their desktop designs (except the GTX 1070).

While achieving all of this unbeatable performance, the ultra-efficient Pascal architecture delivers up to 30% more battery life compared to Maxwell laptops, allowing you to game for longer in trains, planes and automobiles, and at any time you’re away from a power outlet. via GeForce 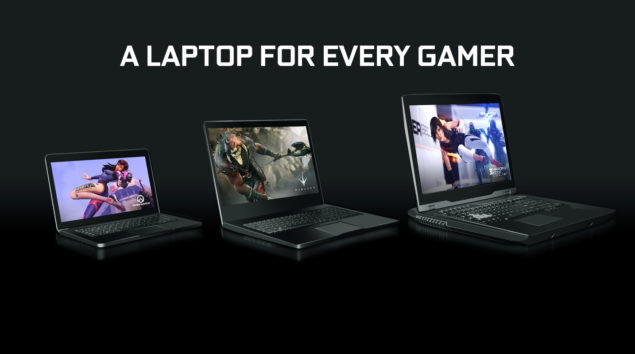 Available in various form factors on the notebook platform, the Pascal architecture offers longer battery life compared to Maxwell GPUs and record breaking performance. Let's take a closer look at the specifications of these GPUs.

The GeForce GTX 1080 is the flagship chip of the lineup. The chip is based on the full GP104 die which houses 2560 CUDA cores, 160 TMUs and 64 ROPs. The chip is the first mobility solution to utilize GDDR5X memory or G5X in short. This memory is clocked at 10 GHz to deliver a bandwidth of 320 GB/s. The memory runs along a 256-bit bus interface. The TDP for the GTX 1080 would be set around 150W since it is a full fledged GP104 core.

The GeForce GTX 1070 (Mobility) features 2048 CUDA cores, 170 TMUs and 64 ROPs. This chip may look like it’s faster than the desktop variant but it’s actually tuned to perform as similar as the GeForce GTX 1070 (Desktop) variant. If you look closely at the clock speeds, we are getting 1442 MHz core and 1645 MHz boost clocks out of this variant while memory is clocked at 8 GHz. The chip features 8 GB GDDR5 memory featured across a 256-bit bus and TDP is expected around 120W.

The NVIDIA GeForce GTX 1060 (Mobility) is a mainstream gaming design that comes with the GP106 GPU. This is in fact the same GPU configuration as the GTX 1060 (Desktop) but with lower clock speeds. You get 1280 CUDA Cores, 128 TMUs and 48 ROPs from this variant. This variant is clocked at 1404 MHz core and 1670 MHz boost clocks with VRAM clocked at 8 GHz. The chip comes with 6 GB of GDDR5 memory running along a 192-bit bus interface that would pump 192.2 GB/s bandwidth. 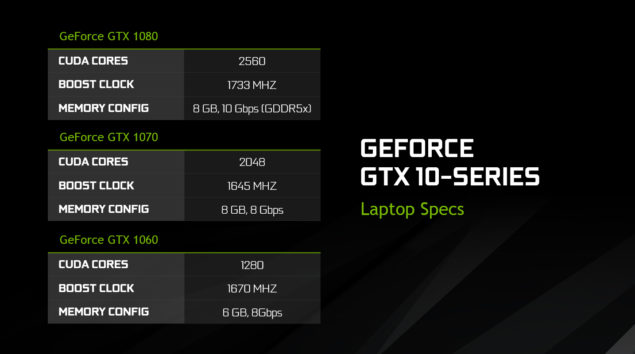 This lineup is the first from NVIDIA that will maintain performance parity with their desktop offerings. All chips being based on the same Pascal architecture ensure that you would be getting the same level of efficiency and features as the desktop products such as DirectX 12, Vulkan API support, NVIDIA ANSEL, NVIDIA Gameworks, NVIDIA SMP (Simultaneous-Multi-Projection) support. All chips would also be VR-Ready and offer a wide array of display capabilities such as 4K/8K and HDR on laptop displays that support them.

To further harness the efficiency of the Pascal architecture, we’ve refined our BatteryBoost power-saving technology for the release of the new GTX 10-Series laptops. This new iteration of BatteryBoost better-controls framerates to prevent hitching and stuttering, whilst also optimizing CPU-GPU communication to reduce power usage and deliver a great unplugged gaming experience. via GeForce

The chips are also built using high quality components that allow higher overclocking compared to Maxwell. With Dual-FET PWM delivery, Multi-Phase power controllers and factory overclock support, you can expect these chips to offer enthusiasts a lot for their money.

The following notebooks are available in various configurations based on the different Pascal GPUs and Intel Skylake CPUs. MSI has a vast list of products in their lineup ranging from single chip to SLI designs that can be seen below: