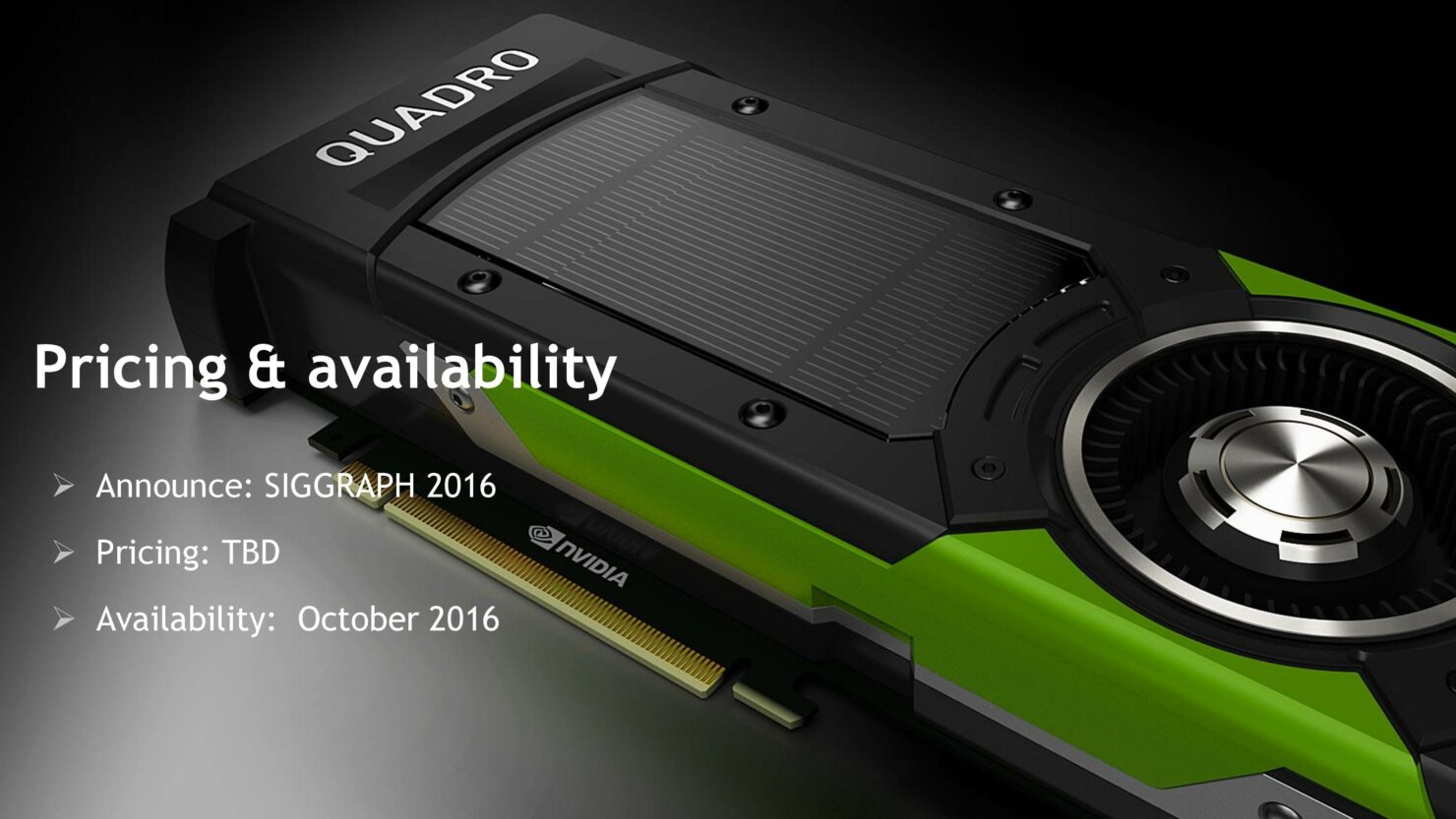 NVIDIA is going to unleash their fastest professional graphics cards based on the Pascal architecture later this year. Based on the fastest Pascal chips, NVIDIA has announced their next-generation Quadro P6000 and P5000 solutions which come with better efficiency compared to past generation offerings along with faster and dense memory capacities. These GPUs redefine how developers and content creators produce the next generation VR and visualization content for their audiences.

According to NVIDIA, their Quadro lineup based on the Pascal architecture will include two cards. The high-end Quadro P6000 and the Quadro P5000 professional cards. The reason I call both of these high-end are because both utilize the full die configuration of the GP102 and GP104 cores. Now it is really interesting that NVIDIA is already offering a full variant of their GP102 graphics core on a Quadro variant.

NVIDIA's Quadro line of graphics cards are built for professional tasks which offer the best FP32 compute. In the case of Quadro P6000, we will be looking at the fastest FP32 compute along with FP16 and INT8 processing that NVIDIA is also offering on their Titan X graphics card. The Tesla cards are reserved for FP64 tasks and NVIDIA has already announced three cards for such markets. For full specs, you can read the following details. 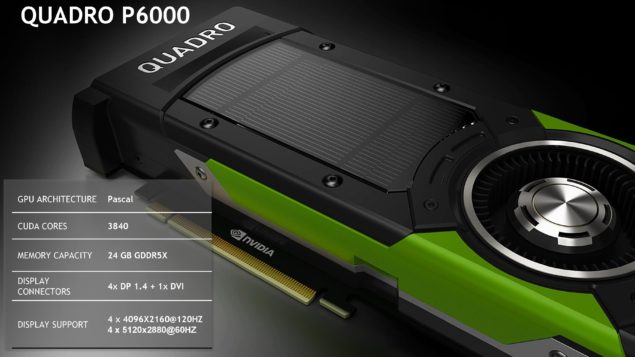 The NVIDIA Quadro P6000 is the flagship Quadro solution which will be available later this year. This solution comes with the full GP102 configuration which features the same CUDA core count as the GP100. We will be looking at 3840 CUDA cores, 240 TMUs and 96 ROPs. In terms of clock speeds, we can expect a boost clock of around 1.5 GHz which has been a common sight on the Pascal cards. The card features 24 GB of GDDR5X VRAM which is clocked at 10 GB/s. 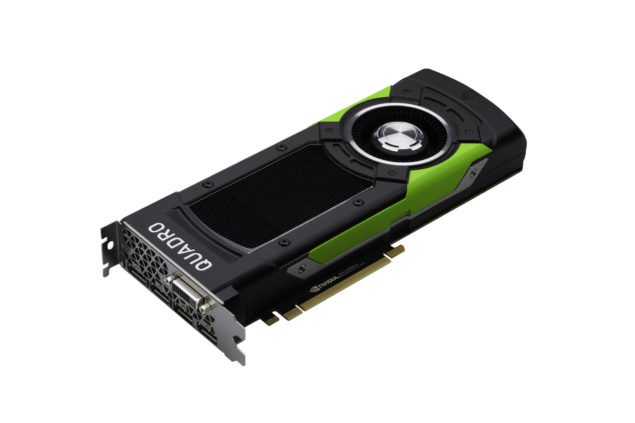 The memory is configured along a 384-bit bus interface and the reason why it has twice the memory as the new Titan X card is that not only it ships later in the market but it also comes with a full die config of GP102 and high cost. The Titan X is a very affordable solution for professional users when we consider the pricing of the Quadro part but professional cards have always come at a higher price due to fine tuned drivers and better optimization for single precision tasks and professional workloads.

The TDP for this card is configured at 250W and powered by a 8+6 Pin configuration which is similar to the Titan X. Cooling is provided by a large aluminum cooler that features an advanced vapor chamber heatsink that gets air pushed in by a blower fan. The cooler shroud features a black and green color scheme along with a Quadro branding etched on the front. Display ports include four Display Port 1.4 and a single DVI-D connector. Both the P6000 and P5000 are designed to run up to four 5K displays at 60 Hz refresh rate. 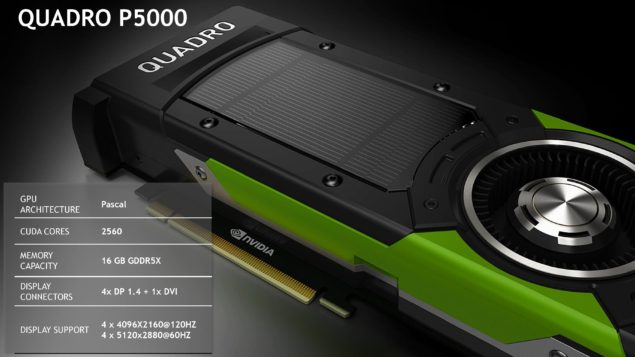 The Quadro P5000 is the second card to feature a full Pascal die, GP104 in this case. NVIDIA GP104 has already been featured on the fastest GeForce GTX 1080 graphics card and it's now coming to consumers. The core has higher clock speeds which means that users will be able to obtain some decent FP32 and FP16 numbers out of this card. 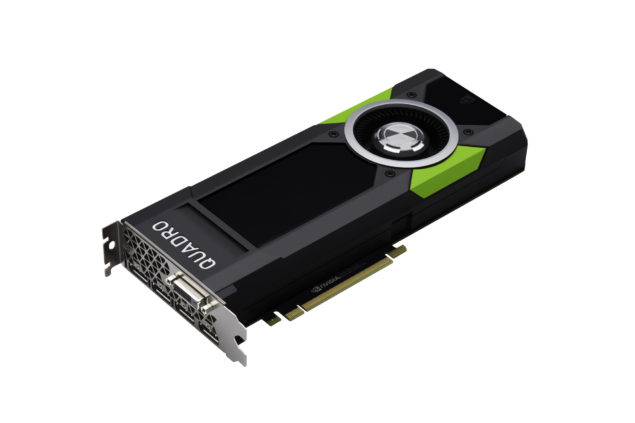 As for specifications, the card features 2560 CUDA cores, 160 TMUs and 64 ROPs. The core clocks are not known but they would be some what slower than the GeForce solutions or comparable. The Quadro P5000 card would feature 16 GB of GDDR5X memory, that is twice the VRAM featured on the GeForce GTX 1080. This shows that VRAM still plays an important role in professional content creation where large samples need to be loaded and run of the graphics memory. The clock speed for the memory is configured at 10 GB/s along a 256-bit bus which gives us 256 GB/s bandwidth compared to 480 GB/s on the Quadro P6000.

The GP102 GPU die also comes with GDDR5X support since it technically supports the memory standard and not HBM2 like its bigger GP100 sibling. Also what's missing on GP102 is NVLINK which fortunately isn't a big game changer for the professional work which are based on solutions built on PCI-Express platforms. 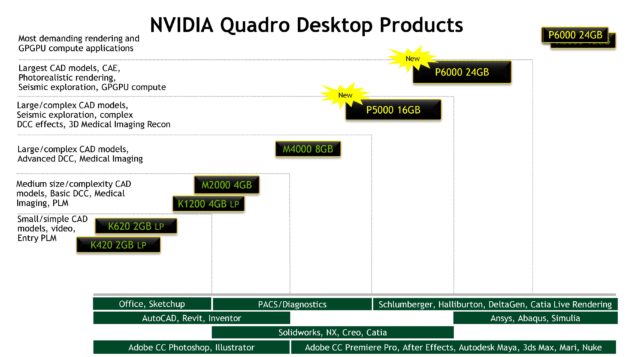 The GP102 GPU also has similar Dual Precision support as GP104 which is non-existent since that department is better handled by GP100 which is specifically built for HPC / FP64 tasks. The GP102 being derived of such hardware is much smaller and easier to manufacturer hence yields would be higher compared to the 15.3 billion transistor part.

As mentioned before, the prime purpose of these solutions is to deliver the best performance in CAD workloads and photo-realistic rendering through raytracing. These cards are fully compliant with NVIDIA' DesignWorks, VR Works, GameWorks technologies along with DirectX 12, Vulkan, OpenGL, OpenCL, IRAY SDK and latest CUDA suite support.

With the Quadro announcement, NVIDIA has shown a very dominant position against its competitors in all GPU fields that include Gaming, Professional and HPC. Pascal is geared up and ready to deliver the best performance in these fields being the fastest graphics offering to users. Both cards will be hitting the market in October 2016 which is a month away from the Titan X launch in August 2016.