NVIDIA has unveiled their fastest graphics card yet, the Pascal based Titan X Graphics Card.

Don't let the Titan X name fool you, what you are looking at is Titan X rebuilt with the next generation Pascal GP102 graphics core which is the ultimate GPU designed for enthusiast gamers who want 4K performance at the smoothest 60 FPS frame rate. The GeForce GTX Titan X (Pascal) is the next greatest graphics card which will be available in just two months to users who want the best gaming performance inside their PCs so its time to take a detailed look at this bad boy.

The new NVIDIA TITAN X, introduced today, based on our new Pascal GPU architecture, is the biggest GPU ever built. It has a record-breaking 3,584 CUDA cores.

We said our GTX 1080 delivers an “irresponsible amount of performance.” It was a bit reckless. But this is even more reckless. via NVIDIA Blogs

The GeForce GTX Titan X (Pascal) is based on the latest GP102 GPU core. This isn't the GP100 GPU but a derived version of the same core built and optimized for gamers. Since GP100 utilizes NVLINK, the GP102 GPU has been made to perform best with PCI-Express based platforms, especially the GeForce market. it doesn't means that consumers won't get an HBM2 based graphics card down in the roadmap. Actually, a HBM2 variant for GeForce market is planned for next year. For now, we will be getting GeForce variants with the fastest available GDDR5 interface which is known as GDDR5X.

The compute numbers of these cards are a leap beyond what we have seen on any consumer card with the GPU touching 11 TFLOPs of single precision and 44 TOPs INT8 calculations (new deep learning instructions). 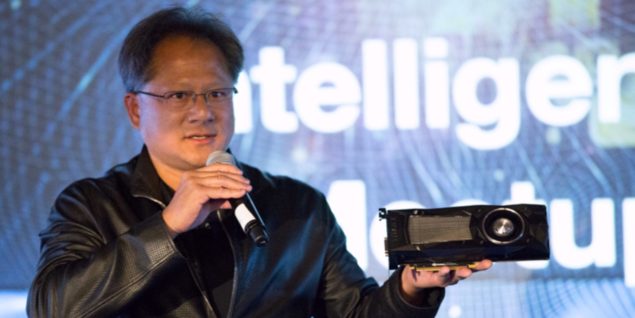 The GeForce GTX Titan X (Pascal) comes with 12 GB of GDDR5X which is clocked at 10 GB/s and delivers 480 GB/s which is just about the same amount that HBM1 delivered (512 GB/s). We can see that HBM2 is still not that widely available for use in consumer grade cards but GDDR5X can cover it up with enough bandwidth to feed the GPU.

Talking about performance, the card is said to be 70% faster than the first Titan X graphics card. This is insane as we are finally going to be looking at a card that can achieve 4K 60 FPS gaming performance. As for other metrics that include power, display capabilities, the GTX Titan X is fully compliant with all the features that NVIDIA has showcased for their Pascal generation of GPUs such as SMP (Simultaneous Multi-Projection), HDR Support, 8K 60 FPS gaming etc.

The GeForce GTX Titan X will be available on 2nd August at a hefty price tag of $1200 US.

The cooler is also a very sexy thing to look at and just like every other Titan that came before it, the card will only be available in this model aside from some custom AIO variants that utilize the same PCB. The card has NVIDIA's next-gen NVTTM design with a tessellated cooler shroud that has been colored black. The GeForce GTX 1080 and GTX 1070 used the same cooler but with a silver colored shroud which also looked great. The card would feature a 8+6 Pin power configuration and a TDP of 250W.

The GeForce GTX Titan X (Pascal) will be available on 2nd August 2016 in North America and Europe for a price of $1200 US. NVIDIA will be selling it directly from their website while the card will also be available in pre-built systems from OEMs. NVIDIA has also mentioned that the card will be launching in Asia very soon.

Which NVIDIA Pascal card looks more impressive to you?