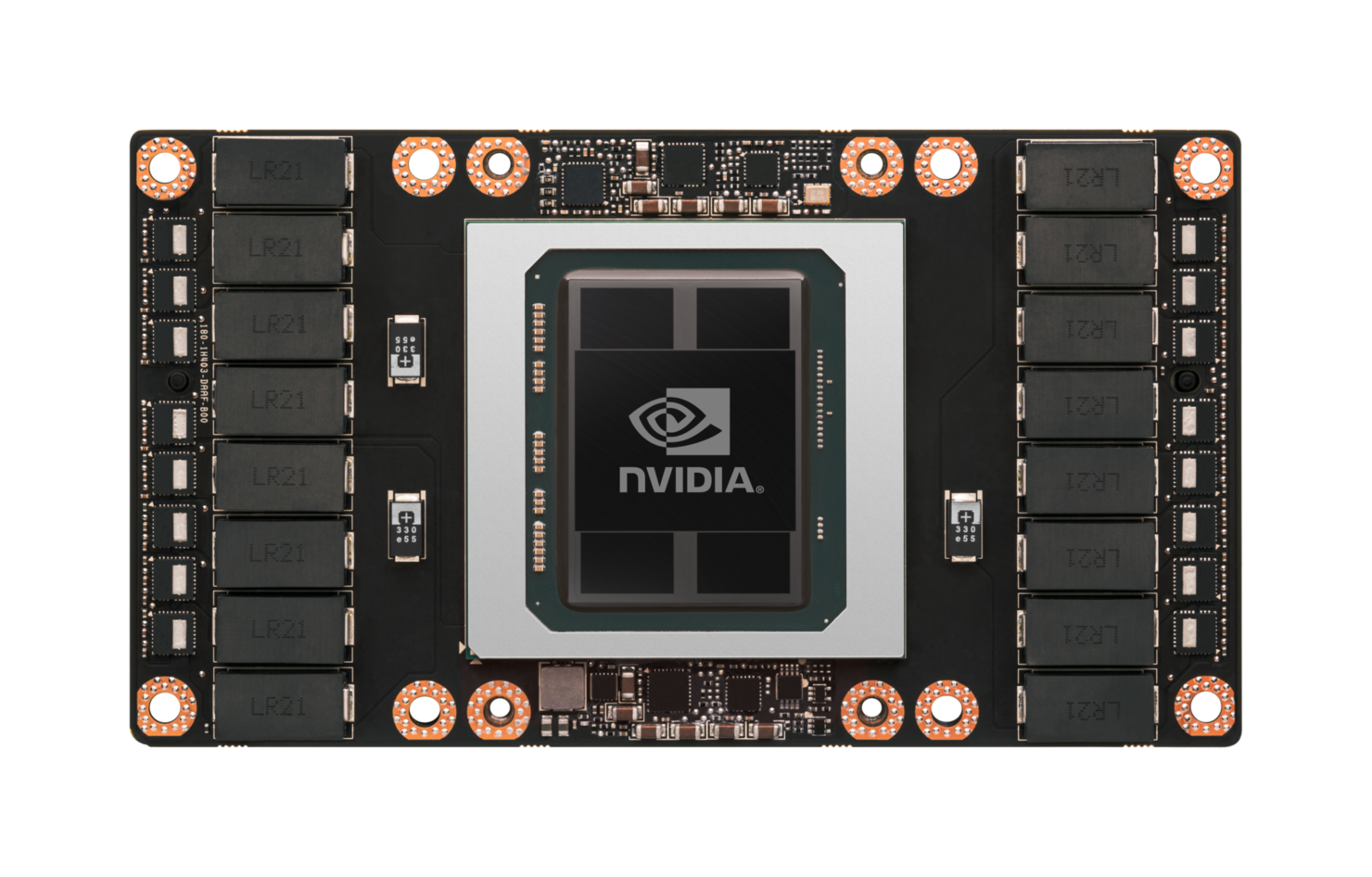 NVIDIA has just announced that they will be launching a PCI Express based version of their Tesla P100 GPU accelerator which is designed for hyper scale computing. The Tesla P100 which utilizes the GP100 GPU was initially announced back at GTC 2016 as the first graphics board to utilize HBM2 standard and NVLINK inter connect from NVIDIA. Today, NVIDIA is introducing two new products to their Tesla P100 family.

The NVIDIA Tesla P100 is the most advanced hyper scale graphics accelerator built to date.

Based on the GP100 GPU, the Tesla P100 is NVIDIA's most advanced and most powerful GPU ever designed for HPC and Datacenter platforms. These GPUs are designed to supercharge HPC applications by more than 30X compared to current generation solutions. The new PCI-Express solutions are designed for the datacenter and HPC market to make them compatible with current GPU accelerated servers as the previous Tesla P100 used a mezzanine connector which required the utilization of new servers. Both cards are optimized to power the most computationally intensive AI and HPC data center applications. 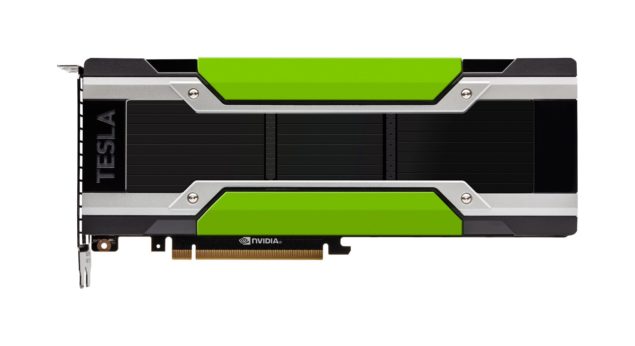 NVIDIA’s Tesla P100 is the most fastest supercomputing chip in the world. It is based on an entirely new, 5th Generation CUDA architecture codenamed Pascal. The GP100 GPU which utilizes the Pascal architecture is at the heart of the Tesla P100 accelerator. NVIDIA has spend the last several years in the development of the new GPU and it will finally be shipping in June 2016 to supercomputers.

The Tesla P100 comes with beefy specs. Starting off, we have a 16nm Pascal chip that measures in at 610mm2, features 15.3 Billion transistors and comes with 3584 CUDA cores. The full Pascal GP100 chip features up 3840 CUDA Cores. NVIDIA has redesigned their SMs (Streaming Multiprocessor) units and rearranged them to support 64 CUDA cores per SM block. The Tesla P100 has 56 of these blocks enabled while the full GP100 has 60 blocks in total. The chip comes with dedicated set of FP64 CUDA Cores. There are 32 FP64 cores per block and the whole GPU has 1792 dedicated FP64 cores. 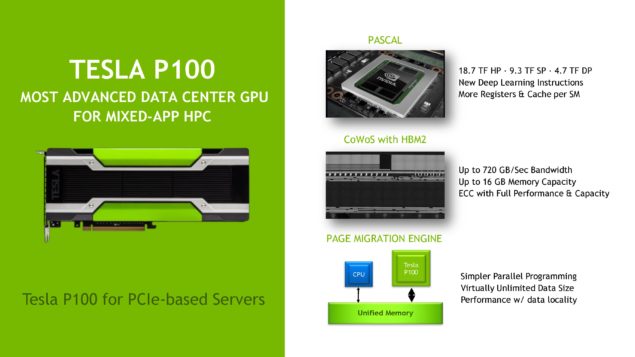 The 16nm FinFET architecture allows maximum throughput of performance and clock rate. In the case of Tesla P100 solution that has been optimized for NVLINK capable servers, we are looking at 5.3 TFLOPs of double precision, 10.6 TFLOPs of single precision and 21.2 TFLOPs of half precision compute performance. The NVLINK variants come with 16 GB of HBM2 VRAM that delivers up to 720 GB/s bandwidth while NVLINK interconnect adds 60 GB/s bandwidth in addition to the 32 GB/s from the PCI-Express interconnect.

The PCI-Express optimized variants are optimized for lower clocks. These cards have TDP set to 250W so we are looking at slightly lower clock speeds than the NVLINK optimized variant. Both cards deliver 4.7 TFLOPs double, 9.3 TFLOPs single and 18.7 TFLOPs mixed precision compute performance. These 16 GB variant comes with total bandwidth of 720 GB/s while the 12 GB HBM2 variant comes with 540 GB/s bandwidth. The cards will use the PCI-Express interconnect (32 GB/s) for simultaneous connection between multiple GPUs. 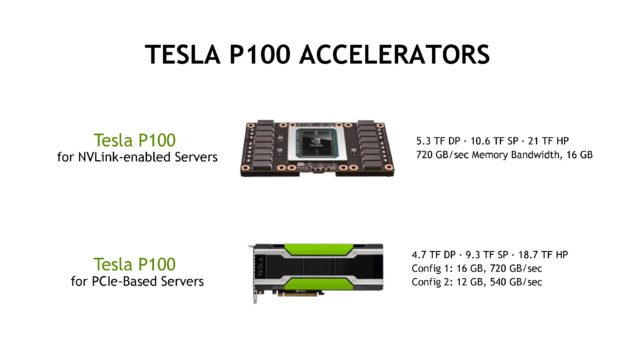 "Tesla P100 accelerators deliver new levels of performance and efficiency to address some of the most important computational challenges of our time," said Thomas Schulthess, professor of computational physics at ETH Zurich and director of the Swiss National Supercomputing Center. "The upgrade of 4,500 GPU-accelerated nodes on Piz Daint to Tesla P100 GPUs will more than double the system's performance, enabling researchers to achieve breakthroughs in a range of fields, including cosmology, materials science, seismology and climatology." via NVIDIA 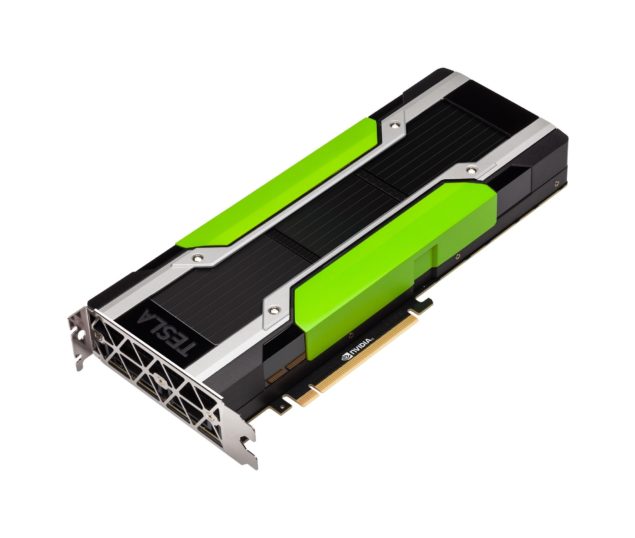 NVIDIA's GP100 based Tesla P100 board is already shipping to the latest supercomputers that utilize NVLINK technology. The graphics board would also be available with NVIDIA's DGX-1 supercomputer rack later in June. The PCI-Express based products are expected to be available in Q4 2016 from NVIDIA partners and server makers including Cray, Dell, Hewlett Packard Enterprise, IBM and SGI. The NVLINK board will be available in Q1 2017 through NVIDIA partners.