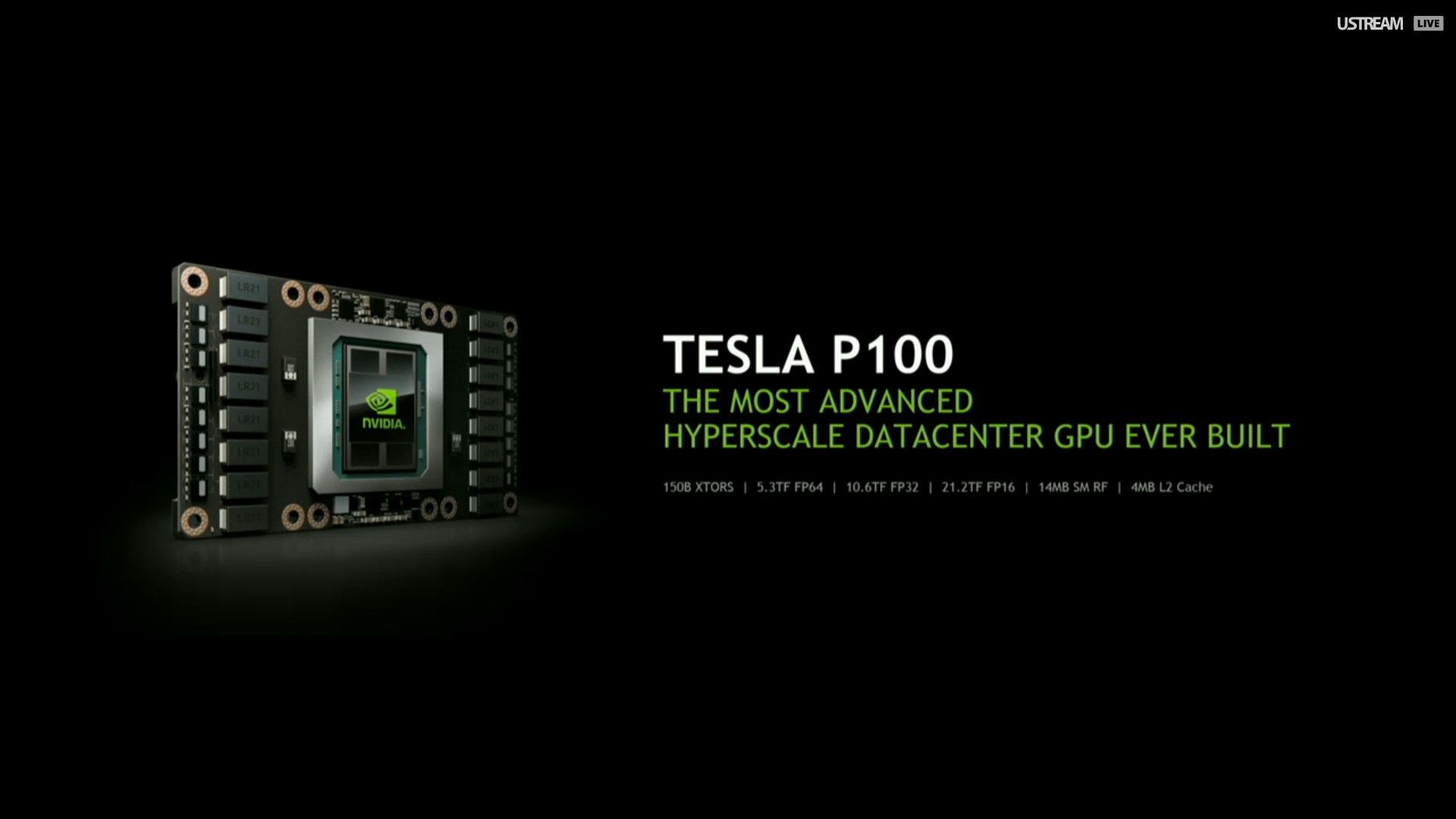 Nvidia claims that GP100 is the largest FinFET GPU that has ever been made, measuring at 600mm² and packing over 15 billion transistors.  The Tesla P100 features a slightly cut back GP100 GPU and delivers 5.3 teraflops of double precision compute, 10.6 TFLOPS of single precision compute and 21.2 TFLOPS of half precision FP16 compute. Keeping this massive GPU fed is 4MB of L2 cache and a whopping 14MB worth of register files.

The entire Telsa P100 package is comprised of many chips not just the GPU, that collectively add up to over 150 billion transistors and features 16GB of stacked HBM2 VRAM for a total of 720GB/s of bandwidth. Nvidia's CEO & Co-Founder Jen-Hsun Huang confirmed that this behemoth of a graphics card is already in volume production with samples already delivered to customers which will begin announcing their products in Q4 and will be shipping their products in Q1 2017.

The GP100 GPU is comprised of  3840 CUDA cores, 240 texture units and a 4096bit memory interface. The 3840 CUDA cores are arranged in six Graphics Processing Clusters, or GPCs for short. Each of these has 10 Pascal Streaming Multiprocessors. As mentioned earlier in the article the Tesla P100 features a cut down GP100 GPU. This cut back version has 3584 CUDA cores and 224 texture mapping units.

Perhaps one of the most exciting, yet perhaps predictable, revaluations about the GP100 Pascal flagship GPU is that it can achieve clocks even higher than Maxwell. Despite Nvidia opting for very conservative clock speeds on its professional GPUs like the Tesla & Quadro products the P100 actually has a base clock speed of 1328mhz and a boost clock speed of 1480mhz. Considering that GPU Boost 2.0 actually allows these cards to operate at even higher clock speeds than the nominal boost clock.

We're looking at actual frequencies of upwards of 1500Mhz on the GeForce equivalent of the P100. What is inevitably going to launch as the next GTX Titan. This means boost clocks of even upwards of 1600Mhz on factory overclocked models, and perhaps 2Ghz+ manual overclocks. This should be extremely exciting news to all GeForce fans.

There are four hallmark technologies for the Pascal generation of GPUs. Namely HBM, mixed precision compute, NV-Link and the smaller, more power efficient TSMC 16nm FinFET manufacturing process. Each is very important in its own right and as such we're going to break down everyone of these four separately.

Stacked memory will debut on the green side with Pascal. HBM Gen2 more precisely, the second generation of the SK Hynix AMD co-developed high bandwidth  JEDEC memory standard.  The new memory will enable memory bandwidth to exceed 1 Terabyte/s which is 3X the bandwidth of the Titan X. The new memory standard will also allow for a huge increase in memory capacities, 2.7X the memory capacity of Maxwell to be precise. Which indicates that the new Pascal flagship will feature 32GB of video memory, a mind-bogglingly huge number.

We've already seen AMD take advantage of HBM memory technology with its Fiji XT GPU last year. Which features 512GB/S of memory bandwidth, twice that of the GTX 980. AMD has also announced last month at its Capsaicin event that it will be bringing HBM2 with its next generation Vega architecture, succeeding its 14nm FinFET Polaris architecture launching this summer with GDDR5 memory.

However due to its very attractive power efficiency advantages over FP32 and FP64 it can be used in scenarios where a high degree of computational precision isn't necessary. Which makes mixed precision computing especially useful on power limited mobile devices. Nvidia's Maxwell GPU architecture feature in the GTX 900 series of GPUs is limited to FD32 operations, this in turn means that FP16 and FP32 operations are processed at the same rate by the GPU. However, adding the mixed precision capability in Pascal means that the architecture will now be able to process FP16 operations twice as quickly as FP32 operations. And as mentioned above this can be of great benefit in power limited, light compute scenarios.

Pascal will also be the first Nvidia GPU to feature the company's new NV-Link technology which Nvidia states is 5 to 12 times faster than PCIE 3.0.

Pascal brings many new improvements to the table both in terms of hardware and software. However, the focus is crystal clear and is 100% about pushing power efficiency and compute performance higher than ever before. The plethora of new updates to the architecture and the ecosystem underline this focus.

Pascal will be the company's first graphics architecture to use next generation stacked memory technology, HBM. It will also be the first ever to feature a brand new from the ground-up high-speed proprietary interconnect, NV-Link. Mixed precision support is also going to play a major role in introducing a step function improvement in perf/watt in mobile applications.