Project CARS 2 is the second installment of the popular racing title from developer Slightly Mad Studios and publisher Bandai Namco. The game is challenging, fun and most importantly improves on the original from almost every aspect. In this particular article we're going to focus on one aspect however, how the game runs and looks. If you're interested in finding out more about how the game actually plays, make sure to check out our review here.

The original game was a famous system buster. The game was quite challenging to run smoothly. It was quite the CPU hog and at the time required no less than a thousand dollar GPU to run at 60 FPS 1080p with all graphics settings maxed out . The new one however manages to look better and run better, but make no mistake Project CARS 2 is still a demanding title. So let's dig into the numbers.

All benchmarks are courtesy of GameGPU.com

At 1080p with settings maxed out you will need at least a GTX 1070 from NVIDIA or an RX Vega 56 for a 60 FPS+ average. The RX Vega 56 wasn't actually included in the tests unfortunately, but the consistently slower R9 Fury X manages to deliver a 57 FPS average so it's safe to assume that a Vega 56 will be able to deliver more than that. If you're willing to sacrifice some image quality settings we believe you should be able to hit that 60 FPS figure with a GTX 1060, which averages 54 frames a second at max settings. 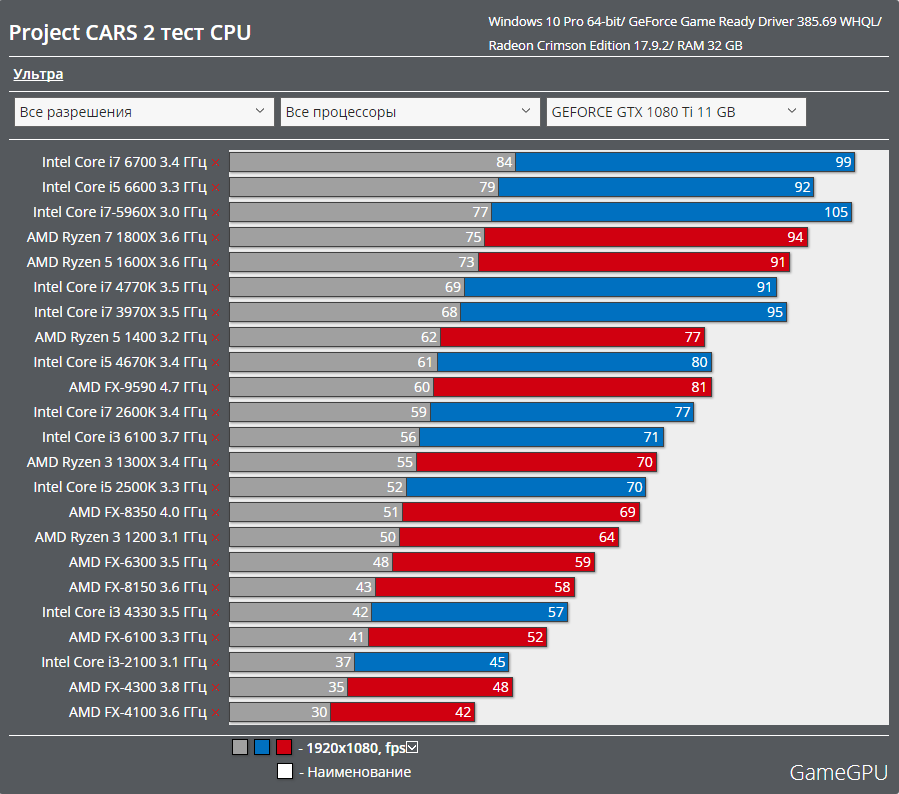 Moving on to the CPU side of the performance equation you can quickly tell that the game LOVES CPU cores, the more the better. We see very clear scaling from four threads, 8 threads 12 threads and all the way to 16 threads. The scaling is especially evident when looking at the Sandy Bridge i5 2500K, i7 2600K and i7 3970X as well as the AMD Ryzen lineup. This is a massive improvement over the game's predecessor which was heavily reliant on single-threaded performance.

So there you have it folks. If you own both titles please share your experience in the comments below. Does the sequel run better on your machine?