NVIDIA's next-gen GPU is getting unveiled really soon and while GTC has been moved to an online-only event, that isn't holding the green giant back from announcing its biggest GPU to date. We got to see leaked specifications of two unreleased GPUs a few days ago but it looks like a new SKU has been spotted by Twitter fellow W_At_Ar_U, and the latest chip is a beast of its own with a total core count of almost 8K cores.

The NVIDIA Next-Generation GPU architecture, which is reportedly codenamed Ampere, has been known for a while. It will go on to power the company's latest Tesla GPUs which are going to be used by the top HPC and cloud datacenter organizations.

According to the Vice President of Information Technology and the Chief Information Officer at Indiana University, who will be deploying their Big Red supercomputer this summer, it was revealed that NVIDIA's next-generation GPUs offer a massive 75% performance uplift over existing Volta-based GPUs. There are also similar reports which we have heard in the past with the GPUs offering up to 50% performance increase with twice the efficiency which would be an incredible feat to pull off.

So coming to the specifications of the latest GPU which has been spotted in Geekbench, I will also be comparing it to the previously leaked parts to see what kind of performance uplift we should be expecting from all of the variants. Do note that these GPUs were tested all the way back in October and November of 2019 so they have been hiding in the Geekbench database for a few months now, but the specifications would definitely have seen big changes as these are still early samples. The other thing to note here is the lower clock speeds which point out the early designs as I have mentioned.

The first GPU to talk about is the one that was just recently spotted. This GPU features a total SM count of 124 which equals 7936 CUDA cores since NVIDIA's professional GPU architecture comes with a 64 CUDA Core design per streaming multiprocessor. This is also a 55% increase in CUDA cores over the Tesla V100's 5120 Cores. The GPU has a maximum clock speed of 1.1 GHz and at this unfinalized clock, it should deliver around 17.5 - 18 TFLOPs of FP32 horsepower. 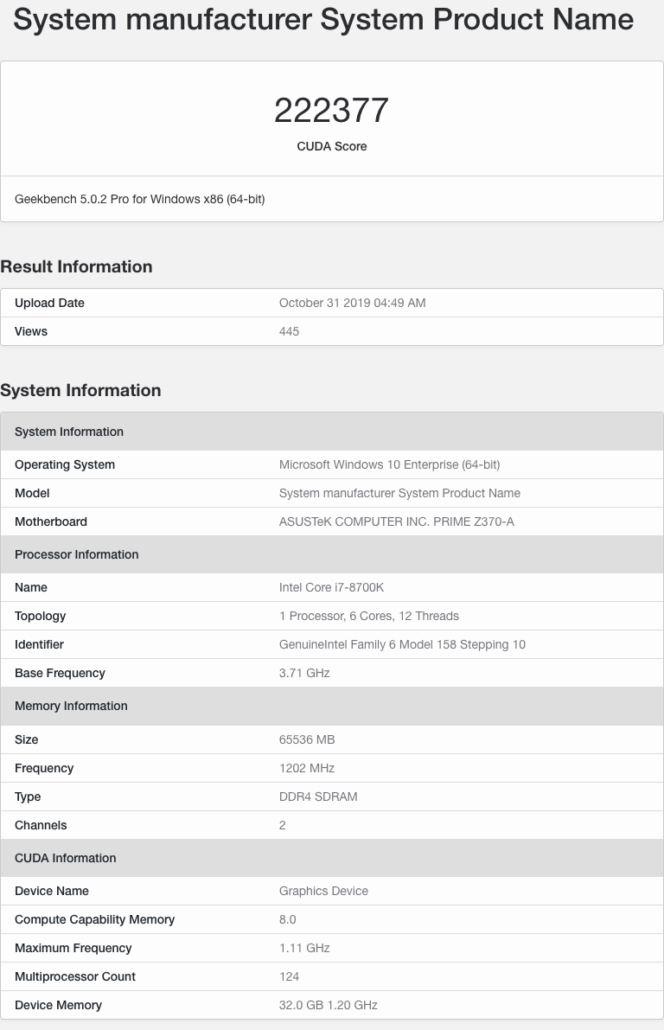 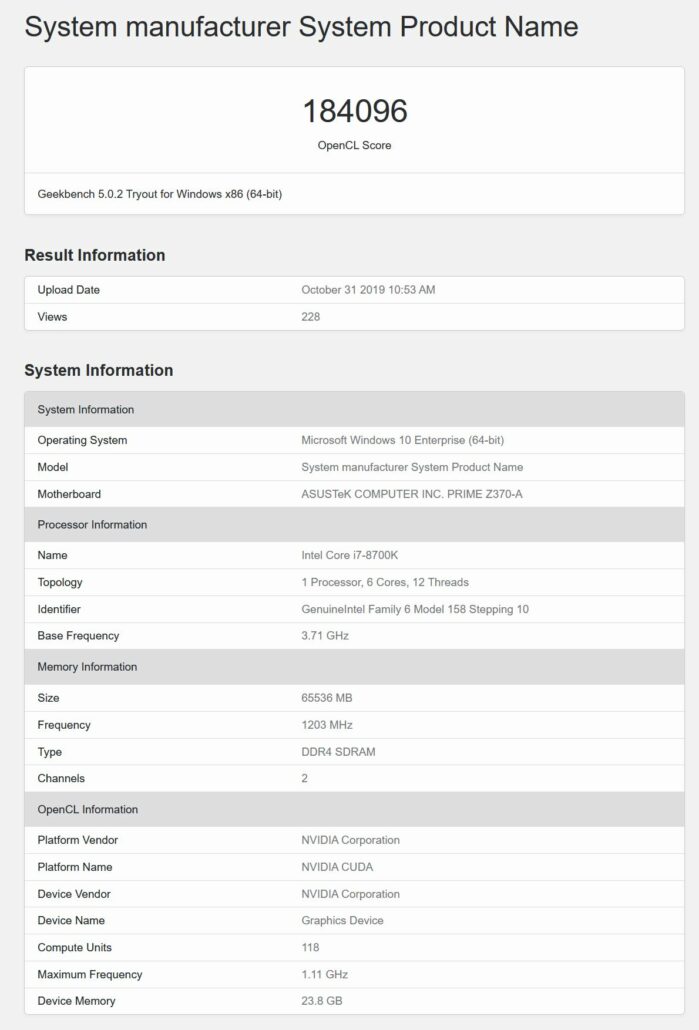 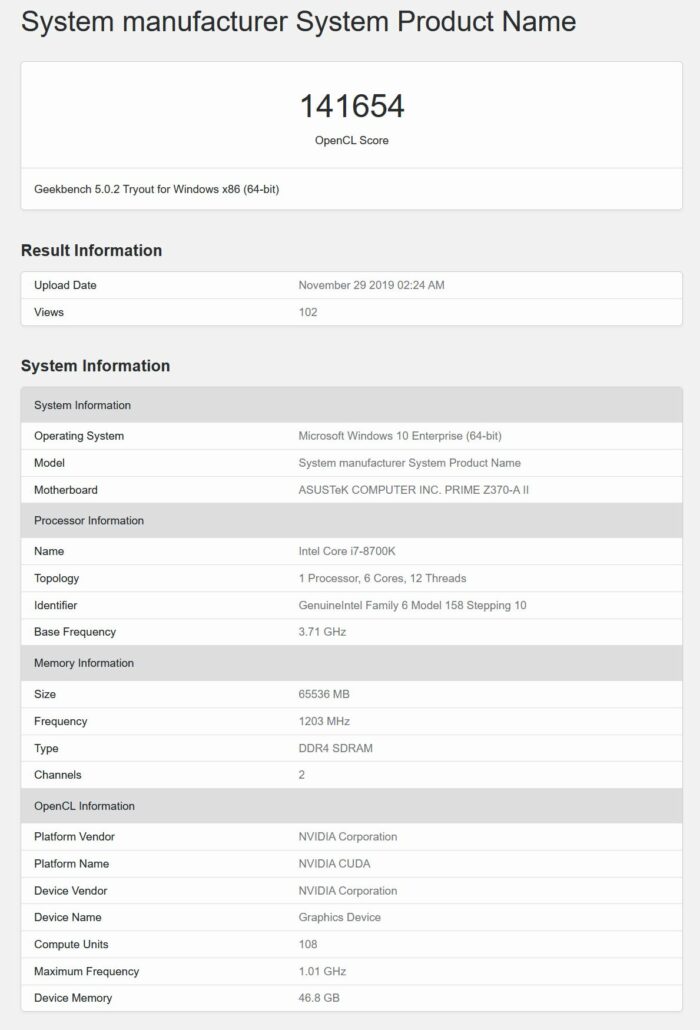 It is interesting however that the lower-end GPU features more memory capacity which may mean two things, either NVIDIA would have lower-end GPUs with higher memory capacities for specific workloads or each GPU would have different memory configurations and the 48 GB HBM2e could be the highest memory configuration for this particular GPU SKU. The other most interesting thing you can tell from this specifications leak is that while the next-gen Tesla lineup will have various GPU SKUs, the full GPU should definitely peak at 8192 CUDA cores packed in 128 SMs.

Just like the Volta GV100 GPU, the full fat (next-gen) GPU may never be available to the public since the Tesla V100 peaked at 5120 CUDA cores (80 SMs) despite the full chip containing 5376 CCs or 84 SMs. In a previous interview, NVIDIA's CEO, Jensen Huang, had confirmed that the majority of the orders for their next-generation 7nm GPU will be handled by TSMC while a small portion will be sent to Samsung for production. 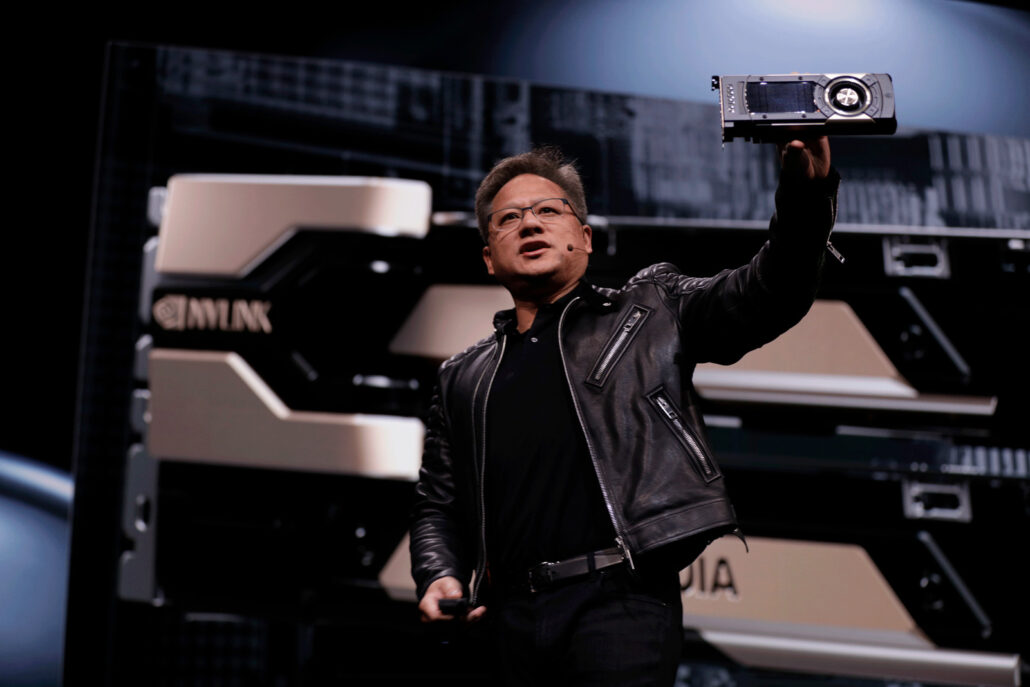 Finally, Jensen was asked about the launch timeframe of their next-generation 7nm GPU, but he simply replied that it wasn't a convenient time for them to disclose any date at the moment. We know from a recent interview with NVIDIA's CFO, Colette Kress, that they want to surprise everyone with their own 7nm GPU announcement, but they are waiting for the right time to do so.

AMD, on the other hand, is also expected to make an announcement of its Radeon Instinct Mi100 HPC accelerator based on the Arcturus GPU soon which is also reportedly packing 8192 SPs and is based on the latest 7nm GPU architecture. However, as NVIDIA has proved in the past, that they can optimize their architecture to the point where it's super-efficient and competitive against GPUs from its competitors that are based on more advanced nodes (16nm vs 12nm & 12nm vs 7nm).

Given that NVIDIA would be on process parity with AMD with its next-generation GPU and with a brand new architecture too, we can see some real disruptive performance. These are definitely some huge specifications for NVIDIA's next-generation GPUs and we can definitely expect a full-blown announcement by NVIDIA at its GTC 2020 online keynote on 22nd of March.