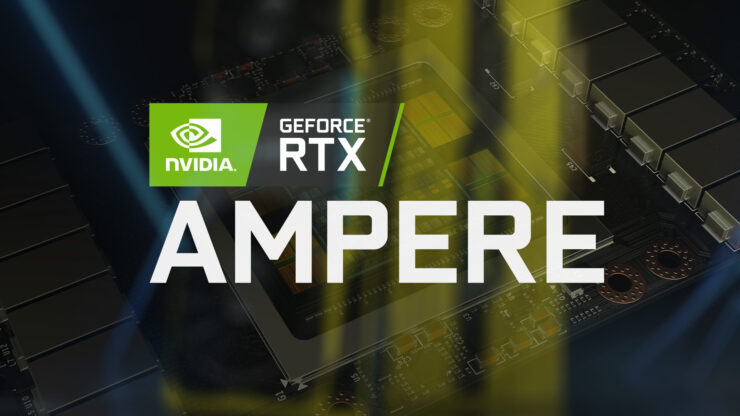 Woah, a major leak of NVIDIA's upcoming next-generation graphics cards (most probably called Ampere) has just sprung from Geekbench (via _RoGame@Twitter). Not one but two seperate GPUs have been benchmarked showcasing what are quite possibly two graphics cards in NVIDIA's upcoming lineup. Keep in mind however that these aren't necessarily Ampere (or Hopper), they could be called something else (it's really up to NVIDIA) and the company is known to change nomenclature at the last hour.

The first GPU is one with 7552 CUDA cores and 118 SMs. Interestingly, the performance and the Geekbench read would mean that the rumored 128 cores per SM theory is wrong and the GPUs do have the standard 64 cores per SM. This particular GPU was clocked at 1.11 GHz which would make this a 16.7 TFLOPs part at current speeds. Of course, if these leaks are legit (and I have a feeling they are) then this isn't the top tier part - which would have 8192 CUDA cores. This GPU has 24GB of memory (although we aren't sure if Geekbench is detecting this properly).

This particular NVIDIA GPU scores an astounding 184096 points on Geekbench - almost 40% more than the TITAN RTX. Keep in mind these are almost certainly not the final clocks of the graphics card - which would mean overclocking potential is waiting just around the corner. It is also likely that what we are looking at is the data center parts (as NVIDIA almost always launches those first) and not the gaming variants.

The second GPU is one with 6912 CUDA cores and 108 SMs. This lower-powered variant is clocked at 1.01 GHz and clocks in at roughly 13.9 TFLOPs (about the same level as a RTX 2080 Ti). Interestingly this card is being shown as having 47GB of memory, which makes this likely that we are seeing a misread of some sort as far as the memory specifications go. The 6912 CUDA core variant scores 141654 points on Geekbench - slightly higher than an RTX TITAN.

The specifications shown in the Geekbench details do check out so the chances of this being spoofed are quite low. Considering NVIDIA has been planning to launch a new series of cards for quite some time now, this leak is going to be met with some serious excitement. The clocks almost certainly indicate that we are looking at the 7nm node - any older mature node would yield much higher clock speeds.

What do you think of these new GPUs?

What we know so far

We have previously heard of NVIDIA's Ampere GPUs when they passed their EEC certification and it is highly likely that NVIDIA will continue with their RTX philosophy and take that to the next level with Ampere. Right now, the Turing GPU is capable of raytracing at 1080p 30 fps for light to moderate path ray tracing workloads. The Ampere GPU will be able to go further.

The fact that it is based on a 7nm process means we are looking at a performance advantage as well as a power efficiency advantage. At a bare minimum you are looking at a 50% increase all things considered and watt for watt.

The GPU industry has, as a result of NVIDIA's apathy, been fairly slow not only in terms of the usual perf per $ growth, but as a function of the absolute performance growth as well. With NVIDIA's competitive incentive broken (we have AMD to thank for that, unfortunately), the company also ran afoul in its usually stellar earnings records. In fact, while NVIDIA remains on the 16nm process, AMD became the process leader by moving on to TSMC's 7nm process. Here is what the analyst had to say:

“We think Nvidia faces the most reasonable Street expectations in quite some time, with potential tailwinds from improving DC [data center], Switch [Nintendo console], and high GPU [graphics processing unit] attach rates (laptops/desktops), all in front of a litany of upcoming 7nm [nanometer] launches over the next nine months,” he wrote. Source.

NVIDIA it seems has finally decided to play catch up and will be shifting to its own 7nm by 2020. According to what we have heard so far, this will be Samsung's 7nm EUV process and should offer a significant step up in performance from previous generations (even TSMC's non-EUV based 7nm process). 9 months amounts to roughly 3 quarters, and with a launch in 2020, you will first start to feel the impact in the third-quarter earnings (exactly a year from now). In other words, NVIDIA is slowly but surely working its way back up to getting Jensen his coveted record quarters.