Igor over at Igor's Lab has managed to confirm the GTX 1660 SUPER's clock rate as well as the memory standard it will be shipping with - allowing us to get a very good idea of how the theoretical performance of this upcoming NVIDIA GPU is going to stack up against the likes of the AMD RX 5500 XT. Since I don't really like leaving someone hanging, here's the overview: the NVIDIA GTX 1660 SUPER is going to beat the AMD Radeon RX 5500 XT but not a possible RX 5600 XT (this card is only rumored at this point).

NVIDIA GeForce GTX 1660 SUPER will be clocked at 1785 MHz and feature GDDR6, performance just under the AMD Radeon RX 5600 XT

The problem, as many of our readers would remember, is that NVIDIA's standard GTX 1660 variant supports only GDDR5. Considering AMD's Radeon RX 5500 is launching soon with GDDR6 and clocked at roughly 1.7GHz, this would mean NVIDIA's vanilla 1660 stands no chance against the RDNA powered competitor in red. The answer, it turns out, is to equip the card with GDDR6 memory as well. With memory clock rising to 14 Gbps from a mere 8 Gbps and a boost clock that is much higher than the succeeding GTX 1660 TI, the GTX 1660 SUPER offers 94 to 96% of the performance at a much lower price point.

This also means that the sales of the Ti are going to get cannibalized since the performance per dollar value of this card is going to be superior to the vanilla Ti. Using the core count, clock rate and memory Igor calculated the expected performance of not only the NVIDIA GTX 1660 SUPER but the AMD RX 5500 XT as well. He also included a possible RX 5600 XT. Why? Well, the difference between the RX 5700 XT and RX 5500 XT is huge, which means AMD will probably roll out a card to fill this gap in the near future (this is how yield theory works after all). 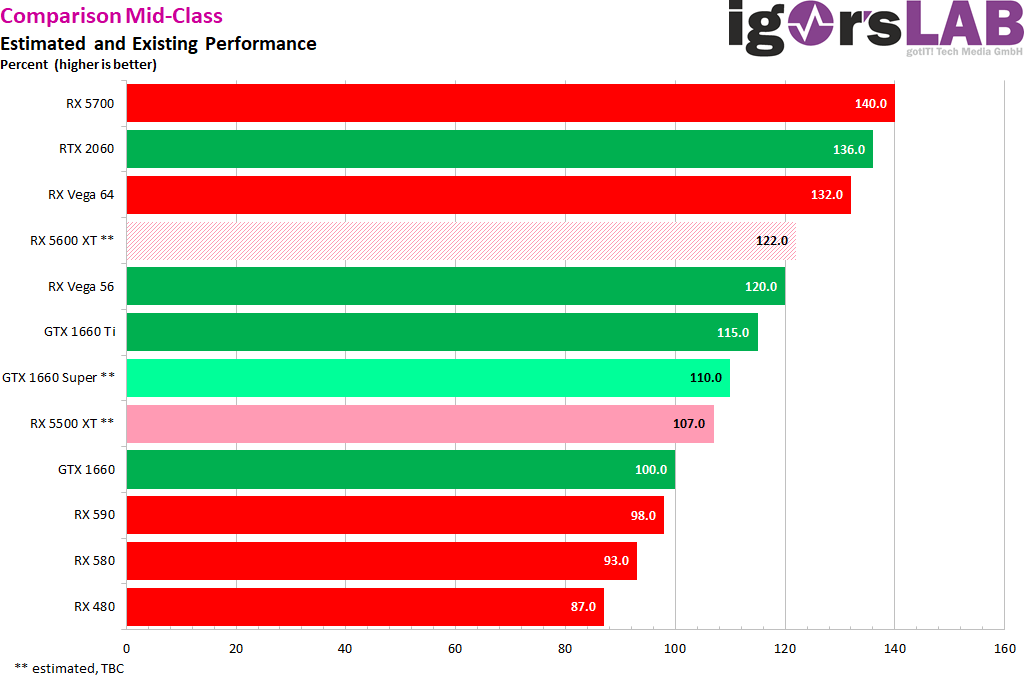 It is worth noting that Igor has confirmed the existence of the GTX 1660 SUPER - so this card no longer has rumored status in our books. According to Videocardz, the GTX 1660 SUPER is going to be launching near the end of the month on October 29, with availability next month. Things are starting to get heated in the mainstream segment where the majority of GPUs are shipped and gamers are soon going to be able to purchase more fps for the same dollars.