November Security Patch Rolling Out to Pixels; Brings Forth Camera Improvements for the Pixel 4

Its that time of the month again when Google releases its monthly security patch for Android. The November Security Patch is now rolling out for all Pixel devices, except for two. Unfortunately, this is the end of the road for the original Pixel and Pixel XL. Google promised two years of guaranteed Android version updates, and three years of guaranteed security updates in the form of monthly patches. Ideally, it shouldn't have received the Android 10 update, but it did anyway due to popular demand.

There are 17 issues resolved in the November Security Patch dated 2019-11-01 and 21 for 2019-11-05. Vulnerabilities range from high to critical, with the most severe relating to the media framework and a remote attacker possibly executing arbitrary code through a crafted file. Google notes that no devices were affected y said vulnerability. Additionally, there was an 84% more devices received the patch during Q4 2018 compared to last year. 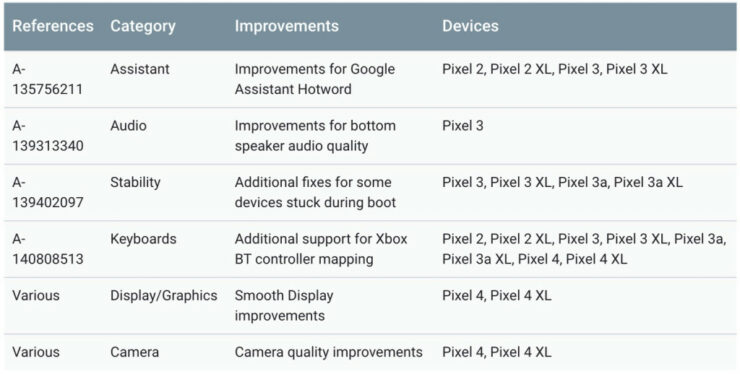 The November Security Patch also brings has some Pixel-specific improvements. There are six “Functional patches” in total. “Smooth Display improvements” are exclusive to the Pixel 4 and Pixel 4 XL, and likely allow the 90Hz Smooth Display to work in more brightness settings. Google announced earlier that it was planning to let 90Hz work under more brightness conditions.

Additionally, the November Security Patch also brings forth some"Camera quality improvements” for the new devices, while there is now “additional support for Xbox BT controller mapping.” The latter addition also applies to older Pixels. Lastly, there are also some “Improvements for Google Assistant Hotword” on the Google Pixel 2 and Pixel 3. The Pixel 3 gets “Improvements for bottom speaker audio quality” too. Lastly, the Pixel 3 and Pixel 3a gets “additional fixes for some devices stuck during boot.”

The update should be available over the air in the coming days. In the meanwhile, you can also use the links below to sideload the software corresponding to your device.