It has been quite a good time since Nokia's Android smartphone came into news. Codenamed "Normandy", we have today got some snaps of Nokia's first ever Android attempt. While Nokia is set to go to Microsoft, this recent Nokia Normandy leak confirms that Android project will keep going on.

The latest leaks have been posted by evleaks showing first images of its user interface. The leaks suggest that Nokia Normandy Android phone will use the very popular Lumia design and will be an entry-level Android phone. The Normandy is also rumored to be launched in a plenty of colors following the Asha and Lumia trends. 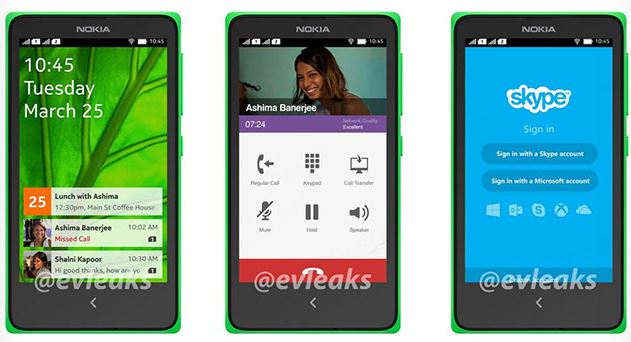 The credible and famous tipster @evleaks has posted the images of Nokia Normandy Android phone's custom user interface. Three images have been leaked showing the tweaked UI with Skype, Viber apps and lock screen. The UI's status bar suggests that Normandy will be a dual-SIM Android smartphone. Nokia Normandy user interface looks like a mix of Asha, Android and Windows phones.

According to rumors and leaks, Nokia Normandy will feature a 4 inch FWVGA display with 480 x 854 pixels. With a 5MP rear camera, Normandy will run on Android 4.4.1 KitKat with a Qualcomm Snapdragon processor.

If you are a Nokia and Lumia fan, don't be too hopeful though. Although the recent leaks sort of confirms the Normandy project, with Nokia going to Microsoft, we cannot really be sure about the specs, the project's status or even the Android project running at Nokia.

Read: PlayStation 4 Tips and Tricks – The Best of your Gaming Console