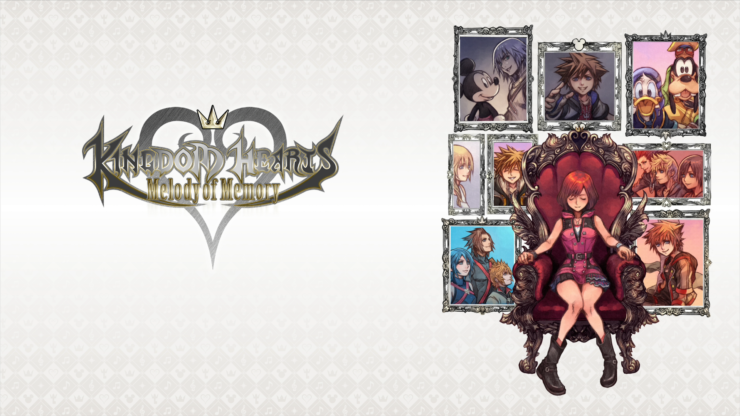 If there's one RPG series that I'm surprised to have a rhythm game spin-off, it certainly wouldn't be Kingdom Hearts. While the series has historically been filled with classic Disney set pieces, it's the original soundtrack that's stood the test of time. Any Kingdom Hearts fan could tell you of the fond memories they have when the opening scenes play and Dearly Beloved celebrates the title screen to each mainline game. To have a full rhythm game dedicated to the original songs in the Kingdom Hearts franchise has been a long time coming and we've had the pleasure of taking a recent look at the newest entry in the cross-generational JRPG series: Kingdom Hearts: Melody of Memory. 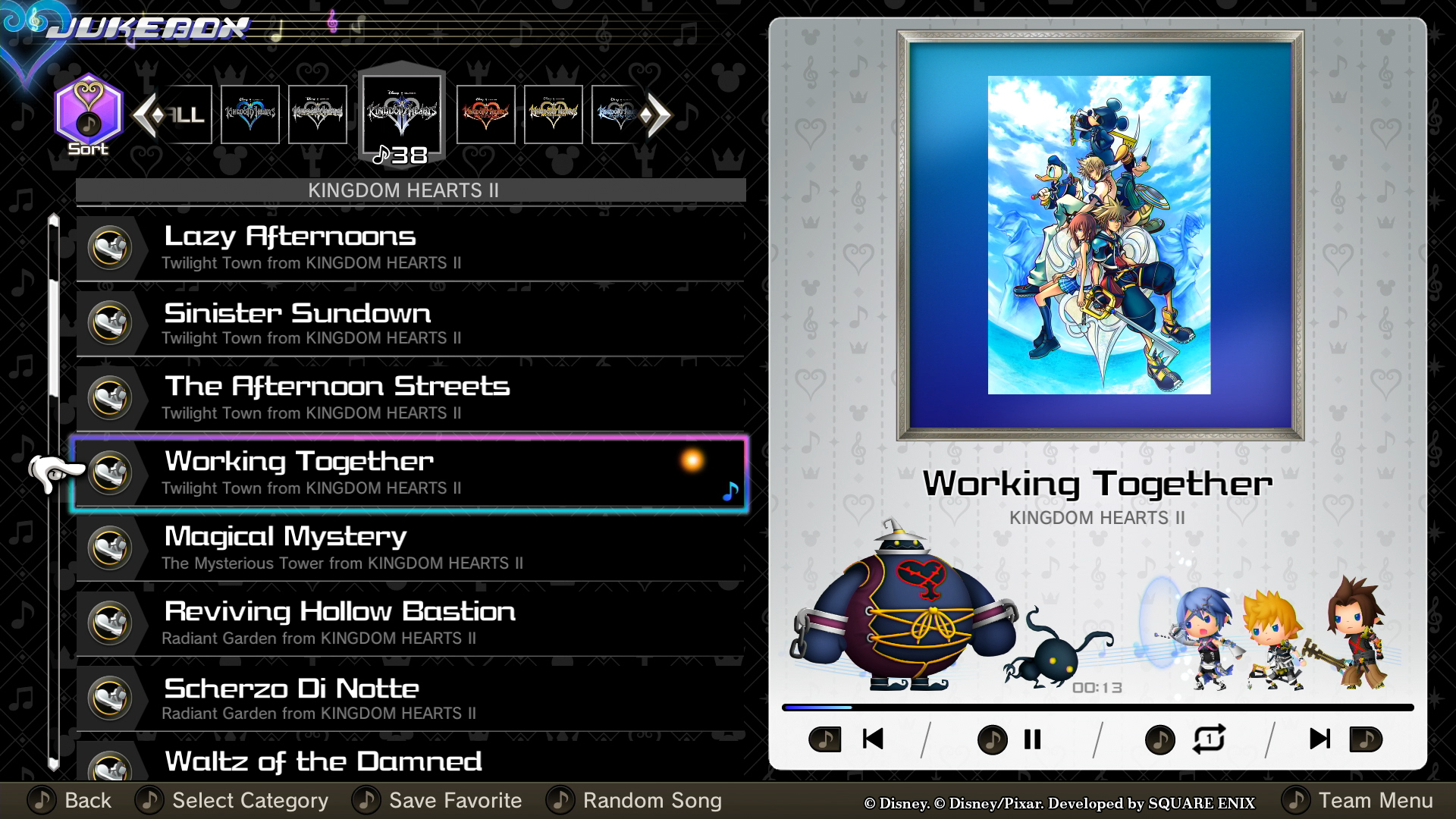 While there's surely going to be a multi-layered storyline that ties Melody of Memory to the greater Kingdom Hearts franchise as a whole, our preview only focused on six songs. That's a mere fraction of the 140+ tracks that Square-Enix has promised for the final setlist. Among the songs available are two from the original Kingdom Hearts (Welcome to Wonderland and Hand in Hand), one from Birth by Sleep (The Rustling Forest), and one from the 0.2 Birth by Sleep entry (Wave of Darkness I). There are two other tracks temporarily exclusive to the two-player cooperative mode in the Melody of Memory preview as well.

If you were to show me screenshots for Melody of Memory and tell me that it was a Theatrhythm game, I would believe you without a second word. Much of the UI and scoring formula are true to Square-Enix’s premiere rhythm game series. Even the little character models during loading transitions are designed in the same art style as the mainline Theatrhythm titles, Yuki Adachi. Despite the shift to running along a vertical track, Melody of Memory fits neatly into the pantheon of Theatrhythm titles and can be a nice refresher to a series that hasn’t seen an English release since Theatrhythm Final Fantasy Curtain Call on the 3DS. 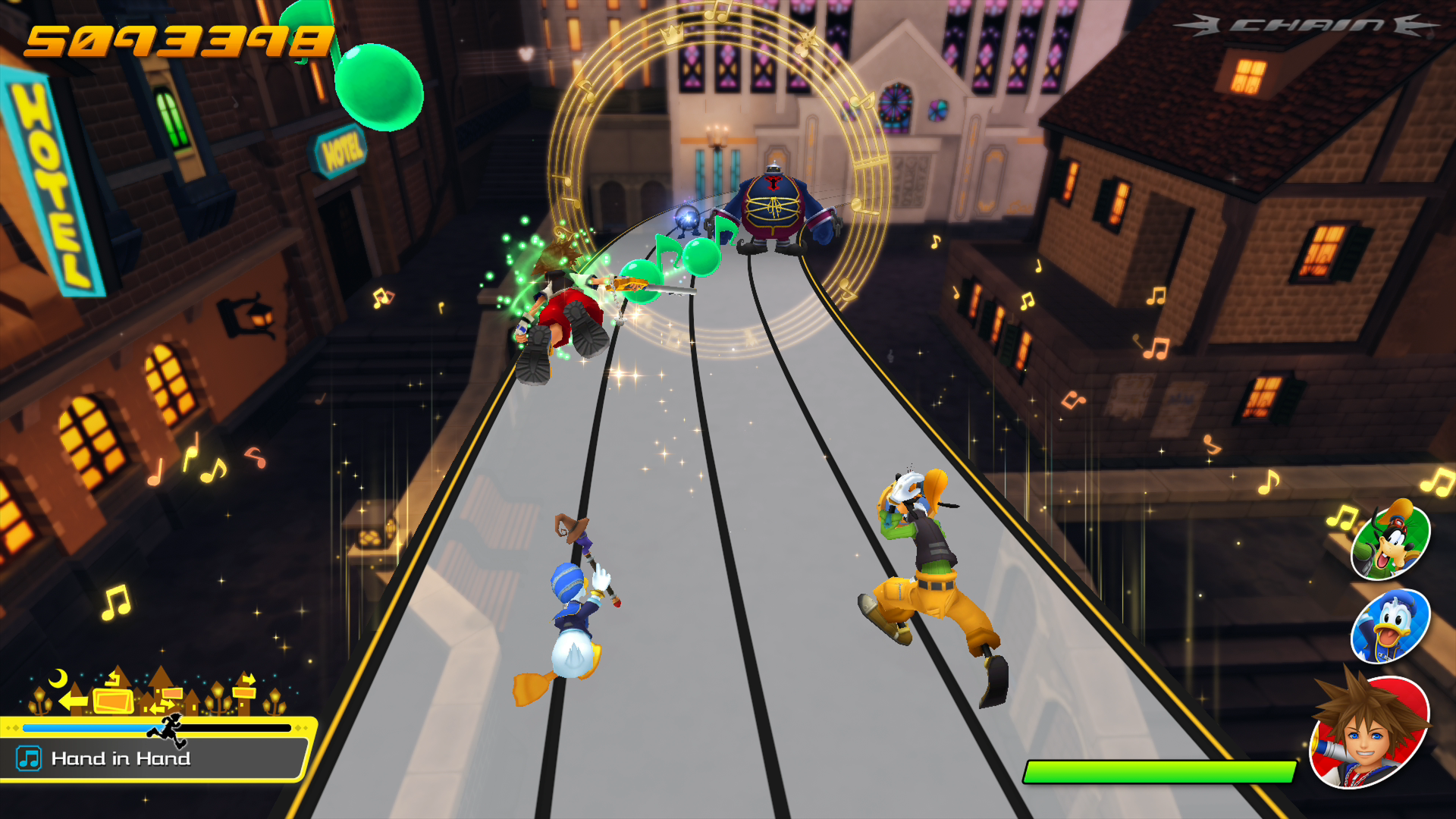 In the introductory tutorial, Kingdom Hearts: Melody of Memory promises to have multiple styles stages, just as the Theatrhythm series does. However, in my brief hands-on preview, I was unable to catch a glimpse of what Field Battles might play like. Instead, all of the songs available to play were various battle and world themes from the long-running pantheon of Kingdom Hearts titles, with a little bit of everything from the mainline PS2 entries to the numerous handheld spinoffs.

For each stage, you’ll gather a party of three to venture out on musical journeys together. Typically, this appears to be just Sora and two guest characters but I wouldn’t be surprised to see anyone else that’s been playable in some form from the franchise as a party addition. The two-player mode lets the second player pick up a controller as Riku and there is already discussion about ‘Team Classic’ (Sora, Donald and Goofy) as well as ‘Team Days’ (Roxas, Axel and Xion). 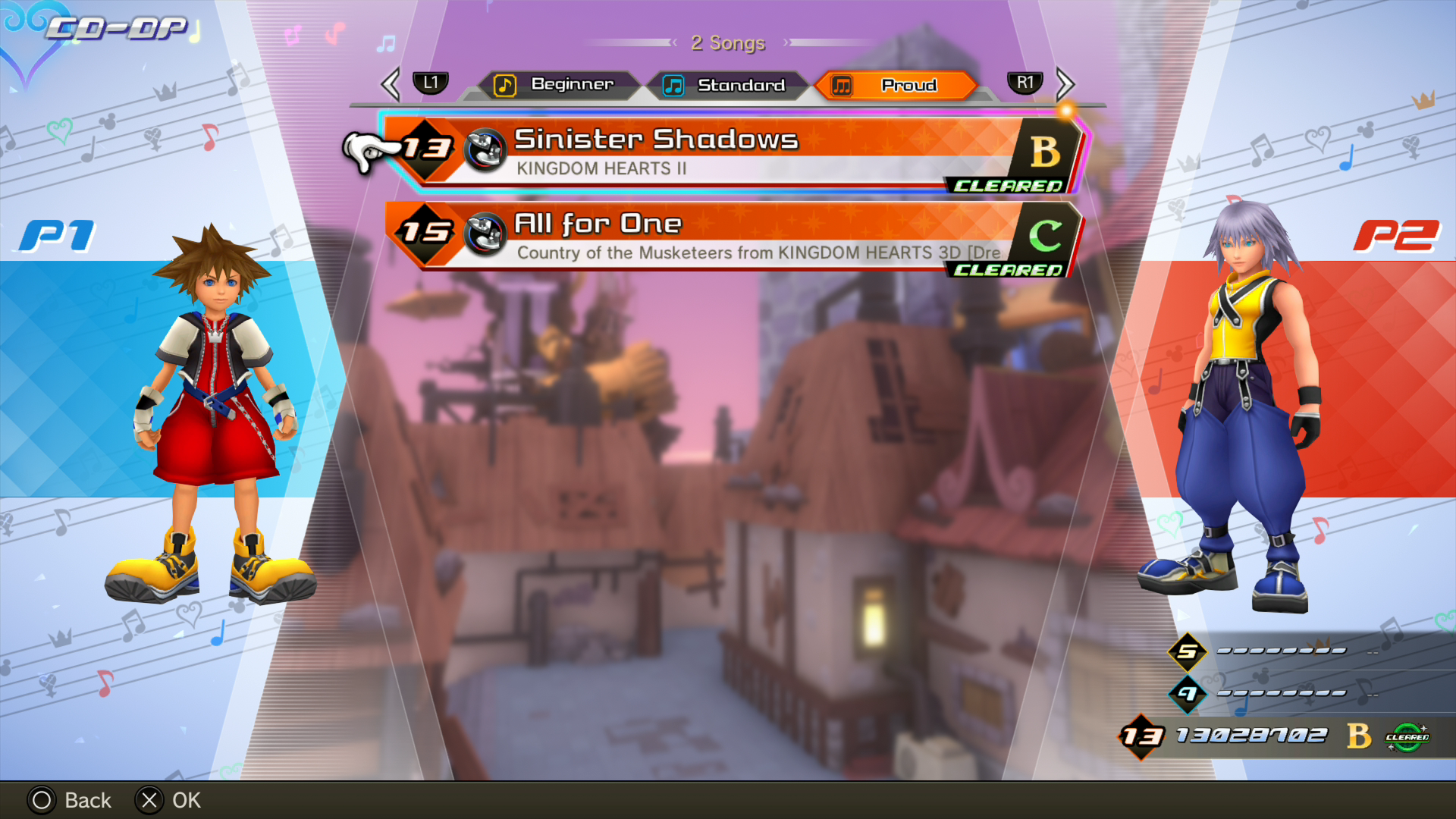 Rather than any standard notes falling down the note track, Sora and crew will attack enemy heartless as they move rhythmically towards the party. Players will have to juggle inputs on the X button as well as the L1/R1 shoulder buttons for nearly every note. As enemies run down towards the party, players will have to hit any of the three attack buttons for a timely hit. Thankfully it doesn't matter which button you press, however, if two or three notes come at you at once, you'll need to press a similar amount of buttons at once.

Once you have the basic attacking down, there are a pair of other commands to worry about. With specific enemies having a tendency to stay out of reach, Sora will have to jump and glide to reach some of them, with a simple press of the circle button. There will be a visual indication of when to jump, being treated just as any other regular input. The last style of note in the demo were magical attacks from giant diamond-shaped crystals that appear on the note highway and require the triangle button to activate.

Visually, there's going to be a lot happening on screen to keep track of if you're merely following the action. As Melody of Memory is a rhythm game despite its appearances, it pays to have a keen ear and follow the memory along in your head. You'll succeed far more often if you follow the flow of music and tap along, rather than trying to follow the enemies marching down at the player. On Proud Mode, there can be too much to contend with, especially once you start getting into the double-digit difficulty tracks. Trying to know when to split a stream of oncoming enemy notes with a rest or discerning when two closely linked enemies might require a simultaneous input is just going to be something that you pick up with experience.

If trying to manage all of these inputs without dropping the combo or taking too much damage sounds like a lot, Kingdom Hearts: Melody of Memory does offer a simpler 'One Button' mode that takes the guesswork of remembering which buttons to push as you play. Harder tracks like Wave of Darkness I will still require a good sense of rhythm on Proud Mode but this is a worthy compromise to allow players to still feel successful as they're running and grooving to each track.

As this preview arrives, it will be less than one month until the global release of Kingdom Hearts: Melody of Memory. The upcoming rhythm spinoff from the Kingdom Hearts series will be available in North America on November 13th across PlayStation 4, Xbox One, and Nintendo Switch.