Nintendo has possibly been pitching their upcoming console, the Nintendo NX, to developers at the Russian game conference, DevGAMM.

During the conference, Nintendo's business development manager, Ed Valiente, held a presentation about self-publishing on the Nintendo e-shop.

Ed Valiente will talk about high level business policies and walk you through the process of releasing games on Nintendo eShop on the Wii U console and Nintendo 3DS portable system step-by-step from applying to be a developer through to certification, marketing and PR support opportunity and post-launch support.

According to Wargaming’s production vision expert, Svyatoslav Torick, who seemingly attended the presentation, a Nintendo NX development kit is only being issued to those who have either a strongbox or a secure room. Although this is quite standard practice in for hardware that is still confidential, it does imply that Nintendo NX devkits are close to being dispatched or already being dispatched as we speak. 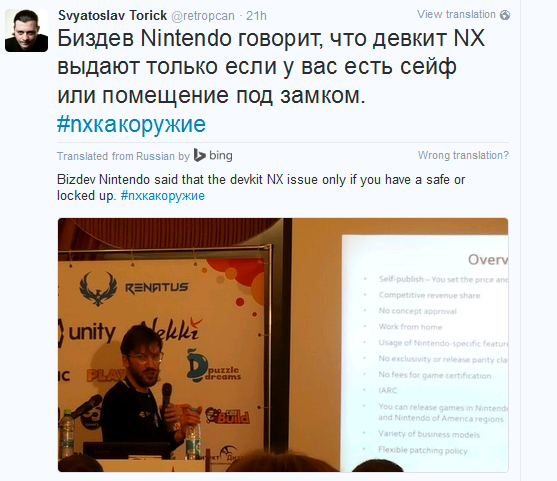 Nintendo hasn’t revealed any details on their upcoming console, although the company’s recent earnings report revealed that the Nintendo NX will be released in March 2017, and will be based on a brand-new concept.

Thanks to Neogaf user DownGrader for spotting this.