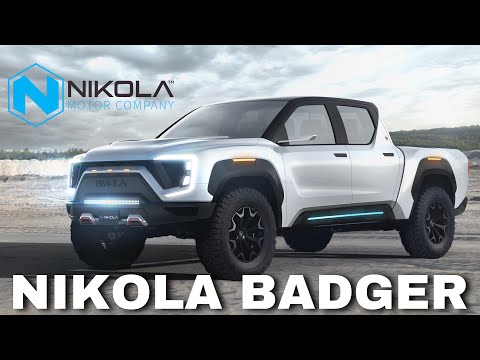 Nikola Corporation (NASDAQ:NKLA) rode a wave of investor euphoria in June as it was able to successfully peddle its ethereal business plans to retail investors. However, the stock’s recent performance has been nothing short of a disaster as reality seems to be catching up with fantasy.

As an illustration of the carnage, since the 01st of July, Nikola shares have tumbled by a whopping 40 percent, closing at $40.23 on Tuesday. In fact, it was the 17 percent plunge yesterday that prompted Trevor Milton, the Executive Chairman of Nikola Corporation, to jump into the fray with a commentary on the day’s price action. In a now-deleted tweet, Mr. Milton claimed: 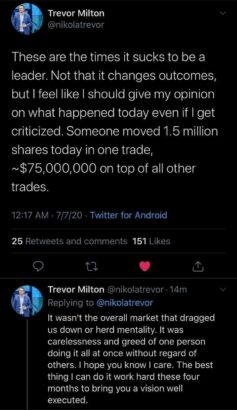 Before delving into the details, let’s examine what the terms SPAC and PIPE mean. A Special Purpose Acquisition Company (SPAC) is formed for the sole purpose of raising capital through an IPO and then to channel these IPO proceeds into acquiring an existing company. If the SPAC fails to acquire its target within the stipulated timeframe, the money is returned to the investors and the entity is disbanded. In early June, Nikola Motors officially became a wholly-owned subsidiary of VectoIQ (VTIQ), a SPAC. As a result of this acquisition, Nikola debuted on the NASDAQ under a new symbol – NKLA. A Private Investment in Public Equity (PIPE), on the other hand, is the purchase of shares of publicly traded stock at a discount to the current market price by institutional investors. Nikola deployed this PIPE facility to acquire an infusion of $700 million in fresh liquidity from investors, including Fidelity Investments, P. Schoenfeld Asset Management, etc. In return, these investors received Nikola shares at a discount, generally earmarked at around $10.

In an S-1 filing with the U.S. Securities and Exchange Commission (SEC) on the 15th of June, Nikola disclosed:

Nikola also stated that a further 53.39 million common shares along with 890,000 warrants may be sold by “selling security holders”. However, the company will not receive any proceeds from the sale of these securities.

We noted in our previous post that outstanding SPAC warrants to purchase an aggregate of 23,890,000 shares became exercisable on the 3rd of July 2020. However, as the 3rd of July was a public holiday in the United States, the effective date from which these warrants could be exercised was the 6th of July and the window remains valid for five years. In a crucial caveat, we highlighted that the SEC needs to approve any liquidation related to these warrants.

This brings us to the crux of the matter. Nikola shares have plunged over 31 percent since Monday’s opening price of $58.90. We contend that the uncertainty surrounding when these warrants will be exercised is exacting a huge psychological toll. It is an axiom that markets hate uncertainty. Consequently, we recommend that Nikola should take advantage of a stipulation in its S-1 filing that allows for an early exercise of warrants should the stock price trade above $18 for 20 out of 30 trading days. Nikola shares fulfilled this requirement toward the end of June. Now, in order to force an early exercise, Nikola would simply have to give a 30-day advance notice.

Bear in mind that these warrants will be exercised sooner or later. Consequently, it would perhaps be a more sensible move for Nikola to opt for an early exercise, take the short-term blow, and then work toward achieving its stated goals. This path should theoretically offer a much smaller window for shareholders to suffer as opposed to one where protracted uncertainty and pain have to be endured before these warrants are exercised.

The writer does not hold any long or short position in Nikola shares.