A few weeks ago I wrote about the mysterious piece of space junk called ‘WT1190F’ which would enter the Earth’s atmosphere. The piece of space junk did enter the Earth’s atmosphere and disintegrated as I mentioned it would. Some confirmed footage of the event was captured by a team of scientists working with SETI, The United Arab Emirates Space Agency, the InterActiveCorp (IAC) and other various institutions.

The footage shows the space junk as a bright streak of light, something a shooting star would emit. To get the footage the team had to get close to the space junk at the exact time it reentered the atmosphere so what they did was they hopped onto a plane and recorded this spectacular event while maintaining a safe distance away from WT1190F.

Take a closer look and you'll see the bright streak of fast-moving light!

The object entered the Earth’s atmosphere and as predicted it went over a patch of the Indian Ocean near the Sri Lankan coast, people living on the southern end of the country would have been able to spot the space junk. Some pictures were available online on Twitter termed as WT1190F reentry and the pictures show the streak of light similar to the one in the footage. 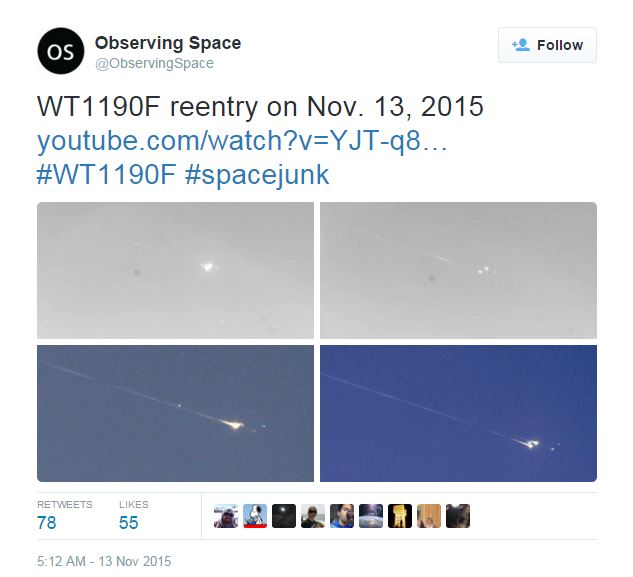 Nobody is really sure what the piece of space junk is and it is impossible to be sure but the European Space Agency has suspected that it could be a piece of fuel tank from an old rocket that went to space and discarded the fuel  tank on the way. This can’t be verified though because of the disintegration of the junk by the atmosphere.

Scientists are still really happy because this is a major breakthrough for them as the predictions they made were almost to pinpoint accuracy and this can be really important in future events in case a large asteroid is heading for the Earth. Although this space junk wasn’t of much threat others can be,

"Its mass is not sufficient to cause any risk to the area, but the show will still be spectacular, since for a few seconds the object will become quite bright in the mid-day sky," European Space Agency said in a statement.

As for the case of this space junk a map from BPEarthWatch.com predicted where the object would fall upon its reentry into the Earth’s atmosphere and this prediction has been quite accurate. The prediction is shown below.

You can check out the full footage over here. We will keep you informed in case new things similar to this come up till then do let us know how you feel about this accurate prediction in the comments below.