After the predicted asteroid flyby on Halloween there have been predictions by scientists that a piece of space junk will impact the Earth at 2:20 EST on 13th November this year.

The small piece of space junk will be falling into the Indian Ocean if the predictions are correct and it will be about 65kms off the southern end of Sri Lanka. The space junk is called WT1190F and is basically a small temporary satellite; it was first discovered in February 18, 2013 and was lost afterwards, now it has been rediscovered just this month.

The temporary satellite is just space debris and measures roughly between 1-3 meters long, it has provided an opportunity for scientists to witness what an impact of space debris would do from the beginning till the end.

The space junk was detected by the Catalina Sky Survey - an astronomical survey based at the University of Arizona which focuses on the discovery and study of Near Earth Asteroids and Comets along with other stuff. The orbit followed by this space junk is a highly elliptical one, with it swinging out twice as far as the Earth to Moon distance and its movements also suggest that it might be hollow on the inside this is also visible because of its very low density at 0.1g/cm^3. 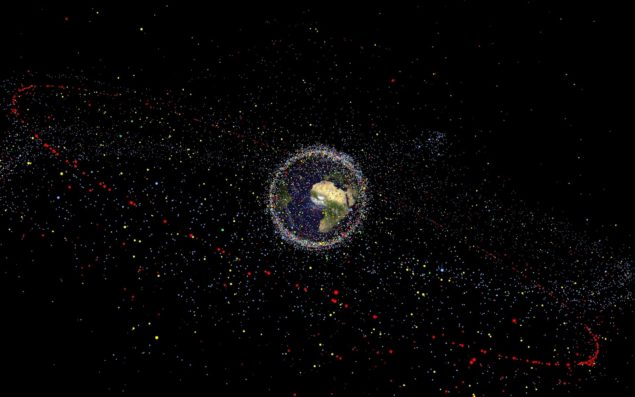 So this can’t be a normal piece of space junk so then what is it? Traci Watson at Nature News shares her insight,

"It could be a spent rocket stage or paneling shed by a recent Moon mission,"says Watson. "It is also possible that the debris dates back decades, perhaps even to the Apollo era. An object seen orbiting the Earth in 2002 was eventually determined to be a discarded segment of the Saturn V rocket that launched the first men to land on the Moon."

This will the first known instance of a human made object returning back home and even though it might not get a lot of attention because of the fact that most of it, if not all, will be burned up when it will enter the Earth’s atmosphere and whatever small piece of the junk will be left will plummet into the Indian Ocean. So this might not be the best attention grabber for people who would like to see some kind of destruction due to collision with outer space objects (yes there are quite a few people who want to see stuff like that!) it will still give scientists a vague idea of what would happen in case something of that sort happens in the future.

So with that settled the WT1190F might not be very threatening, you would not want to be under its radar when it falls. This isn’t the only close encounter coming in the next few weeks as I wrote earlier about the asteroid 2015 TB145 closing in and which is going to be closest to the Earth this Halloween, so be on the lookout and be safe. We will keep you updated if anything changes, do let us know what are your feelings in the comments below.