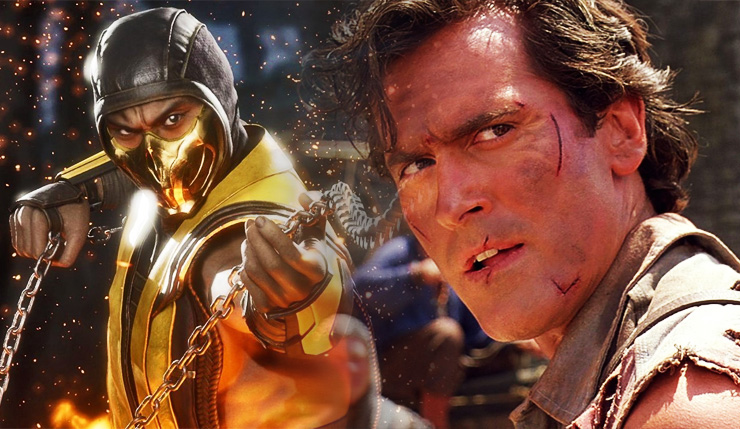 It seems the Evil Dead franchise’s put-upon hero Ash Williams may be strapping on the ol’ chainsaw arm and boomstick yet again for Mortal Kombat 11. This hasn’t been announced officially, but Twitter user Taco noticed something rather strange in an email promotion for MK11’s latest DLC character, Spawn.

Click on the image and scroll down to the legalese at the bottom. Yup, that appears to be a copyright notice for Ash from Army of Darkness. The wording of the copyright notice is a little weird, but then, it wasn’t supposed to be there in the first place -- I’m guessing it was accidentally copy-and-pasted into the email without proper formatting. Whoops!

Now, obviously, take this with a grain of salt, but this isn’t our first clue that Ash will be joining the fight. Back in 2019 fans datamined the Switch version of Mortal Kombat 11 and found several potential DLC Kombatants, including Ash Williams and all the characters who ended up being in the first Kombat Pack. These names were eventually scrubbed from the code, but, interestingly, files related to Ash, Fujin, Sheeva, and a mysterious character abbreviated "ROB" popped back up in Mortal Kombat 11’s latest update.

Mortal Kombat 11 just rounded out its current Kombat Pack with its sixth and final character, Spawn. NetherRealm Studios hasn’t said anything official about a second Kombat Pack, but it’s pretty much a lock it’s happening (Mortal Kombat X also included two Kombat Packs). You can check out a gameplay trailer for Spawn, below.

Mortal Kombat 11 is available now on PC, Xbox One, PS4, and Switch. What do you think? Excited to shed some groovy gore with Ash?