With the launch of Windows 10, and being an official feature of Apple's launch event earlier this month, Microsoft looks like a company that's changing its direction. Dividing its array of services into manageable segments, Microsoft's ventures in different areas have seen multiple levels of success. While the acquisition of Nokia and the Windows phone has not worked out that well for it, its other hardware ventures such as the Surface Pro lineup have got many users excited. The Microsoft Surface Pro 4 in fact has become a highly anticipated upgrade from Redmond and today the company has unveiled the launch date for its tablet/notebook hybrid, among a few other things. 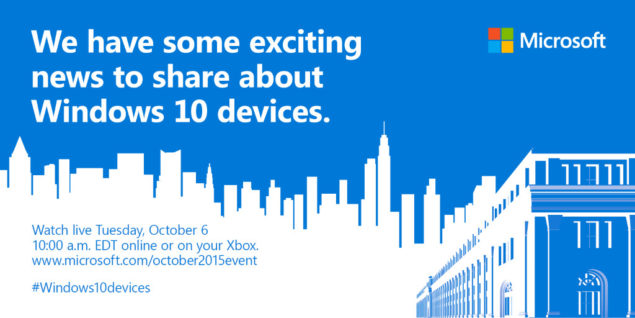 Microsoft's Next Windows Event To Take Place On October 6th

When it comes to the Microsoft Surface Pro 4, leaks and speculations about the hybrid upgrade from the company have been fairly sparse so far. We do know that it'll be coming with Intel Skylake on board, which is the reason Microsoft's delayed its launch to October, but aside from that, there are only a couple of things that you should know. These include rumors that while the Surface Pro 4 will remain similar to its predecessor in terms of design and accessory support, Microsoft just might be launching two different screen variants for the device.

In addition to the 12 and 14 inch variants of the hybrid, the Surface Pro 4 is also expected to feature USB Type-C support and a massive 16GB of RAM for the high performing variant. That, coupled with 1TB of storage options and Intel's Core-i7 Skylake processors should help serve enterprise and heavy users' demands quite well.

So with such extreme specifications rumored for the device, the next Surface Pro offering from Microsoft has a lot of eyes on it indeed. The company managed to do surprisingly well with the Surface Pro 3, with revenues being high for the device. Looks like Microsoft's unique hybrid formula has managed to serve the interests of quite a lot of consumers, as it provides an excellent alternative for low powered notebooks and reasonably powered yet portable tablets.

All eyes now on October 6th, when in addition to the Surface Pro 4, Microsoft's also expected to launch a couple of other devices including the Lumia 950 flagship duo. It'll also be an important time for Windows 10 mobile and the operating system in general. So stay tuned and let us know what you think in the comments section below. We'll keep you updated as this develops.