Microsoft seems to be quite determined to get new perspective for its Lumia brand. A new device Lumia 940 is leaked today showing some high-end specs including a Quad HD display. Here are the details: 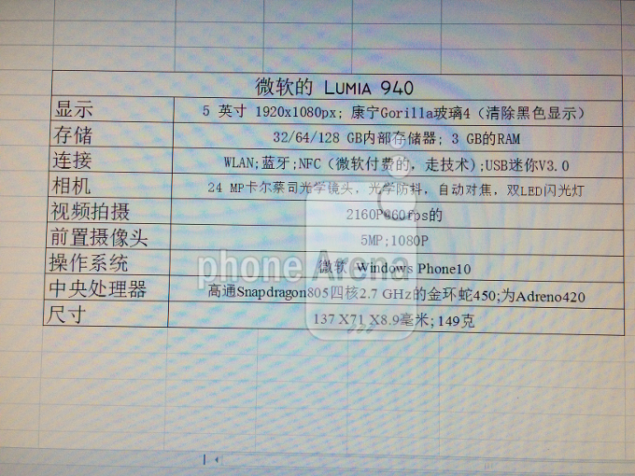 Lumia 940 camera will be a 24-megapixel front shooter with 4K video recording capabilities at 60 fps. Front camera is a 5 megapixel sensor with 1080p recording capability. The 2.7 GHz quad core Snapdragon 805 processor with its 3GB of RAM will definitely put the smartphone among the rest of high end competition. More details include device's dimensions and weight mentioned as 137 x 71 x 8.9 mm and 149 grams, respectively.

Lumia 940 seems to be quite a compact device with its new edition of PureView camera. Take this rumor concoction with a load of salt though as the whole thing seems rather made-up. While including high-end specs cannot be taken as something utterly impossible from Microsoft, there are some errors here and there that indicate it being a forgery. The inclusion of a Gorilla sheet that is not yet talked about Corning itself and then mention of "Windows Phone 10" raises some questions to this shot being an official leak. In any case, the device looks quite promising, if anything about it is true.

What do you think of Microsoft's attempts at reproducing its Lumia line up?