Earlier in the month, MediaTek had announced that it’s upcoming Helio X20 SoC would be able to take on Samsung’s Exynos 7420 and Qualcomm’s Snapdragon 820 thanks to its 10-core processor that would project a score of 70,000+ points in AnTuTu’s benchmarking application. Currently, only NVIDIA’s Tegra X1 has been able to break that 70,000 point barrier. Now, the latest leak coming from Digitimes reveals that MediaTek has tapped TSMC and its 20 nm node to be the fabrication at which the 10-core processor is going to be manufactured on. The news might not be as exciting on chips being processed on the 14 nm FinFET architecture, but having 20 nm chips does have some advantages. 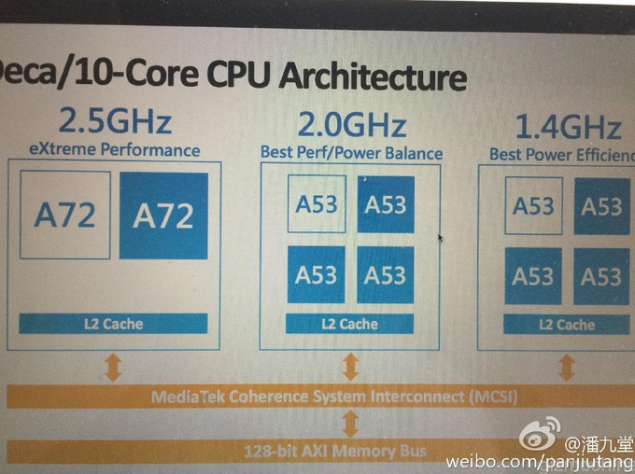 Smartphones and tablets boasting the company’s formidable 10-core processor might be released during the start of 2016 since mass volume production will commence in Q3, 2015. While majority of readers will feel that MediaTek has taken a step back by using an inferior architecture to roll out its 10-core SoC, fact of the matter is that the company is making a smart play. Fabricating processors on the 20 nm process will cost far less compared to the superior 14 nm FinFET process. These cost reductions will immediately take notice of other smartphone companies besides Xiaomi and Vivo, who have already formed partnerships with MediaTek.

The upcoming chipset was codenamed Helio X20, and will utilize a 2 + 4 + 4 design. The design will deliver up to 40 percent more performance compared to octa-core processors. While performance will be the processor’s most valued ally, we can all understand the multiplication of criticism of how additional cores will become the bane of battery life for a smartphone user. One key difference between the upcoming processor and the previous ones is that this will take advantage of ARM’s Cortex-A72, which will end up being paired with Cortex-A53 in ARM’s big.LITTLE architecture.

Cortex-A57 was earlier highlighted of consuming 256 percent more power compared to Cortex-A53, making it unsuitable when battery life is given preference over performance. Is it any wonder why Qualcomm has been getting so much heat (NO PUN INTENDED) for its Snapdragon 810’s overheating issues? When MediaTek officially rolls out its deca-core processor, you can rest assured that it will be squaring off in skirmishes against Samsung’s custom core named Exynos M1 and Snapdragon 820.

The company has not given word on when consumers can immerse themselves in 10-core processing goodness, but we are certain that as 2015 draws nearer to its end, we will be able to witness several demonstrations on what exactly mobile powerhouse computing is all about.