With things moving at a surprisingly fast pace in the mobile chipset world, ARM had recently revealed that the company had the Cortex A72 under development, which would offer several new advancements over its current Cortex A57 top dog. One of these would be the ability to record 4K video at slo-mo, ensuring that you don't end up missing any detail at all. Well, the company's laid out comprehensive details about the A72 today, and gone as far as to compare it to Intel's Core M, a processor that's recently been making quite a lot of rounds.

ARM's latest Cortex A72, as expected before will be manufactured on the 16 nm node. The processor core has several advancements on board, which include a 75% increase in efficiency over its Cortex A15, launched by the company nearly 4 years back. But while earlier products from the company have focused mainly on smartphones and mobile devices, looks like ARM's moving more towards low power demanding ultrabooks as well. Apart from detailing the Cortex A72's specifications today, the company has also stacked its latest against Intel's Core M. 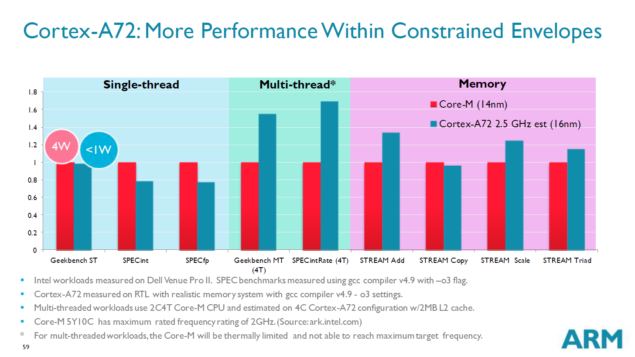 As can be seen above, so confident is ARM in its Cortex A72's abilities, that its gone straight ahead and compared it to Intel's Braodwell. While Broadwell really is no match when it comes to complete power packed performance, restrict both thermal envelope and power, and you'll see the chip make some gains. These can be seen above, with the Cortex A72 going head to head against Core M. There's also been word about it being used in more than mobile devices, so we'll have to wait until the A72 becomes available, which is next year, in 2016. 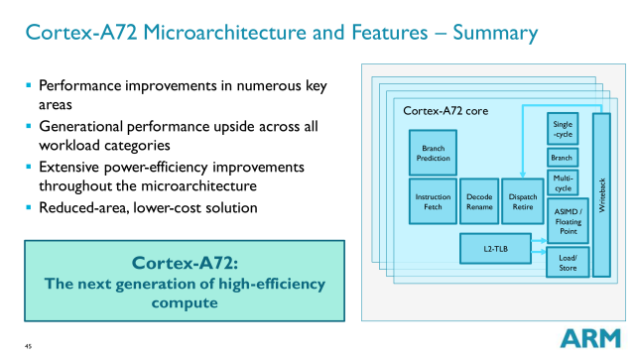 Architecture wise, the Cortex A72 features a complete redefinition of ARM's earlier A57. The company's completely overhauled its previous design blueprints, and the A72 comes with every single logical block having been rearranged to reduce power loss and therefore increase overall efficiency and further reduce temperatures. The result of this is a smaller area, which coupled with reduced power consumption,courtesy of the 16 nm FinFet, allows the Cortex A72 to hit 10% higher frequencies when compared to the A57. Performance per watt also improves up to 30% on the Cortex A72.

The Cortex A72's significant design overhaul includes a reworked 3 way L1 Cache, coupled with a shared L2 Cache. This also includes some huge latency gains including a 6 cycle FMAC. The Cortex A72 will also be available on the 28 nm node and can be expected to feature in Qualcomm's Snapdragon 618 and 620 and MediaTek's MT8173. What remains to be seen now is how Qualcomm, Samsung and the rest of the pack respond to ARM's advancements. Qualcomm's working on its own Kryo cores for the Snapdragon 820, so things should heat up by the end of this year.

But whatever the case may be, ARM seems to be pretty confident about its latest processor achievements. In its presentation today, the company also compared the Cortex A72 to Intel's Xeon E5 2650 and 2660 E3, claiming nearly similar performance for one third of the TDP. It should be kept in mind that Intel's processors also factor in IO while the Cortex A72 excludes it.

Sounds like a blast. The Cortex A72 is finally  here and ARM seems to be serious with its intent to maintain its place in the mobile world. How manufacturers choose to incorporate its designs into their own units, and how does the company's future pan out with Apple, which is also been rumored to be looking to replace long time partner Intel for its processors on the MacBook remains to be seen. We'll let you know as things develop further, but by the looks of them so far, ARM's got them under control. Let us know what you think in the comments section.