Apple launched the latest redesign of its popular MacBook Air series a couple of days back. The latest MacBook air comes with a 12 inch screen size, with Apple's signature Retina Display amongst other design changes on board. These include a redesigned keyboard, which according to Apple given more surface area per key and reduced thickness made possible by a host of factors including a first time fanless design for a MacBook. But that isn't the only place where the buck stops. Apple seems to have paid great thought into the MacBook's design, with the notebook's motherboard being smaller than a well known microcomputer. 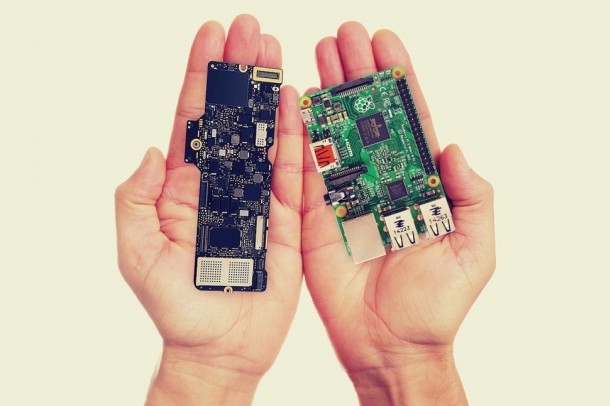 The folks over at DigiTrends have been eager since the MacBook's launch have been super excited about every feature on the device it would seem like. And in their quest for answers, they've managed to discover another interesting fact about Apple's latest. The logicboard for the MacBook Air is smaller than the well known Rasberry Pi, which is a microcomputer that can be purchased by anyone who has a couple of spare bucks at hand.

By performing some math at the pictures of the motherboard, they've managed to cook up some measurements for the logic board on the notebook. According to the calculations, the MacBook's logic board measures 4.6 by 1.5 inches. This equals a total surface area of about seven inches. Taking a look at the Rasberry Pi's dimensions, it measures 3.4 inches by 2.2 inches. The surface area for the Rasberry Pi measuers up to be 7.48 inches. Coming to their thickness, the Rasberry Pi measures around 20mm in thickness, which is an entire 7 mm thicker than the MacBook's 13.1 mm thickness.

So by looking at the dimensions, Apple seems to have paid quite a lot of attention to the design of its latest notebook. Interesting specifications to look at. Let us know what you think in the comments section below. Cheers.