We finally have a new point of reference to test the Mantle Vs DirectX performance difference apart from Battlefield 4 ( and to an extent Star Swarm). We just received these benchmarks, courtesy of our friends over at Computerbase.de and they are the result of a very thorough investigation into DirectX vs Mantle Performance difference.

The exact test rig was not mentioned though I am pretty sure it was a i7-4770K (downclocked, no HTT) since they mention they same in later tests. The GPUs and the API currently used are however given in the charts. Without any further ado here are the benchmarks: 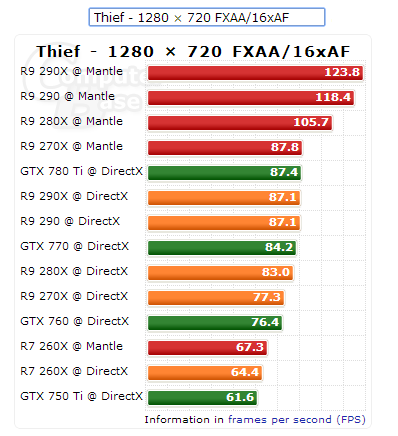 The first benchmark was conducted in the 720p (1280x720) resolution which, though unrealistic for today's standards, helps emphasize the importance of Mantle in CPU bound situations. To those who don't know, the higher the resolution the more GPU-Bound or GPU-Dependant the situation becomes. Similarly at lower resolutions games are almost entirely CPU Bound. The Nvidia Flagship GTX 780 Ti is a mind blowing 40 Frames behind the R9 290X. It is on par with the R7 270X with Mantle and R9 290X with DirectX. This benchmark is an absolute tribute to Mantle and shows just what a low level API can do.  The Game at this resolution is 100% CPU Limited. Want proof? Notice how both the R9 290X and GTX 780 Ti score exactly the same frames, which should not be the case in a real world scenario. Thats because in Direct3D, both GPUs ar being bottlenecked at approximately the same power level. 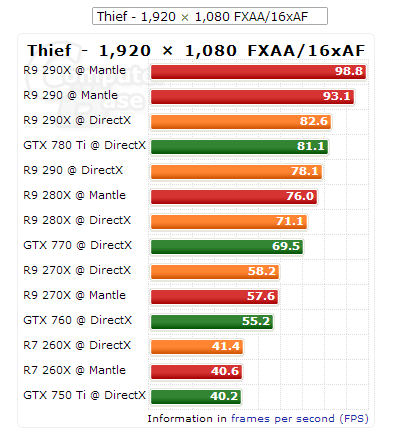 With 1080p we are entering the realm of the average mid-high end gamers of the world. While some gamers have even moved on to 4K the vast majority of the mid to high end spectrum games at 1080p. With the situation becoming increasingly GPU Bound we see the GTX 780 Ti start to pull closer to the R9 290X with Mantle. Here the GTX 780 Ti has exactly Halved its distance to the R9 290X with Mantle. 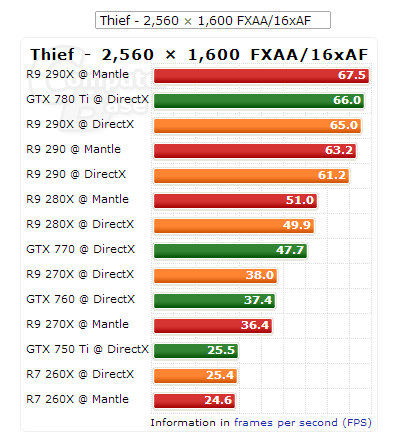 We finally enter the realm of almost fully GPU Bound situations and here Mantle's affect becomes almost non-existent. Here Mantle API yields a net bonus of 2.5 over Direct X which results it holding its lead over the GTX 780 Ti with a margin of 1.5 Frames. These benchmarks are nothing less than amazing. However even though it shows the power of Mantle, if Microsoft and OpenGL's GDC/GTC slides are to be believed, Direct3D will soon get the same treatment. This will result in Mantle loosing a very very keen edge in the battle for supremacy. Though this means that times will become hard for Mantle, it does not necessarily mean that Mantle is dead (as AMD's PR pointed out to us).