Ever since DX12 API was announced by Microsoft, the industry has waited its release with abated breath. The time it seems has finally come for Mantle's rival to enter the scene. Inspired by and arguably built on the same foundation as AMD's Mantle API, DirectX 12 aims to give developers and Windows OS to-the-metal control over the GPU, among other things. Interestingly it would seem that Microsoft has actually soft launched the API because it can be found in the dxdiag tool of the latest Windows 10 technical build.

Turns out, if you run dxdiag or the windows diagnostic tool in Windows 10 it will actually show DirectX 12 as the API. However, even though its actually showing DX12 as the API, you  wont be able to actually use it or do anything with it. The reason? the drivers of whatever GPU or iGPU you have will currently not support the new implementation. There will be no way for the OS to fetch the low level API so while its technically there, its actually not. But because the release from Microsoft has occurred, all that remains, is for the current GPU vendors to start rolling DX12 capable driver updates. Oh and ofcourse, you would then need an actual DX12 capable application or game. 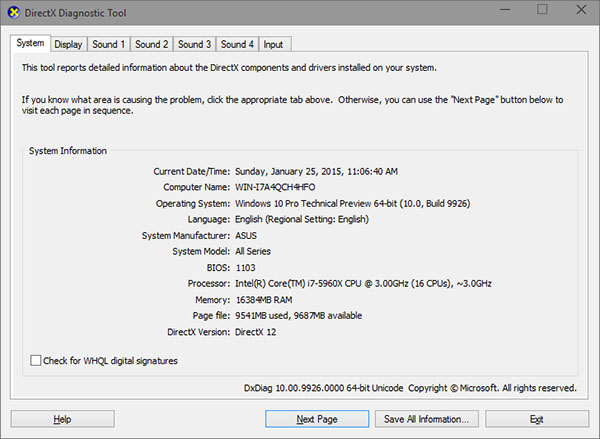 You might remember an article I did a while back that talked about how Mantle is capable of surviving in a DX12 conquered ecosystem. One of the primary features of which is the fact that any game created on Mantle API can easily be ported to DX12 with very little hassle and effort on the developers part. This means that it is highly likely for some of the first DX12 games (that Nvidia users will also enjoy I might add) to be the direct result of a quick-port from a Mantle API supported game. Ofcourse, the first consumer application to support DX12 will most probably be the 3DMark benchmark codenamed Farandole. The DirectX 12 API would allow far more draw calls than DX11, in the order of 7-10 times more. Infact the Farandole benchmark employs around 7.5 times the draw calls of DX11. In any case, the end of the tunnel is in sight, with one of the biggest changes to the gaming platform that is Microsoft Windows (and Xbox One) coming very soon.

Lets talk a bit about Xbox One now. Phil Spencer has made it clear in his tweets that Xbox One will be getting DX12, infact he claims that it will be getting not only DX12 but Feature Level 12_0 as well, something I find hard to believe since the feature level has yet to be finalized. However, as I have maintained before, consoles already have to-the-metal access to their hardware via an RTOS (Real Time Operating System) and the only advantages Xbox One will get are new graphical features. Still it would be interesting to see what Microsoft can pull off with this new update.