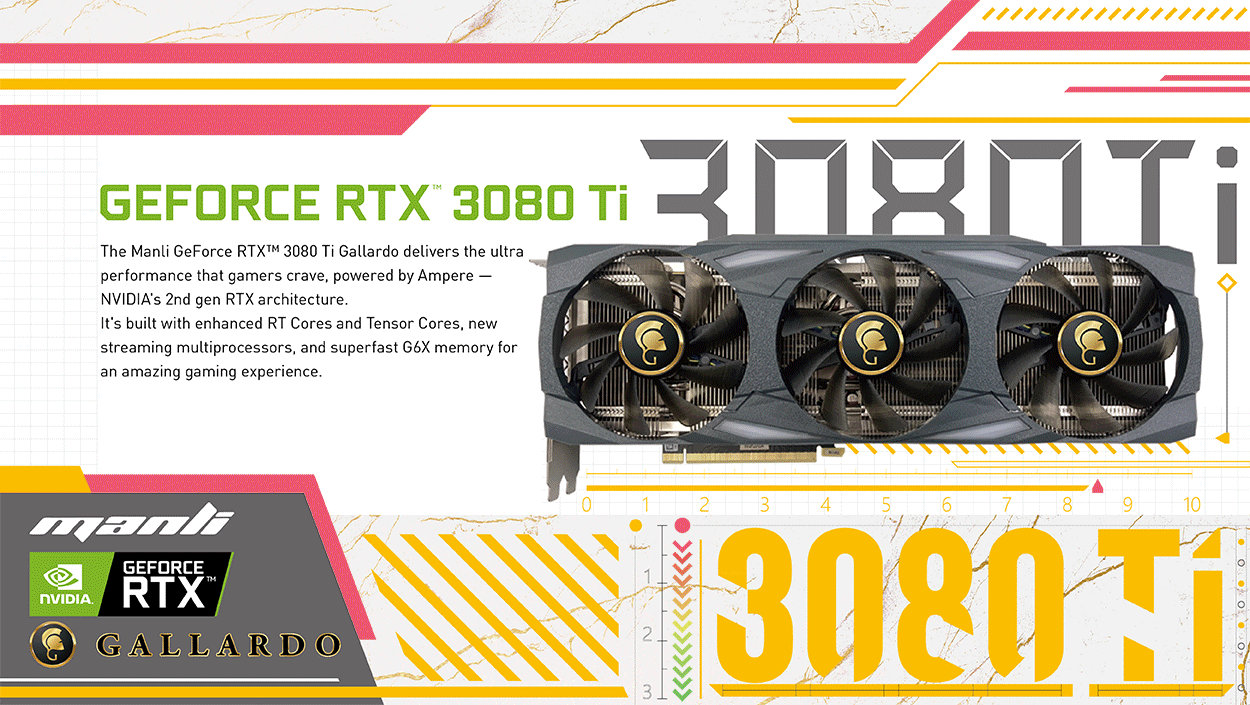 Basing the design on the NVIDIA Ampere architecture (GA102 GPU), the Manli GeForce RTX 3080 Ti Gallardo is their newest generation of graphics cards. The GeForce RTX 3080 TI Gallardo showcases both third generation Tensor and second generation RT cores, as well as brand new streaming multiprocessors. Manli's newest GPU is intended to produce twice as much power and throughput than it's previous generations and is set to be a top contender for high-end graphics processors.

The Manli GeForce RTX 3080 Ti Gallardo has three cooling fans that are ten centimeters in diameter, LED lights that can be customized with a separate software application, a sleek aluminum backplate, six-6 millimeter copper heat pipes, and a segmented heat sink to allow for highly efficient cooling speeds. For outputs, it has three DisplayPorts and a HDMI 2.1 port.

Wccftech first brought news of the upcoming releases that included the GeForce RTX 3080 Ti towards the latter half of 2020, with Manli stating that we would start seeing the individual GPU releases beginning last January. While the specifications have only slightly changed, the unit itself has physically changed to reflect not only it's higher tier components, but also possessing a look of sophistication that Manli Technology Group, LTD provides it's consumer base.

Established in 1996, Manli Technology Group Ltd. has been a major manufacturer and supplier of Computer Graphics Cards, Mining Systems, Mining Cards, and other peripherals/components. Manli has been able to fulfill various needs in the continuously changing IT industry. With an innovative R&D team and strict quality control standards, Manli's products always mean performance, reliability, and conformance.

The Manli GeForce RTX 3080 Ti Gallardo is currently available and can be purchased by these distributors, which can be accessed on Manli's product page.