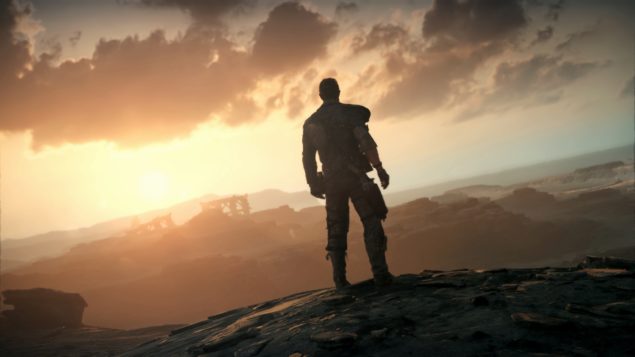 He continues to explain their future plans for the engine, and the new graphical features that will be implemented in order to make it stand out.

The Avalanche Engine is definitely evolving. We’re developing a new volumetric landscape system that will change what type of layouts we can have in open-world games. A DX12 pipeline is also in the works, and we are researching different types of cluster-based shading. We are always aiming to support freedom and destructibility on a level that I think makes our games unique.

Johnson explains about the lighting system for Mad Max:

We use a classic deferred lighting system that uses hundreds of active light sources. There’s a system for prioritizing the rendering of dynamic shadows, and the number can be scaled based on performance.

For secondary illumination from the sunlight, we use a system that filters and back-projects the ground color, this is also used to soften hard shadow edges, giving the impression of illumination from a sun halo.

He clarifies that the PC version of Mad Max is being developed as one of their main platforms and is receiving the same attention as the other versions.

The Windows version has been continuously developed as one of our main platforms and is being given just as much attention. We also have a strong track record of producing games that are fun to play on the PC.

Max traverse through "The Big Nothing", an unmapped volatile area. Max can eat small animals as rodents and maggots to replenish his health. Mad Max will feature a crafting system which can be used to craft new weapons and tools. Max's garage can be used to change and modify the car's engines, chassis, wheels, body works, including paint treatment, and the "shell" of the automobile.

Mad Max will release on September 1 2015 in North America, with a European release to follow on September 4. A closer look at the game will likely be available during E3 2015 in June. We will bring you any news regarding Mad Max as soon as it becomes available. Be sure to check out our previous Mad Max and Just Cause 3 coverage for more.