Rumor has it that Apple is testing LinkedIn integration for iOS 7. The company has already deeply integrated Facebook and Twitter in its mobile platform. It first offered Twitter this way, as the microblogging network was the first service to be deeply integrated in iOS 5. While Apple did test Facebook integration back when iOS 4 was in beta, the feature did not materialize till iOS 6, when it was officially announced that Facebook was going to be integrated in the platform. There was no announcement of LinkedIn integration for iOS 7 at WWDC 2013, but it is possible that the public release of this firmware might bring such a feature. 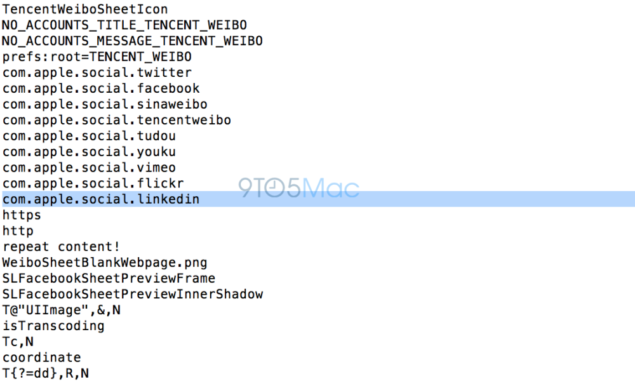 A developer has found code in iOS 7 beta 1 that points to possible deep integration of LinkedIn. The code apparently hints at a single sign-on system for this "professional" social network, which means that the integration is going to be similar to how Facebook and Twitter are backed in. However to make the feature active, certain code required to do so is missing. Apple presumably might make the feature active in future betas of iOS 7, or for all we know, it might eliminate the references that have been found in iOS 7 beta 1. A number of beta firmwares will be seeded to developers before the iOS 7 public release this fall, we can expect many new features to materialize before that.

Once users are signed in through the single sign-on system, they will be able to share content such as web links to LinkedIn. The feature will be invoked through the share sheets, which are used right now to share content from anywhere on iOS to Facebook and Twitter. There's no official word as yet on the deep integration of LinkedIn with iOS 7, we'll update you if it comes in.