iOS 7 For iPad And iPad mini Looks Like This [Image]

This entire week news has been dominated by iOS 7 and WWDC 2013. Apple made a number of interesting announcements at that event, one of them was related to the upcoming update for its mobile platform. After announcing iOS 7 for iPhone, iPad and iPod touch, Apple seeded the first iOS 7 beta 1 IPSW for developers. This particular build is only compatible with iPhones and iPod touch right now, but the company is working on a build that will bring support for its tablets as well. If you were wondering what iOS 7 for iPad and iPad mini looks like, we've got the official image right here for you. This should give you an idea of what Apple's biggest iOS update looks like on some of the world's most revered tablets.

iOS 7 has garnered a mixed response from the public. On one side we have the fanboys and fangirls who think that this is the best update ever. Then there are the critics who believe that Apple has strayed away from its own originality and has taken inspiration from rival platforms such as Android, Windows Phone, webOS and BlackBerry 10. Strong cases can be made by both sides, but the fact remains that this is the biggest update that Apple has ever made to iOS. The same reflects in iOS 7 for iPad and iPad mini, bringing a host of new features and improvements for these devices. 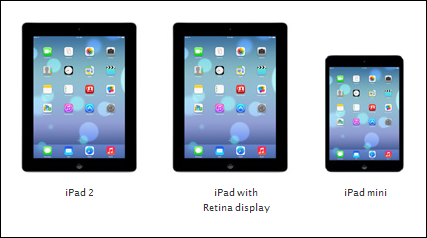 By the looks of it, iOS 7 for iPad and iPad mini does not seem to be any different in terms of UI. The only noticeable difference in these images is that the icons seemed to be a more space out, that's no surprise since the resolution differs from iPhones and iPods. It would be interesting to see how Control Center renders on these tablets, its a new action menu that Apple has added in iOS 7, using which users can easily and swiftly access basic settings as well as some native applications.

It is too soon to say now when the beta that will bring iOS 7 for iPad and iPad mini will be released. Perhaps we might see that when iOS 7 beta 2 is released later this month, though this is just plain speculation. The public release for iOS 7 is slated for fall, it presumably will be released either in September or October, around the time that Apple is expected to announce the next generation iPhone.

Downgrade iOS 7 To iOS 6 With This Easy Method