Curved screens are all the hype these days. Phones such as the LG G Flex and the Galaxy Round have taken the tech-world by storm. This article puts the G Flex in the vanguard against the mighty Lumia 1520.

Coming to the tangible part, the LG G Flex is quite slim at just 8.7mm, the Lumia is also the same at 8.7mm.  While both the smartphones share a 6.0 inch display, the LG G Flex is lighter than the Lumia 1520 ( 177 vs 209 grams). Aesthetically both the phones are a sight to behold. 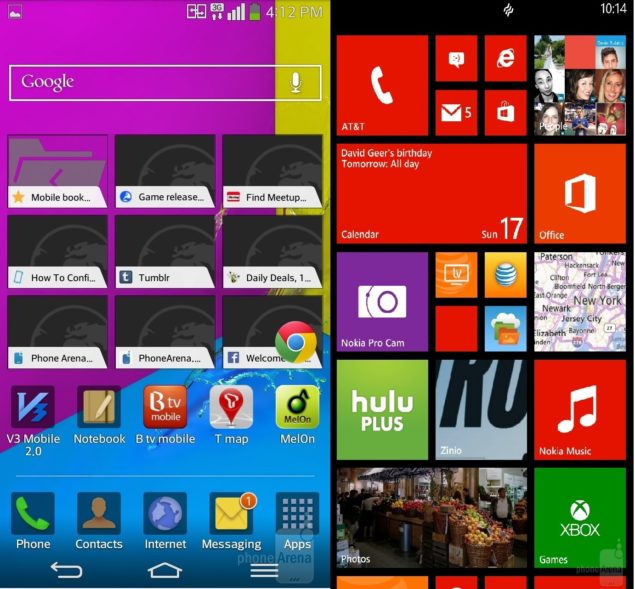 We can safely say that the High-grade polycarbonates used to make the 1520 slightly has the upper hand. The G Flex has other tricks up it's sleeve like it's "Self healing technology". Although the usability of this is low, something is better than nothing.

The LG G Flex sports a 720p screen while the Lumia houses a 1080p screen. With a large screen size of 6 inches, 720p does seem to look a bit pixelated. However the "Curved" display seems to cover the shortcomings of the low resolution screen. The vertically curved screen is splendid, without doubt the Lumia 1520 also has a very good display.

Both the smartphones have the same chipset, the Snapdragon 800. Four Krait 400 cores clocked at 2.2 Gigz for the Lumia and 2.26 Gigz for the G Flex, 60 Mhz is not a big deal. The same Adreno 330 is used to run the display however the LG G Flex with its 720p screen has half the amount of pixels as a 1080p display, this is an advantage here as the GPU has to push lesser pixels.

A 13 MegaPixel camera on the LG G Flex is perfectly adequate while the Lumia 1520 enjoys a 7 MP boost over the G Flex. The camera quality on both the units is top-notch, however surprisingly the G Flex produces brighter pictures at night even when the Lumia has OIS ( Optical image stabilization). This is due to the higher exposure time, this however introduces shakiness in the pictures. In the end, Lumia 1520 comes on top, the long exposure of the G Flex is evident from the last two pictures.

The Battery on both the phones is good. The Lumia maxes out at 3400 mAh while the G Flex has a 3500 mAh battery, both will pretty much last more than a day on low usage. We think the G Flex's low resolution will also play a positive role in battery life.

The Play store is well stocked with essential plus other non-essential apps, the Windows phone store however has not achieved this level. Even than u will fine the essential Apps quite easily, their working however is not perfect as of yet.

The Lumia 1520 is a very good phone, so is the LG G Flex. The price and availability of the G Flex is a downer as it is not readily available, the Lumia 1520 is readily available through carriers and without them. The innovation that is the curved screen does not fully justify G Flex's price, however it is a first-generation curved screen phone, better wait for the next tier. WP8 is a let down for some people but rest assured, it is here to stay and is getting better by the day.