There always will be exclusives which are a big hit and others which are a flop. And the console war is all about exclusives and a recent exclusive which the PS4 team is particularly proud about is Driveclub. With some very stunning graphics, hardly ever seen on a console, the game took the gaming industry by surprise and is one of the very few featuring special weather effects and changes. Released back in October last year, Driveclub is a work of art by Evolution Studios and is something that Sony Entertainment prides over. 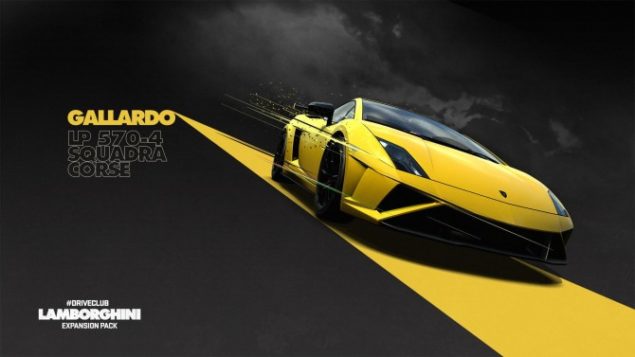 Driveclub's developer Evolution Studios had revealed some new screens showcasing their upcoming addition to the Driveclub lineup. Lamborghini Gallardo Squadra Corse will be available in an upcoming DLC package scheduled for release in the upcoming week. You can have a look at the uploaded video on youtube and the screenshots aswell. The screenshots show some very epic gaming moments in the Driveclub game. You can have a look at these and judge for yourself.

It has been quite some time since we've heard from the Driveclub team. The last news we covered about the game was almost 3 months back when the developer issued a statement thanking the fans for their continued support in improving the game.

“Everyone here at Evolution Studios wants to say thank you for the truly overwhelming level of support from you this year, especially in the time since DRIVECLUB launched in October. Your messages, your feedback, your hot lap videos on YouTube and all of the absolutely amazing screenshots you’ve shared have all been a huge source of inspiration for the team.

You’ve all been amazing and we’re extremely thankful for your continued support.

We have many more updates in the works, for the servers and for the game, which we’re looking forward to sharing with you in the new year. In the mean time, please don’t forget to claim all of the free DRIVECLUB downloads from PlayStation Store if you haven’t already and please keep sharing your thoughts and feedback with us, so that DRIVECLUB can continue to evolve around you in 2015.

Thank you all again – we really are uplifted by you on a daily basis. We hope that you all have a great holiday season and we wish you a very Happy New Year!”

Keep an eye out for the new DLC if you're a PS4 owner because this is one you don't want to miss.