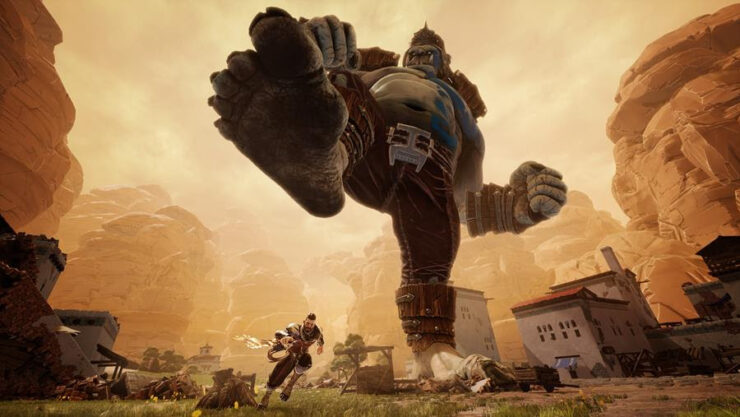 Iron Galaxy, the developer of Killer Instinct and many other titles, revealed today their brand new game called Extinction which will launch next year on consoles and PC.

Extinction will be a fast-paced action game where players will have to defend humanity from the giant ogres and their minions. Judging from the description and the announcement trailer, the game seems to have been influenced somewhat by one of the most popular anime of recent times, Attack on Titan.

As far back as anyone can remember, humanity has been at war with itself. For generations, kingdoms have fought amongst themselves while the real threat loomed in the distance. Only those trained in the ways of the ancient order stand a chance at defeating the 150-foot-tall ogres and the armies that trail in their wake. You are one of the world’s last Sentinels, a soldier named Avil, equipped with the skills to battle the endless waves of Ravenii.

In Extinction, you’ll fight massive ogres and their minions across a sprawling countryside, defending cities and rescuing native villagers torn from their homes. Swiftly define your strategy as hordes attack from the ground and air. Use the dynamic skill-based combat system to tactically disarm and dismember enemies before going in for the kill.

Extinction will feature a deep story campaign, dynamic side missions, interactive environments, several battle scenarios, the ability to create custom battlegrounds and Extinction Mode, where players will have to fight off a continues horde of assailants.

Extinction launches in the first quarter of 2018 on PC, PlayStation 4 and Xbox One.