Jailbreakers have been hard at work, trying to crack all latest Apple devices. It is difficult to do that given how Apple has patched bootrom based vulnerabilities, particularly the Limera1n exploit due to which older generation devices can still be jailbroken on newer firmwares. Nevertheless jailbreak gurus have not given up and there is hope for bootrom based exploits for newer Apple devices.

Joshua Hill a.k.a @p0sixninja has revealed via Twitter that he is working on something that is far bigger than an iPhone 5 jailbreak. According to him, he has been working on bootROM and decryption keys for all A5, A5X, A6 and upcoming A6X Apple devices. 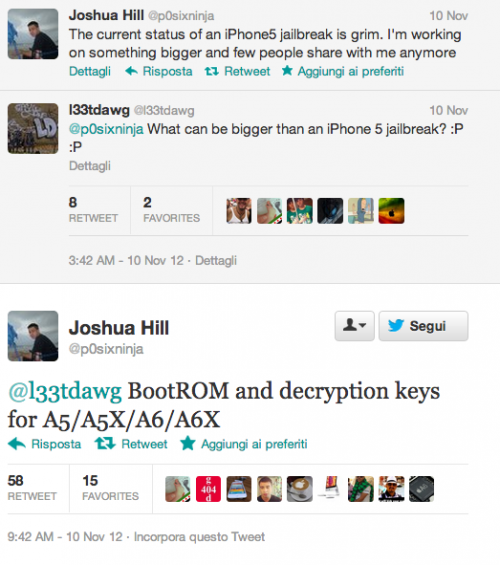 At this point in time only certain Apple devices can be jailbroken on iOS 6.0.1. It is possible to jailbreak iOS 6.0.1 tethered on iPhone 3GS, iPhone 4 and iPod touch 4G. These are the only devices left that are susceptible to the Limera1n bootrom exploit on said firmware. For newer devices such as iPad 4, iPad mini, iPad 3, iPad 4 and the iPod touch 5G there is no untethered or tethered jailbreak available.

However if Joshua Hill succeeds in obtaining bootrom based exploit and decryption keys for newer Apple devices, we can very well have an untethered jailbreak release for these devices. A5, A5X, A6 and A6X devices include iPhone 4S, iPhone 5, iPad 2, iPad 3, iPad 4, iPad mini and the iPod touch 5G. He has not given any particular time frame and we expect that it would take a couple of months before a new jailbreak solution is available for these devices. It is time to wait and watch.