With just a little over a week left until its launch, the Apple iPhone 6s has started to see the final stages in its leak chain this year. Apple's 2015 flagship smartphone duo is expected to come with several changes on board, the most important of which so far are the introduction of Force Touch and a potential camera resolution upgrade. In addition to these, Apple's also rumored to be launching an all new color option with the devices, with the iPhone 6s and the iPhone 6s Plus rumored to be coming with a Rose Gold color option as well. 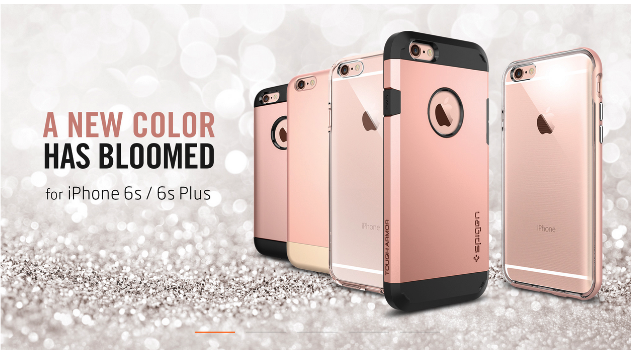 A rose gold option for the Apple flagship has been on the rumor mill for quite a while now with several images already having leaked that allegedly depict the iPhone 6s with it. Well today you can some case renders to the list as well, as folks over at techtastic have managed to uncover just these. As can be seen in the image above, the device does appear to resemble what we should be expecting from Apple this year, given that the S lineup of iPhones don't see any major design upgrades.

With the smartphone world becoming increasingly competitive day by day, Apple's hard pressed to introduce upgrades to the iPhone 6s lineup or else loose the position that it has managed to gain with the iPhone 6 launches last year. In fact, we've been seeing several speculations which believe that the iPhone 6s duo won't be seeing that strong of a market response this year.

Several upgrades are expected from Cupertino's front this year, with the iPhone 6s duo expected to feature not only an all new haptic feedback feature in the form of Force Touch, but an all new A9 SoC which should deliver significant enhancements over last year's A8. The Cupertino company has shown its prowess on the hardware side of things with the iPad Air 2's A8X and it'll be interesting to see what changes the A9 will be bringing on board. Stay tuned and let us know what you think in the comments section below. We'll keep you updated on the latest.