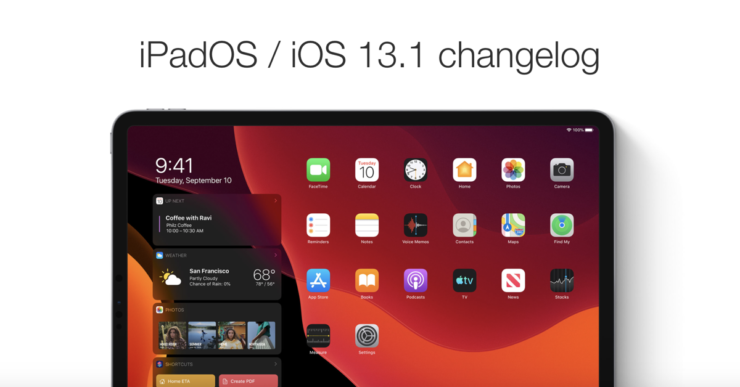 Looking for the complete iPadOS changelog for iPad? We have it here, including the iOS 13.1 for iPhone users.

Be sure to check out the following:

September 19th will probably go down in history as an interesting day for iOS users as that was the first time Apple pushed out a half-baked effort of its major software. Today, everything changes as iOS 13.1 is available for everyone with all the features which were removed from iOS 13.0. That's not all, iPadOS is here too.

There are a handful of changes in Apple's new operating system for iPad that warrants it a new name. Essentially it is iOS, but it packs features like home-screen widgets, support for USB thumb drives, desktop-class Safari and whatnot. So, rather than tell you about what is new in this update, we are going to paste the entire iPadOS changelog below alongside iOS 13.1. Have a look at all the features you get to try out with today's big release.

One glance at the iPadOS changelog and you'll realize that Apple just dumped a lot of good stuff on our plates. Desktop-class Safari browser is one of them, meaning that you can now get a proper internet experience on the go, and not have to face stretched up mobile websites ever again. If that isn't enough, then the Files app is something many users are going to love, especially those who are into editing video. Just plug your camera straight to the iPad, copy all your footage to a folder of your choice and you are good to go. No longer you have to rely completely on the Photos app for this.

iOS 13.1 is a very important update for a lot of users out there. It packs tons of bug fixes and performance related enhancements. There are features in this release that were removed with the final iOS 13.0 build, such as Siri Automations and whatnot. If there is a surprise addition waiting to be discovered here, do share it with us in the comments section below.