Take Note, Android – iOS 9 Is On More Than 60% Devices Already

Having been available for just over a month for the general public, Cupertino's latest mobile operating system for iPhone, iPad and iPod touch - iOS 9 - is now installed on over 60% of devices worldwide.

Apple went all-out when it came to testing iOS 9 before release, with the company pushing out public beta builds to those brave enough to test the OS on their primary devices and sending valuable feedback back to HQ in return. Since day one, the uptake of iOS 9 has been rather remarkable, given that the OS is packed to the rafters with a load of great features that aim to enhance the overall user-experience with additions like Proactive Assistant and enhanced multitasking capabilities for those in the ownership of an iPad. Fast forward to today, and Apple has revealed the install-base of iOS 9 to developers, revealing that its mobile OS is now installed on over 60% of devices already.

To keep things into perspective, iOS 8 took more than six months to reach the 50% adoption mark, and iOS 9 has shattered that record in just over a month. It's quite obvious that jailbreaking also has something to do with the fast adoption rate, given that the Pangu Team worked its magic in bringing an untethered jailbreak to the masses for those running iOS 9 - 9.0.2. Sadly though, Apple patched the jailbreak thoroughly with the release of iOS 9.1 download yesterday. 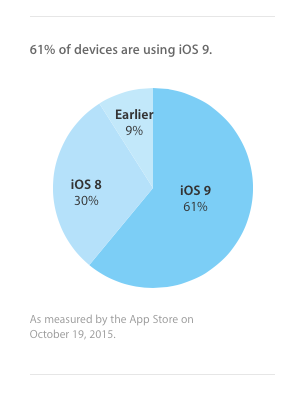 Apple's data also reveals that currently 30% of users are still sitting on iOS 8, while the remaining are using an older version of iOS. Still, if you compare those numbers to the immediate competition that is Android, you'll come to realize how swift Apple is when it comes to rolling out the smallest of updates for its mobile platform.

Speaking of iOS 9.1 - Apple's latest update to its mobile operating system brings with it a ton of bug fixes and performance enhancements, aiming to fix the woes of users once and for all. Still, given that iOS 9.1 is the first major update to the current offering, it still has a long way to go before it can be deemed absolutely bug free, especially for those who are in the ownership of older devices.

If you haven't jumped onboard the iOS 9 bandwagon already, then we highly recommend that you do so without giving it a second thought. After all, it's an absolutely free way to pump some life back into your iOS device.