Did you know that it is possible for you to test iOS 7 beta 1 for iPhone 5 straight in your web browser? Yes sir, it is indeed. Apple unveiled iOS 7 a week back at WWDC 2013. Calling it the greatest iOS update ever, Apple detailed quite a few features for us at the conference. The spotlight was definitely on its all new flat user interface, which is a big jump for Apple, considering that it was always opted for skeuomorphic elements in its UI design. There have been many debates over the old design vs the new design, if you're embroiled in one such debate and want to settle it for good, mind I recommend giving iOS 7 beta 1 for iPhone 5 a test drive in your web browser? 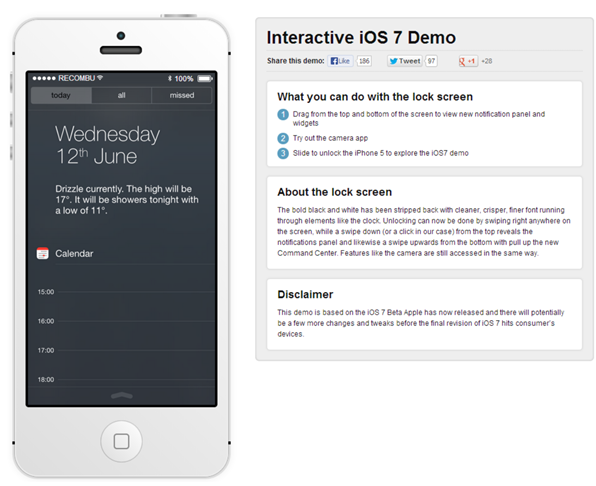 This interactive iOS 7 beta for iPhone 5 demo has been created by Recombu. It will offer you an insight in to how iOS 7 works, this means that you wouldn't have to go through the process of installing the beta firmware on your own device. Though if that is something that you might be interested in, we've already done a detailed tutorial on how to install iOS 7 beta 1 on iPhone, iPad and iPod touch.

Those who will access this iOS 7 beta 1 for iPhone 5 demo through Firefox or Chrome browser will also be able to take pictures through their webcams, via the Camera app. The interactive demo is really the next best thing as opposed to installing the beta firmware. You can test drive it for all you want, and form a notion about Apple's latest iOS platform update. New additions such as Control Center have also been replicated in this demo, which is based on iOS 7 beta 1, considering that its the only developer version that Apple has seeded up till now.

If you're indeed willing to try out this iOS 7 beta 1 for iPhone 5 demo, simply enter the following URL: recombu.com/mobile/interactive/ios7-demo/ in your browser. That's all you need to do.