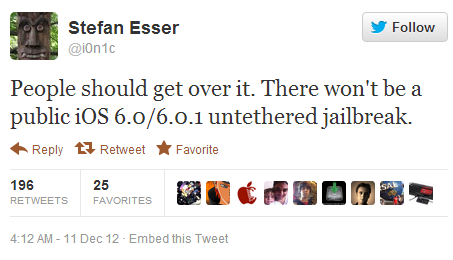 When Stefan Esser says something about an iOS jailbreak, its best to take him seriously. Keep in mind that it was he who released the untethered jailbreak exploit for iOS 4.3.3. The exploit was very well received as numerous previous attempts to gain one had been in vain. Esser's exploit had ended a stalemate which prevented the public from having an untethered iOS 4.3.3 jailbreak.

He took to Twitter earlier today and clearly told people to stop waiting for an iOS 6 untethered jailbreak release, even iOS 6.0.1 for that matter, because its just not going to happen. He didn't give out the reasons as to why he is saying this but it is possible that he is right. Other jailbreak developers have been working hard on an iOS 6 or iOS 6.0.1 untethered jailbreak but none have been successful so far. There have been indications from any of these jailbreak developers that a release is possible in the near future.

A rumor is making the rounds online that a new tool called Dream JB is going to be released soon which would bring iPhone 5 jailbreak on said firmware. However this alleged jailbreak tool is developed by an unknown team and there exists a possibility that it could be a huge scam. Stefan Esser for one has publicly come out and stated that there is no point in waiting for an iOS 6 untethered jailbreak release.

It goes without saying that jailbreak developers don't stop working on the exploits. If they strike gold, they're definitely going to release it to the public. Let's hope they do strike gold soon.