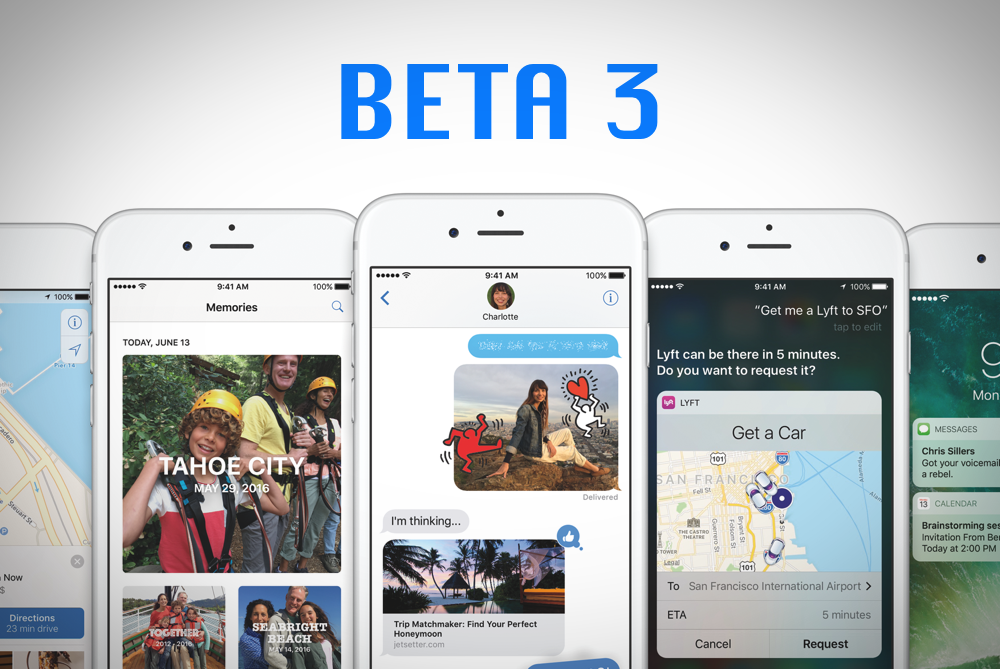 iOS 10 Beta 3 has been released and is available for compatible iPhone, iPad, iPod touch devices. Here's how you can install it right now.

iOS 10 Beta 3 Has Been Released, Get Downloading Right Now

Apple seeded iOS 10 beta 3 to registered developers just a while back. As usual, today's build is packed with bug fixes, performance enhancements, feature modifications and whatnot. Essentially it's a package that takes iOS 10 towards the right direction. The direction towards final release, to be more precise.

If you have a previous version of iOS 10 beta already installed, here's how you can update over the air.

Even if you don't have iOS 10 beta installed, you can download it still without grabbing the entire IPSW file. Here's how you can do it: Install iOS 10 Beta OTA On iPhone, iPad Without Downloading Entire IPSW.

If you're brand new to the world of installing iOS beta software from scratch, then you'll be pleased to learn things are actually quite easy to get around with. You start off with a complete backup on iTunes and iCloud. Once that is out of the way, you head over to this link and follow our guide for performing a clean install: Clean Install iOS 10 Beta On iPhone, iPad The Right Way – How To.

We will not recommend this route anymore since iOS 10 beta is now available as a Public Beta release as well. But still, if you're feeling brave enough, go ahead. Follow our guide here: Install iOS 10 Beta On Your iPhone Without A Developer Account – How to.

If for some reason you're seeing Error 14 in iTunes while installing iOS 10 beta, then here's the fix for it: How to Fix Error 14 When Updating to iOS 10 Beta.

Not feeling iOS 10 beta one bit? Here's how you can downgrade: Downgrade iOS 10 Beta To iOS 9 – How To Tutorial.

If you're a developer, we highly recommend updating to iOS 10 beta 3 without giving it a second thought. The release is loaded with a bunch of enhancements, and we're certain Apple might've tossed in a few surprises around corners this time around too. We will be, as usual, covering them in a separate article, so stay tuned.

Do let us know in the comments section if you updated your iPhone, iPad, iPod touch to the latest release from Apple.