Just a week after an Intel Tiger Lake CPU was reported within the 3DMark database, another Core i7-1165G7 10nm CPU has been benchmarked which shows remarkably improved performance vs the result we saw earlier. Not only does the benchmark show improved graphics performance but also improved CPU performance with Intel's four core Tiger Lake matching AMD's 8 core Renoir in the said benchmark.

The listing was found by tech leaker, Rogame, who not only provided the results for the Intel Core i7-1165G7 Tiger Lake CPU but also compared it with Ryzen 4000 'Renoir' APUs. Once again, Intel's Core i7-1165G7 is based on the new 10nm+ Willow Cove CPU architecture and also houses a Xe GPU based graphics chip that will compete against AMD's 7nm Vega GPU. The CPU has retains the base clock of 2.8 GHz but unlike the previously leaked benchmark, we see a clock speed of 4.4 GHz.

The 4.7 GHz listing in the previous result seemed a bit off considering that the Core i7-1065G7 had a maximum clock speed of 3.90 GHz and Intel can't just push out 4.70 GHz clocks on its immediate successor, the Core i7-1165G7. So not only does 4.4 GHz max boost clocks look more realistic but it seems like for this benchmark at least, the boosts are also working as they should. 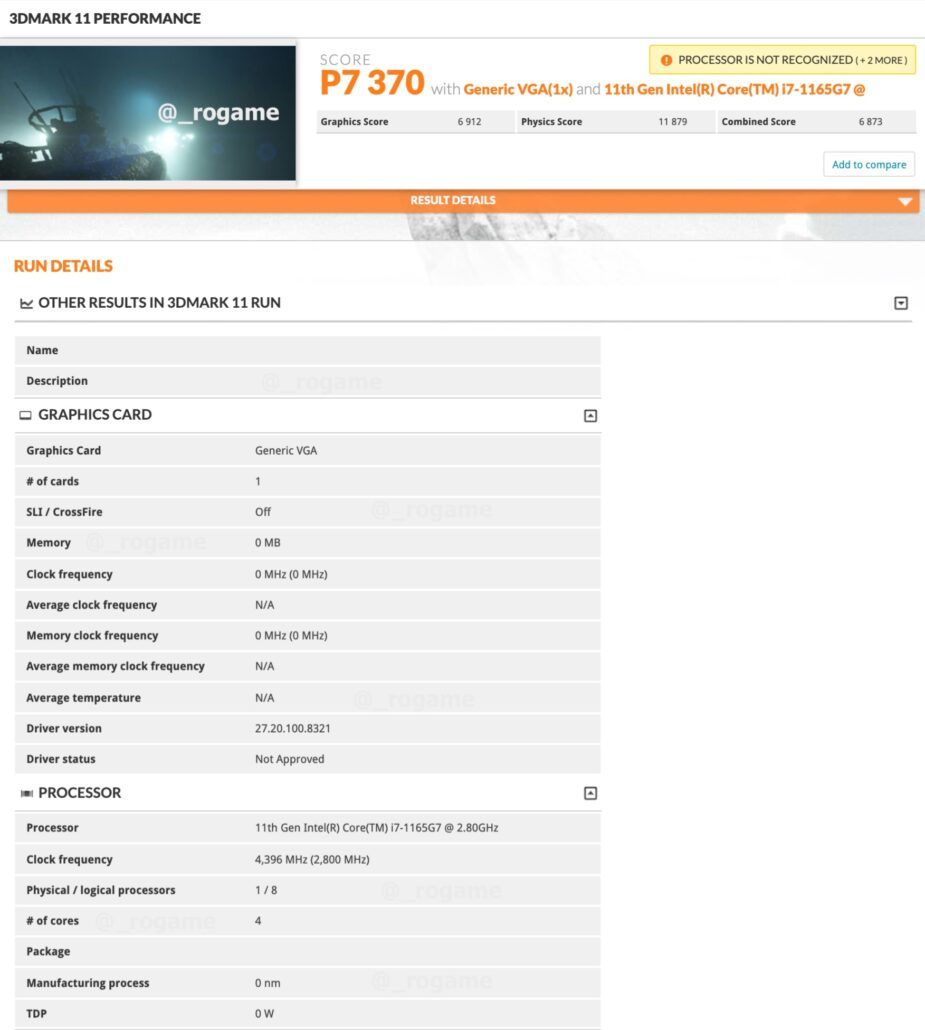 Coming to the main discussion which is without a doubt the performance of the said CPU, the Core i7-1165G7 Tiger Lake chip scores 11879 points in the 3DMark 11 Physics test and 6873 points in the 3DMark 11 graphics test for an overall score of 7370 points. Compared to the previous leak, this is almost a 50% boost in terms of CPU performance which is why the 4.7 GHz listing looks erroneous and why clocks seem to be working as they should on this specific model. It's not only the CPU side which is better this time around as the GPU side gets a 10% uplift in performance compared to the leaked result from last week. 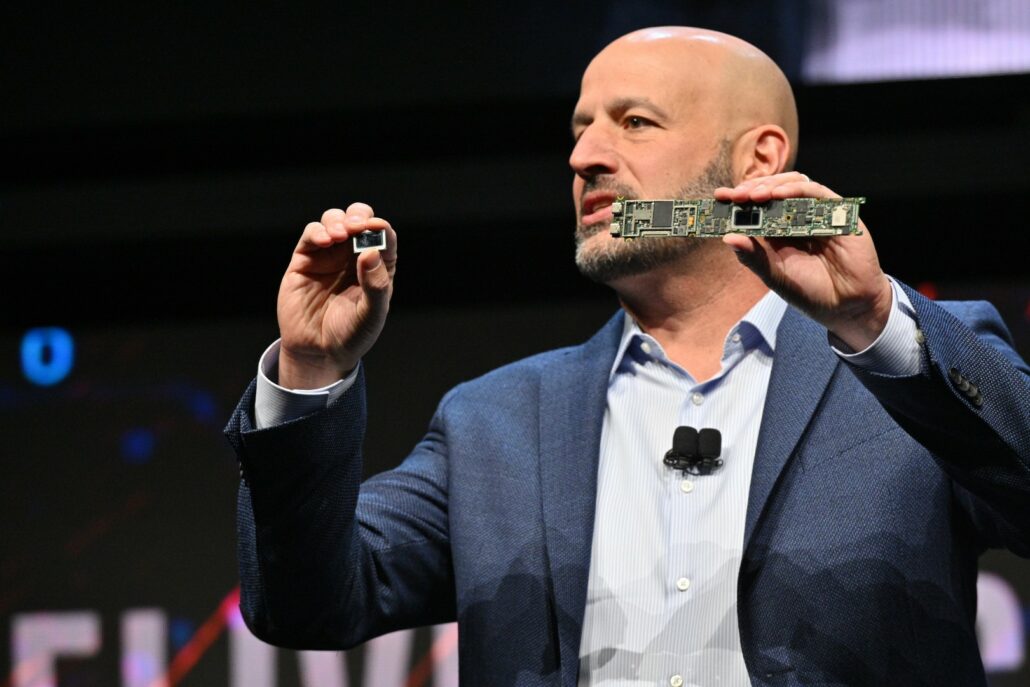 Compared to its predecessor, the Core i7-1065G7, the Core i7-1165G7 seems to offer around 25% boost in CPU and around a 50% performance uplift in graphics performance. The comparisons with Intel's existing lineup of chips look fantastic but how does the performance fare against AMD's 3rd Gen Ryzen 4000 'Renoir' APUs?

When compared with the same Ryzen 7 4800U we used in the previous test, the Core i7-1165G7 is on par with it with a score of 11879 points versus 11917 points. This is quite a CPU performance when considering that these are chips with vastly different core configurations. The Intel Core i7-1165G7 features 4 cores and 8 threads on a 10nm+ process node while the Ryzen 7 4800U comes with 8 cores and 16 threads on a 7nm process node. In terms of graphics performance, the Ryzen 7 4800U despite an update 7nm Vega graphics engine seems to lag behind the new Intel Xe graphics architecture which has a lead of 13% in the same benchmark. What is even more impressive is the same graphics score puts the Intel Xe integrated GPU as faster than an overclocked NVIDIA MX350 discrete GPU: 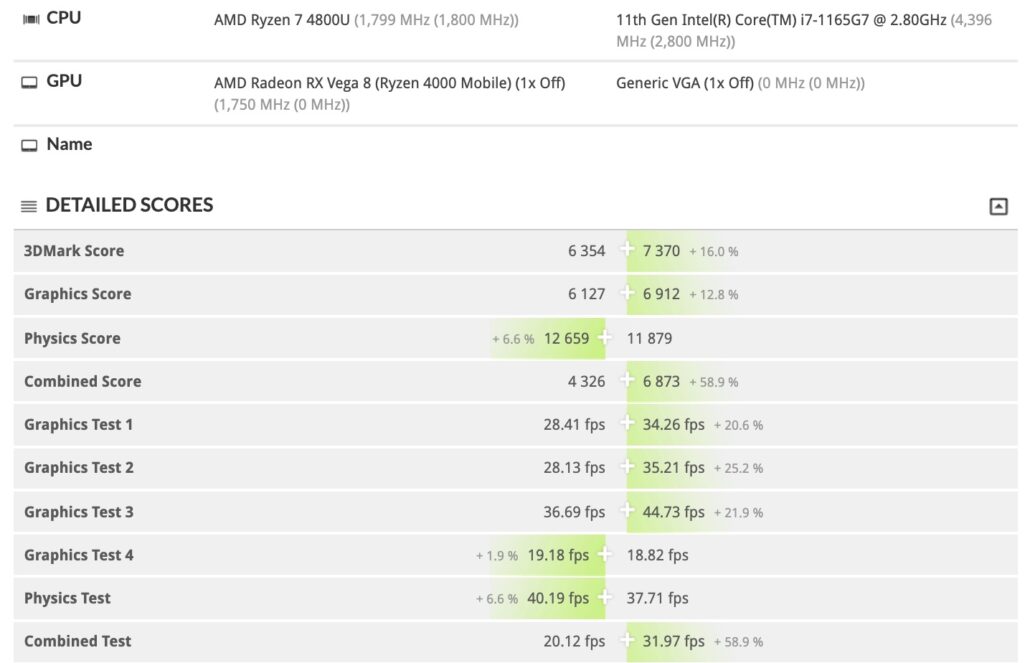 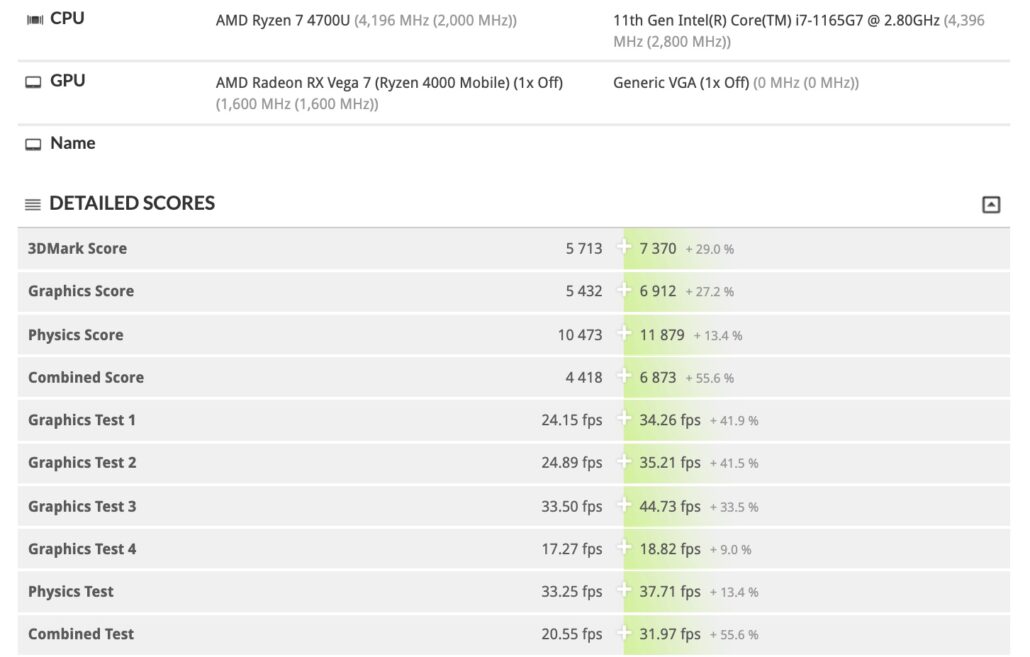 Coming to the TDP figures which are important too, the said Core i7-1165G7 was tested at 28W (cTDP up). It's not reported whether the Ryzen 7 4800U was sticking to their default 15W TDP or also configurable TDP up to 25W. Regardless, this just goes off to show how much performance variation you can see between early and close-to-launch CPUs. This doesn't mean that early test results aren't useful at all as they are a key indicator of what to expect in terms of specifications and can often indicate what type of clocks or configs we can expect on upcoming chips.

Intel's 10nm Tiger Lake CPUs are expected to be featured in a large range of next-generation notebooks and laptops this Summer. Intel has already started its promotional campaign for the new 11th Generation notebook family and you can definitely expect a launch coming in real soon!