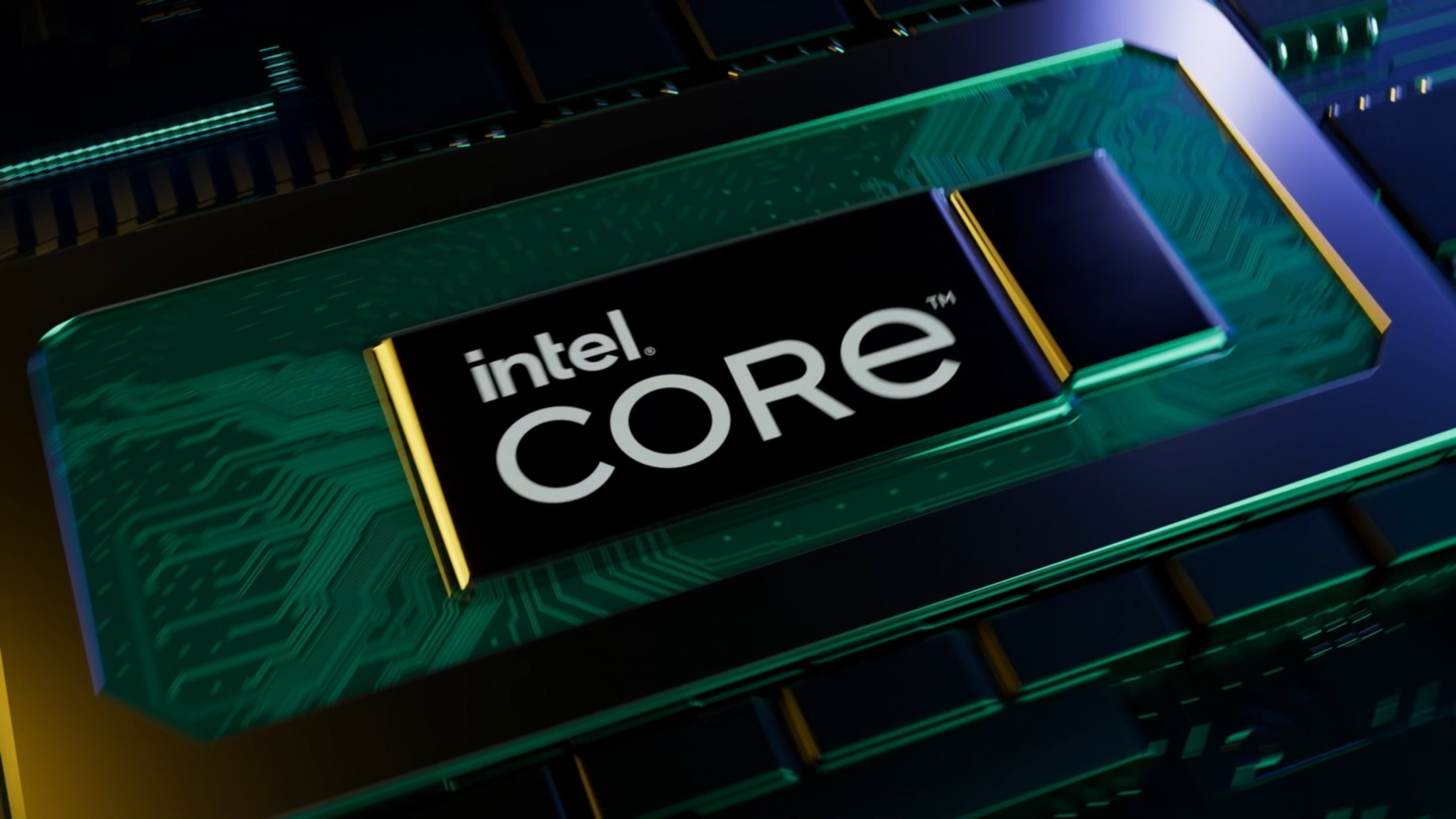 Intel is all set to regain significant CPU market share in the client PC segment versus AMD all thanks to its Alder Lake lineup, reports investment bank KeyBanc. The report also shares server statistics & AMD could be looking at major double-digit figure gains relatively soon with EPYC chips.

The report kicks off by detailing the Intel and AMD PC Notebook market share. As of Q4 2021, Intel mobile CPU units accounted for 77.8% market share whereas AMD's mobile units held a share of 22.2%. Both companies saw a 6% decline in mobile CPU shipments versus the previous quarter as both manufacturers geared up for the launch of their next-gen lineup this quarter and are shipping their latest CPUs (Intel 12th Gen Alder Lake & AMD Ryzen 6000 Rembrandt) to notebook makers. 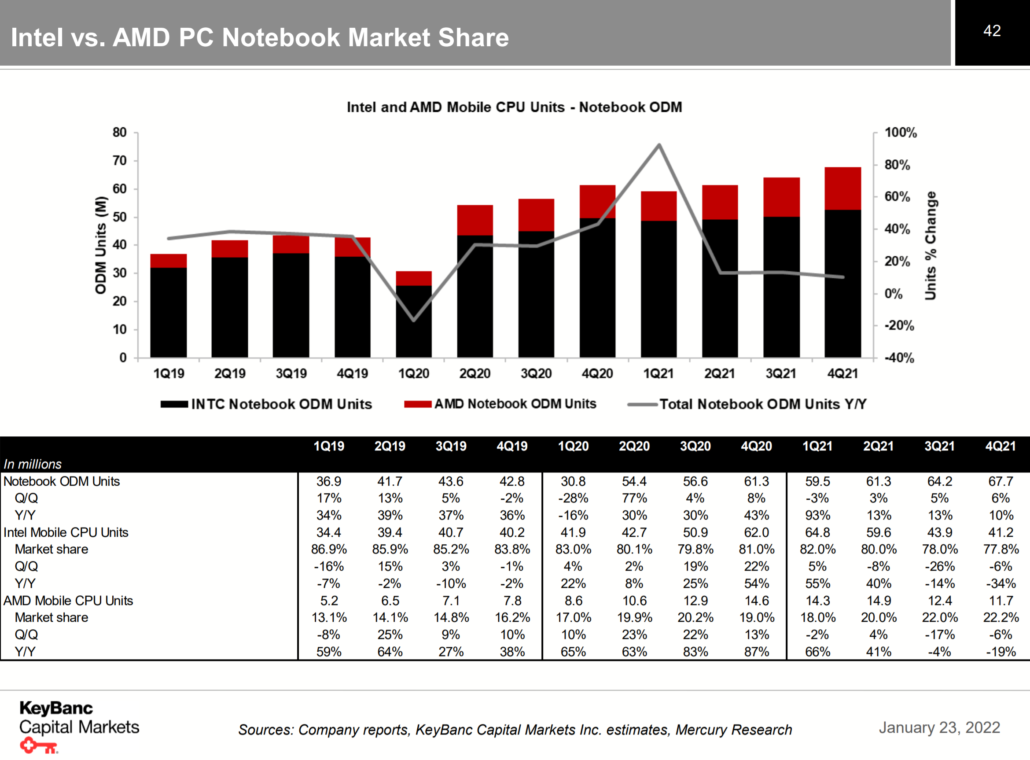 With PC notebook shipments seeing continued improvement and as component shortages beginning to ease, the rest of 2022 is going to be stable for both desktop and notebook PC segments.

It is further reported that the feedback for Intel's 12th Gen Alder Lake has been surprisingly good, offering over 50% performance improvement versus Tiger Lake chips & just 10% higher prices compared to the outgoing lineup. This has resulted in notebook makers viewing Intel CPUs as much superior to AMD's Ryzen 6000 Rembrandt lineup and ODM partners are expecting Intel to regain significant market share within both desktop and notebook platforms. The market share split going into 2022 is going to remain stable with Intel expected to conquer 85% and AMD looking at around 15% market share. AMD was also affected by ABF substrate supply constraints and the company is reportedly prioritizing share gains in servers and PC notebooks versus the desktop PC segment. That might also explain why the upcoming 3D V-Cache parts only contain one SKU, the Ryzen 7 5800X3D.

PC NB shipments improve, as component shortages begin to ease, while outlook for 2022 is seen as stable. Supply dynamics for PC NB are improving in 4Q, with total PC NB unit shipments of +6% q/q vs. -1% q/q prior. The upside to prior expectations is being driven by improving component supply on PMIC, audio codec, and IO switches. In 1Q22, we believe PC NB shipments will likely be down 7% q/q, as normal seasonality of -10% to -15% q/q is offset by easing supply shortages. Looking into 2022, NB unit shipments are expected to be flat, with enterprise demand recovering, Chromebook down, while Consumer is expected to be stable. For 2022, we expect PC NB unit shipments to be flat, driven by higher commercial NB shipments, offset by lower Chromebook demand, while mainstream consumer is expected to be stable.

Feedback on Intel’s next-generation Alder Lake CPU has been much better than expected. Feedback from ODMs indicates the performance of Alder Lake has been much better than expected with performance +50% vs. Intel’s prior generation Tiger Lake. Additionally, the pricing of Alder Lake is only expected to be 10% higher than Tiger Lake. Alder Lake’s performance is also viewed as superior, as compared to AMD’s recently announced Ryzen 6000 CPU. ODM partners are expecting that INTC will be able to regain significant market share in desktop PCs vs. AMD.

Moving over to the server/datacenter segment, here it is reported that cloud server demand remains very strong and is expected to see 10% growth in 2022 as component shortages ease. Intel's Sapphire Rapids-SP Xeon lineup is expected to be announced officially by late Q3 2022 but meaningful volume won't start shipping till mass production commences in Q4 2022.

At the same time, AMD's Milan-X lineup is currently shipping and the red team is already gearing up its Genoa chips for launch in Q4 2022 and will be mass-produced by Q1 2023. This will be a slight delay but most customers are stated to wait for next-gen EPYC rather than going for Intel's Xeon lineup. This will push AMD's EPYC market share beyond 20% by the end of 2022, particularly in the cloud segment.

Cloud server demand is strengthening, as component shortages ease; we expect 10% server growth in 2022. Overall cloud demand remains very strong, as component shortages associated with PMICs are easing, while enterprise demand remains stable and returns to y/y growth in 4Q21. Our 4Q21 unit shipment estimate of 3.53M (+3% q/q) remains unchanged despite strengthening demand in cloud given supply tightness, as these orders are expected to be fulfilled in 1Q22. For 1Q22, we estimate server unit shipments of 3.59M (+2% q/q). For 2022, we expect server shipments to grow 10% (cloud +17-19%, enterprise +5%) led by continued strength in cloud, with enterprise expected to continue to strengthen, which is up from +5% in 2021 (cloud +25%, enterprise -9%).

Expect AMD server market share to increase to over 20% this year. Feedback from the server supply chain indicates that AMD’s market share reached 11-12% in 2021 and will this year reach 20%, particularly at cloud providers Facebook and at Microsoft Azure. In our November cloud instance tracker, we observed an inflection in new AMD instances (link to November cloud instance tracker note) and expect this momentum to continue. We also see a significant runway for AMD to grow market share at Facebook, as the Company’s share is still relatively low at a LSD percentage.

Mass production for Intel’s Sapphire Rapids expected to start in 4Q22. Last quarter, we indicated Intel’s Sapphire Rapids server CPU would be launched in 2Q22 (link to last quarter’s Asia note) but that mass production would be delayed until 4Q22. At this point, the timing of this delayed launch is widely expected among ODMs and the server supply chain. However, we believe Intel is officially delaying its launch from 2Q22 to 3Q22. Extra time needed for performance tuning related to excess heat dissipation related to PCIe gen 5 remains the main reason behind the delay.

AMD’s Genoa still expected to launch in 4Q22. We maintain that AMD’s next-generation server CPU will be launched around the end of 2022 with mass production expected in 1Q23. This is delayed from the original launch date of mid-2022.

In December, NVIDIA won the highest number of contracts for new instances with nine new regions across CSPs that are powered by its AI accelerators, Intel added for new regions at AWS & Alibaba while no new region was identified for AMD. That could change in the months ahead as  AMD will continue to push its EPYC CPUs to cloud providers. AMD did see an accelerated deployment of new instances back in November 2021 but that is now moderated to +1% (m/m). For NVIDIA, their AI accelerators saw increased deployment with Ampere and Maxwell taking a charge, with a +676% & +63% increase, year-over-year.