Intel's Iris Xe Graphics chip for the upcoming Tiger Lake CPUs has been spotted. The latest chip is confirmed to be part of the 11th Gen Tiger Lake CPU family which will be introduced in the coming months for laptops and notebooks.

The latest listing of the Intel Iris Xe Graphics is spotted by TUM_APISAK (via VIdeocardz) & reveals a few new things. First of all, this is the first time the Xe GPU for Tiger Lake CPUs has been listed with the Iris naming scheme. This seems to confirm the branding of Intel's 11th Gen Tiger Lake graphics chip.

The Intel Iris Xe Graphics naming scheme looks very official compared to the standard Xe listings we have seen int he past. In addition to that, the chip seems to feature the 96 EUs (Execution Units) which equals 768 cores. This is the full-die configuration for the Xe-LP (Low-Power) architecture for mobility devices.

Intel's DG1 discrete graphics card also features the same DG1 chip which is based on a similar core config but that is purely a SDV discrete card which is meant for optimization of Xe architecture. The DG1 SDV, neither the DG1 GPU is intended to release for the desktop market. That is something that the DG2 discrete graphics card lineup is being made for. 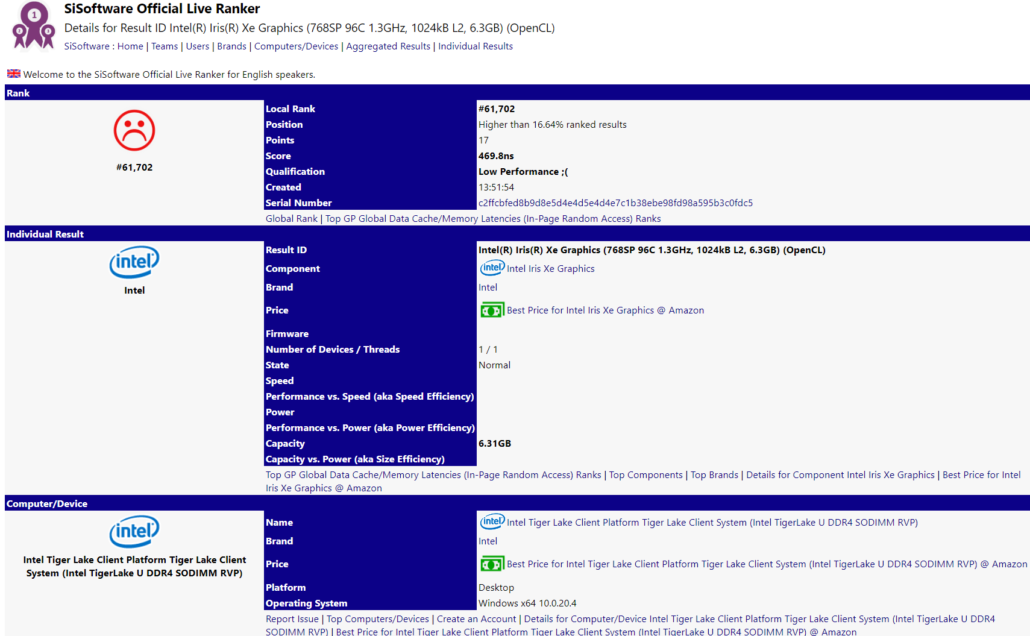 Other specifications include a 1300 MHz graphics clock speed, 1 MB of L2 cache, and 6.3 GB of total shared memory. It seems like 1300 MHz will be the standard GPU clock on most Tiger Lake CPUs as we have seen earlier benchmarks from different listings that also report the same clocks.

Do note that the so far, the branding of the Iris Xe graphics is confirmed for laptop and notebook solutions. It is not yet known what Intel would call its desktop discrete graphics card lineup while its first discrete GPU however, we might get a slight hint of the naming scheme when the DG1 discrete GPU launches for the mobility market sometime this year.

Intel Iris Xe Graphics on Tiger Lake chips which would deliver a 2x increase in perf over the Gen 11 GPU featured currently on Ice Lake chips and a 4x increase over the Gen 9.5 GPU which is featured on Skylake CPUs and its several variations (Kaby Lake, Coffee Lake, Comet Lake). We have already seen an impressive demonstration of early Tiger Lake samples running Battlefield V on a portable laptop, delivering 30 FPS average at 1080p resolution with high settings.

That and coupled with the Xe GPU architecture, the 10nm+ node should also deliver increased clocks compared to the first iteration of the 10nm+ architecture featured on Ice Lake chips. Intel's 10nm Tiger Lake CPUs are expected to be featured in a large range of next-generation notebooks and laptops this Summer. Intel has already started its promotional campaign for the new 11th Generation notebook family and you can definitely expect a launch coming in real soon!