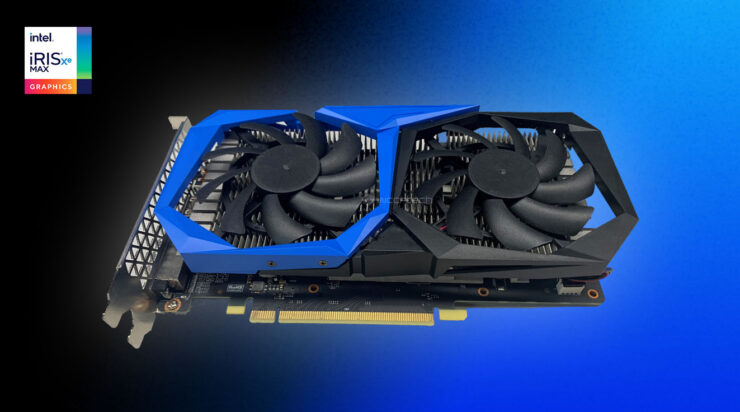 A dream that started well over a few years ago, with then-RTG boss Raja Koduri joining Intel, has borne its first fruit: the OEM-only Intel DG1 Xe Graphics Card. While the DG1 might not be the most powerful card around, it is absolutely critical as a proof of concept and necessary for Intel to get the hang of things before it jumps into the GPU market with full force.

Intel is positioning these GPUs for the entry-level market where they will be available as an OEM only offering from (currently) ASUS and Colorful. While the ASUS variant features a no-nonsense, OEM-fare fanless aesthetic that reminds us of the old days, the Colorful variant is your typical dual fan, single-slot design that looks and feels like a proper graphics card. Pictures of both these variants are given below:

The Iris Xe discrete graphics card features 80EUs (or 640 ALUs), 40 Texture units, and probably 20 ROPs if the ratio from Tiger Lake remains the same. The Xe dGPU is actually a cut-down variant featuring 16 fewer EUs than its mobile counterpart meaning this is likely a lower binned variant of the same wafer start. This is actually a very good strategy because that means Intel will be able to ship a lot more of these as the salvaged chips from DG1 will not be wasted and instead put to use in dGPUs likely sold for cheap to its partners.

It should be clocked at least 1700 MHz which will mean that it can offer a graphics horsepower of 2.17 TFLOPs - which is more than the original PS4. The TDP is going to be 30 Watts (which is peanuts for a discrete card and why ASUS can get away with a fanless design) and it will be manufactured on Intel's 10nm SuperFin technology. Considering its 5W more power-hungry than the mobility card, we can safely assume its clock speed will be higher than 1700 MHz.

The architecture is, of course, Xe-LP and it features 4GB of vRAM. While we are not sure of the quantity and when and if gamers will be able to get their hands (through OEM prebuilt) on this, it reaffirms Intel's ambition to see itself as the third player in the highly lucrative GPU business. The DG series is Intel's way of beta testing their platform and priming their partners and channels for the main show - which will not happen till 2022. Intel is also poised to release an HPG based graphics card that will be targeted at gamers and should be priced super cheaply as well.

The full press release is given below:

Intel codesigned and partnered with two ecosystem partners, including ASUS, to launch the Intel® Iris® Xe discrete desktop graphics cards (code-named “DG1”) in systems targeted to mainstream users and small- and medium-size businesses. The cards are sold to system integrators who will offer Iris Xe discrete graphics as part of pre-built systems.