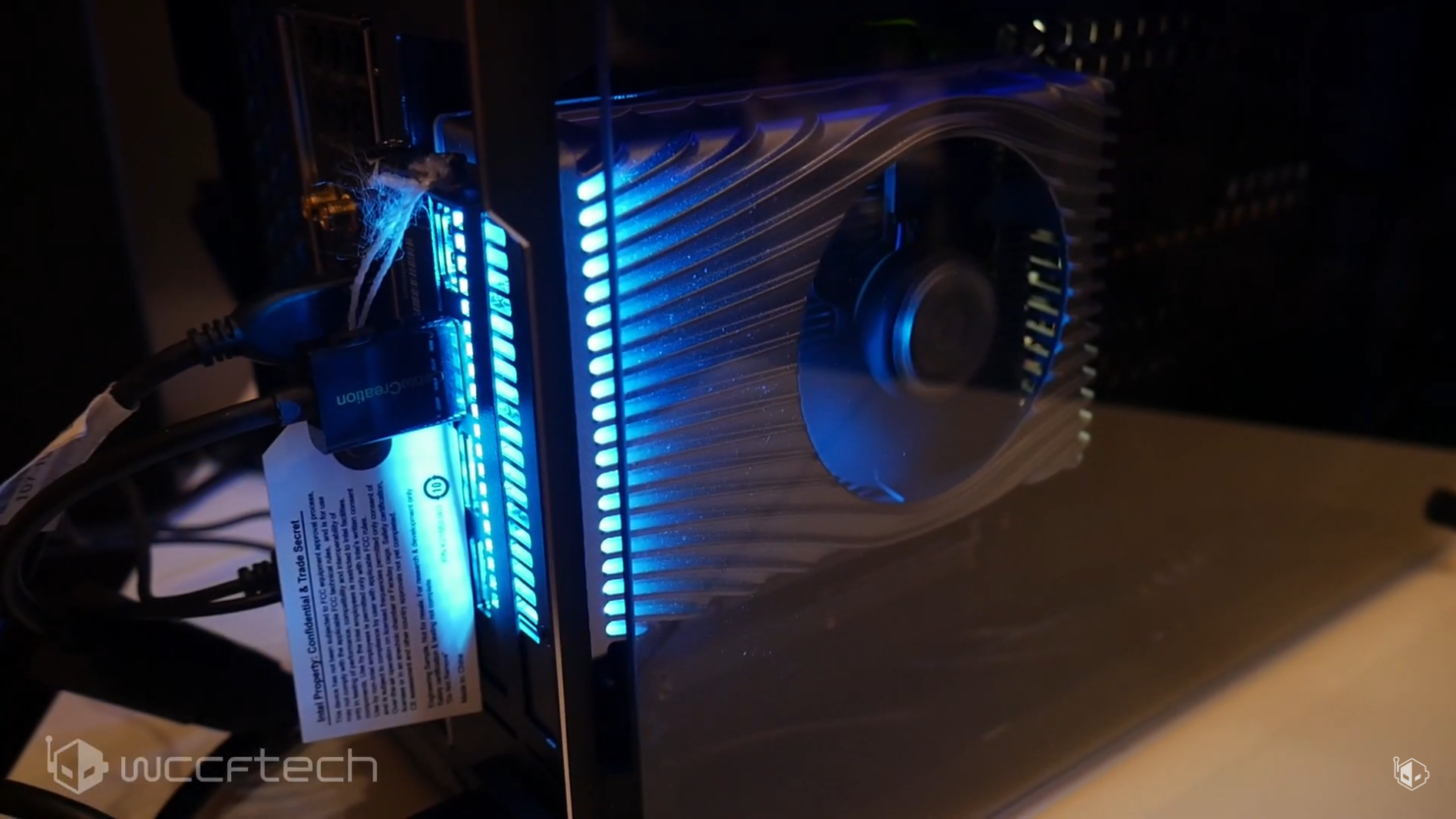 Intel's first discrete graphics card featuring the Xe DG1 GPU has been benchmarked in 3DMark. Spotted by TUM_APISAK in the Firestrike benchmark, the Xe DG1 GPU showcases performance which excels all existing integrated GPUs while playing catch up with entry-level discrete boards from competitors.

There are no specifications provided within the leaked benchmark result but what is interesting is that this specific Xe GPU was benchmarked alongside the Core i9-9900K. We know for a fact that the Core i9-9900K doesn't feature any Xe GPU onboard itself so this is clearly a test board of the DG1 GPU which will be featured on mobility products. 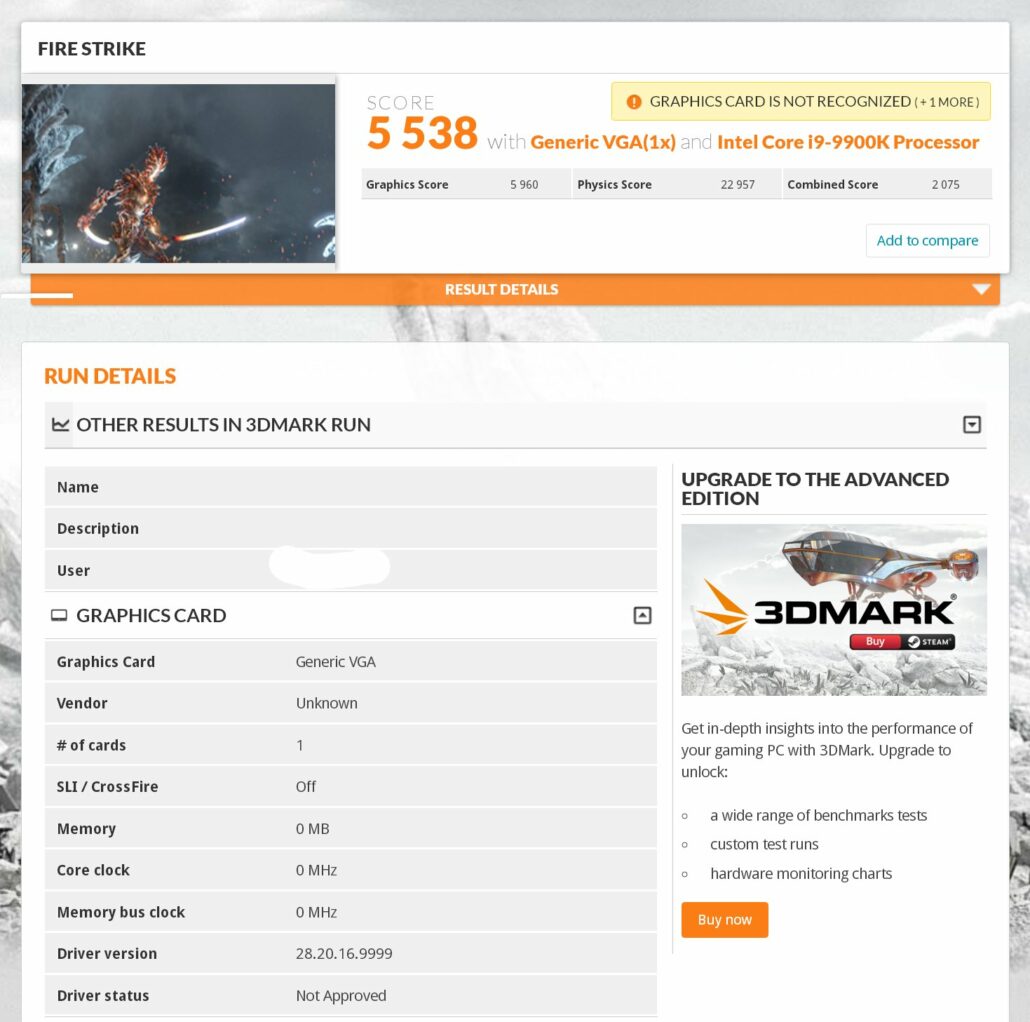 While the result is nothing to be excited about, it does give us a glimpse of what to expect from a more optimized version of the Xe DG1 GPU which will be embedded in notebooks and laptops in the second half of 2020. Once again, we had stated this earlier but it needs to be cleared out that all Xe DG1 graphics boards are either test units or SDV (Software Development Vehicles) and won't get a retail launch. The Xe DG1 GPU is primarily a mobility GPU that will be featured in laptops as either a discrete GPU option or an integrated GPU on Intel's Tiger Lake CPUs.

The former makes it more interesting which is if Intel could manage to deliver optimized graphics performance in the end product which matches entry-level graphics cards than AMD and NVIDIA will definitely feel the heat. AMD currently relies on its Vega GPU architecture for integrated GPU which has seen a refined 7nm version with Renoir APUs while NVIDIA is still using Pascal to power its MX line of entry-level discrete chips for mobile form factors with a Turing based lineup in the works.

Just for comparison's sake, a Ryzen 7 4800U with an 8 CUs clocked at 1750 MHz in a 25W design scores around 3543 points in the same benchmark. This gives the Intel Xe DG1 GPU a lead of around 70% over the 7nm enhanced Vega GPU from AMD. But considering that this is a desktop card that sips in more power than a 28W Tiger Lake CPU, even still, we can think Xe DG1 integrated chips can deliver anywhere from up to 20% to 40% performance improvement over AMD's mobile solution which is impressive.

The Pascal-based MX350 scores around 4500 points and even that puts the Intel solution at least 32% ahead of the NVIDIA discrete GPU. You can see more discrete and integrated GPU results in 3DMark Firestrike in the table below:

Recently, an Intel Xe DG1 GPU was spotted with key specifications which included 96 EUs (standard configuration for Xe-LP discrete GPU), 768 cores clocking in at around 1500 MHz for a total single-precision Compute output of 2.3 TFLOPs. There's also 3 GB memory which could be featured along a 96-bit or 192-bit bus interface. A 96-bit bus interface is more likely considering the card houses a low-tier chip in a very compact form factor. Other details such as texture units and ROPs have not been revealed but we will definitely get more information close to its launch.

Intel has also released its first Xe GPU optimized drivers which show that they are very serious in getting its first discrete tier GPU launch right as the first impression matters a lot. In a couple of months, we will see the first Tiger Lake powered laptops with Xe DG1 class GPUs shipping inside them. We will definitely share more performance figures as we get close to launch. For those who are waiting for more performance from Intel's end, they are indeed working on DG2 GPUs that will power the high-end enthusiast cards and mainstream options but come out later.