Intel is soon supposed to launch their Haswell Refresh platform which will introduce new processors and the latest 9-Series chipset. The Intel Haswell Refresh is planned for launch on 11th May 2014 but the preview of Intel's Core i7-4790 has already been published by technology and hardware site, TweakTown.

Intel initially launched their fourth generation Haswell processors in June 2013 at Computex. The processors featured the latest 22nm core 3D Tri-gate transistors technology which improved the IPC and efficiency by a decent amount of Ivy Bridge. The upcoming Haswell Refresh processors are no different then these featuring bumped up clock speeds and more SKU design schemes such as low TDP and low power variants available at similar price points.

A total of 26 desktop processors have started shipping to retailers across the globe and would be available for sale in the upcoming days prior to their official launch planned for next month. The Core i7-4790 will be the flagship processor of the Haswell Refresh lineup and the first 22nm consumer CPU to obtain clock frequency of 4 GHz. It will feature 4 cores and 8 threads. The Core i7-4790 will also be available in ‘S’ and ‘T’ variants which will retail at the same price of $303 US but will feature lower clock speeds since they are aimed towards low TDP and low power platforms. The entire Haswell Refresh lineup can be seen in the chart provided at the bottom of this article

TweakTown who previewed the Core i7-4790 tested the processor on a Z97 motherboard which is the codename for Intel's latest 9-Series chipset. The Z97 motherboards from ASUS, EVGA, Gigabyte, MSI, ASRock have already detailed by us prior to their launch and you might want to check them out if you are in the market to get hands on latest products. From the results, it can be noted that the Core i7-4790 shows just about 3-5% performance increase over Haswell Core i7-4770K with the former having the ability to overclock as well.

We knew this since the start and we weren't actually expecting any major gains with Haswell Refresh since they are just higher clocked CPUs with the same architecture under their hood. Even the upcoming Devil's Canyon which use the same Haswell architecture will feature support for better overclocking due to enhanced thermal packaging components and use of better quality TIM between the IHS and die of the processor. These processors are expected to launch on 2nd June, a month after the launch of the current Haswell Refresh series.

The only advantage of the 9-Series platform is that it will support Haswell, Haswell Refresh, Devil's Canyon and Broadwell processors. Intel Haswell Refresh itself would be compatible with the older Z87 chipset boards which means that users can easily upgrade their processors or change their motherboards without the need to buy a new processor on 9-Series. You can check out the performance charts of the Core i7-4790 below (For the full preview, visit TweakTown): 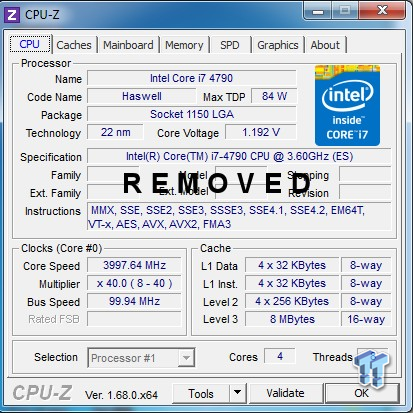