EVGA has gone with a complete black color theme on their Z97 motherboards except the Z97 FTW which comes with the black and red color theme which has been used by several other manufacturers. Each motherboard has been aimed towards a different price range with the flagship Z97 Classified listed for pre-order at $379.99 US and the Z97 FTW and Z97 Stinger available at $199.99 US. You can find the links for pre-order below: 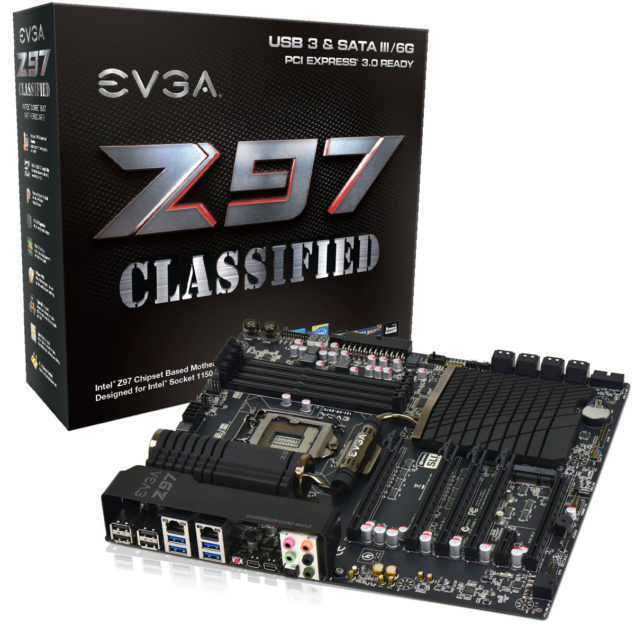 The EVGA Z97 Classified is the flagship motherboard from EVGA featuring the Intel Express chipset and LGA 1150 socket. The motherboard is built with high quality components which can be seen from the top view of the board. The EVGA Z97 Classified comes with an 8-Phase PWM supply while the LGA 1150 socket is powered through dual 8-Pin connectors for unprecedented overclocking support. EVGA has been known to include some neat tricks to allow madders with neater aesthetics and cable management hence we are looking at several right angled ports including the 24-Pin ATX connector for easier routing of the bulky wire. The motherboard in total provides a total power of 600W to the CPU socket so make sure to have LN2 stocked in your apartment when overclocking this bad boy.

Additional specifications include 8 SATA 6 GB/s ports and a USB 3.0 header. Expansion slots include  five PCI-e 3.0 x16 slots and a single PCI-e 3.0 x1 slot including a M.2 SSD slot to support Intel's NGFF form factor drives. EVGA's classy board is an E-ATX form factor so it'll require mid to full tower chassis to fit inside easily. The board features a massive heatsink with heatpipe design which spans the entire length of the board from the top PWM down to the PCH. Additional OC goodies include an onboard CPU temp monitor LED, Triple BIOS support, EZ Voltage read points and PCI-E disable switches. The motherboard will hit retail for a price of $379.99 US. 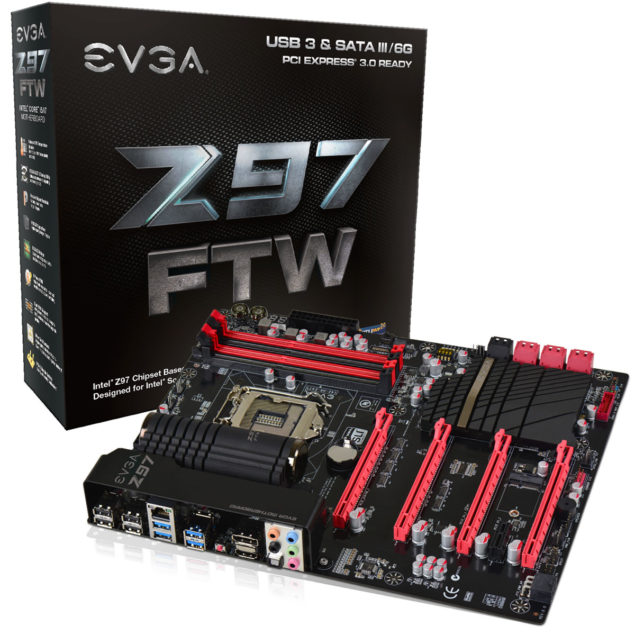 The Z97 FTW is the more cost effective offering which comes with a tons of features. The LGA 1150 socket is powered through a 8-Pin connector and the board is fitted with a 6-Phase PWM supply for overclocking support and stability. Two sets of heatsinks are toppled on the PCH and VRMs for passive cooling. The board includes Dual BIOS, 6 Layer PCB, EZ Voltage read points, PCI-e disable switch and an onboard CPU Temp monitor LED. 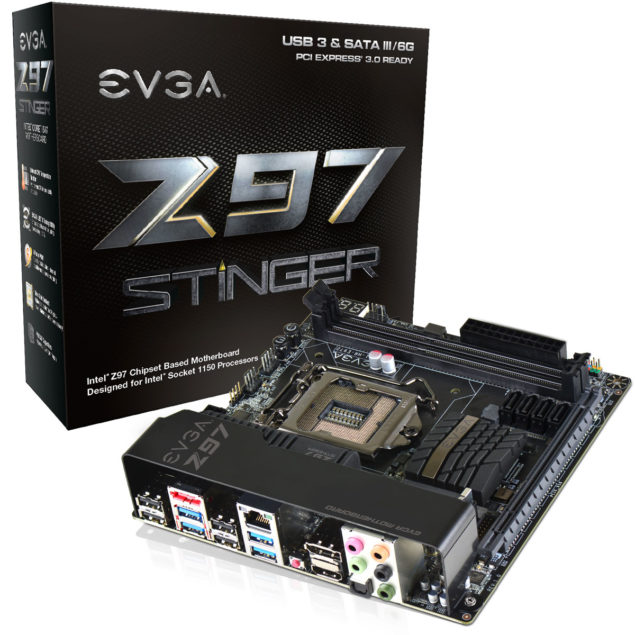 Last up, we have the EVGA Z97 Stinger Core 3D which is an M-ITX form factor board featuring the Z97 Express chipset and LGA 1150 socket. The board is equipped with a 6 Phase PWM fitted with top of the line components and powered with a 8-Pin power connector along with the 24-Pin ATX connector. Two DDR3 DIMMs support a maximum of 16 GB of memory with speeds of upto 2666 MHz + (O.C). The board also features a passive heatsink design, 10 Layer PCB and an onboard CPU Temp monitor LED. 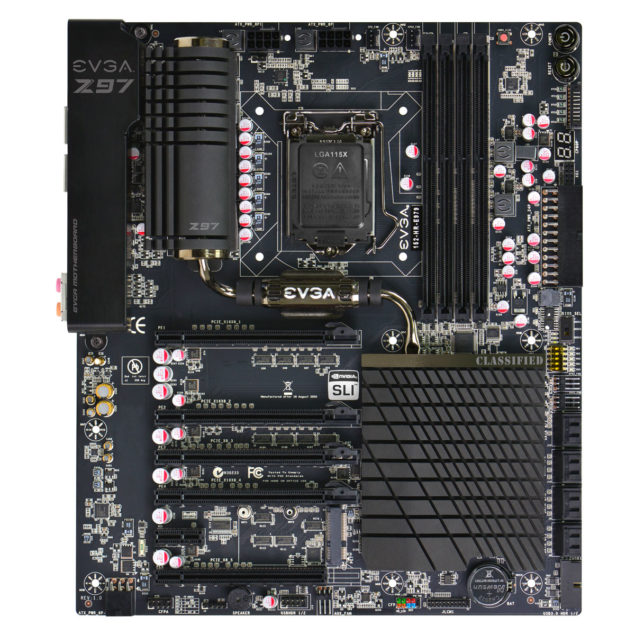 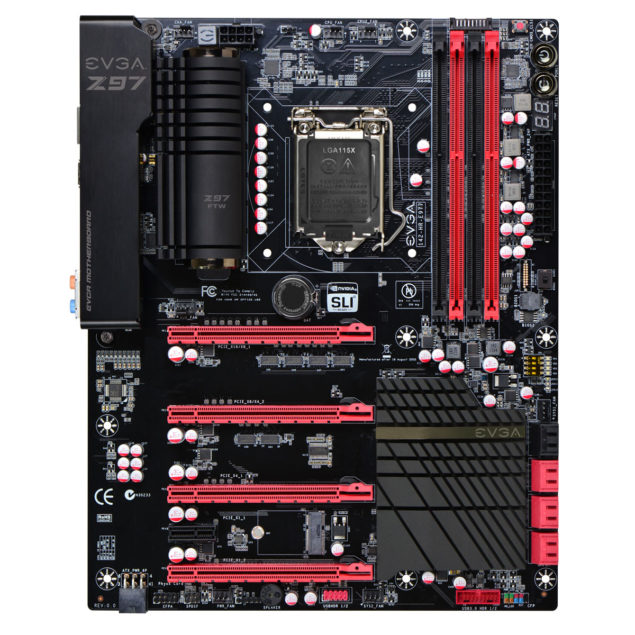 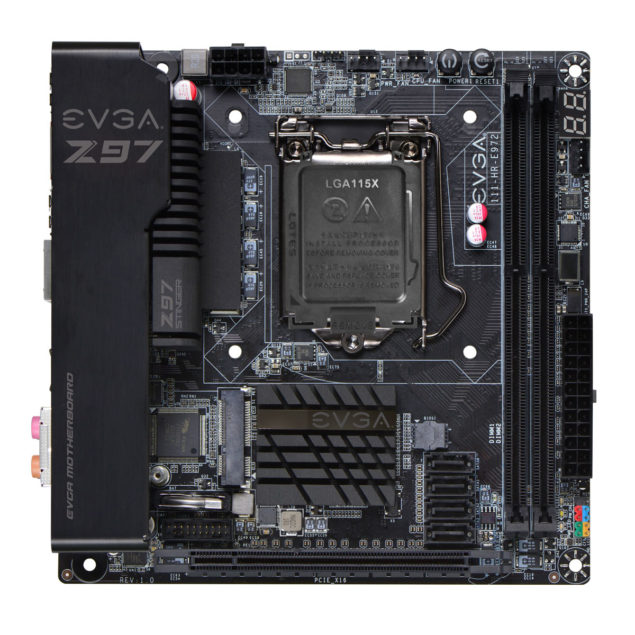