The MSI 9-Series has a massive motherboard lineup that's headed to consumers next month and while we can't talk about their specific chipset, we can show you pictures of the entire lineup which you would be looking at soon. Some motherboards such as the XPOWER, MPOWER MAX and Gaming series have already been detailed but we will take a deeper look in the design scheme of the new products. 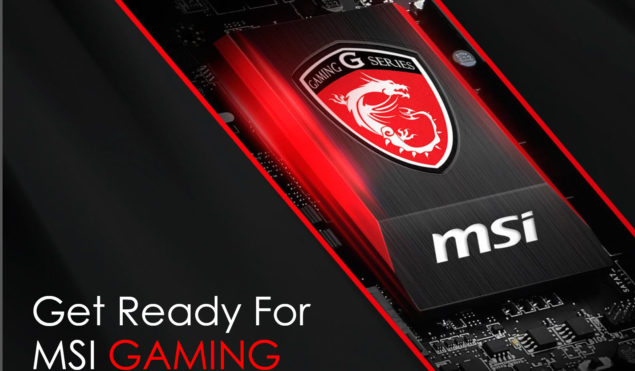 First, we will detail the MSI OC series which includes three new products including the flagship XPOWER AC and MPOWER MAX AC motherboards. MSI introduced their MPOWER and XPOWER brands to the mainstream lineup last year with the Z87 chipset and are relaunching an improved version this year that makes of Intel's latest 9-Series chipset. So let’s get on with the OC 9-Series Motherboard lineup from MSI which includes 3 motherboards listed below: 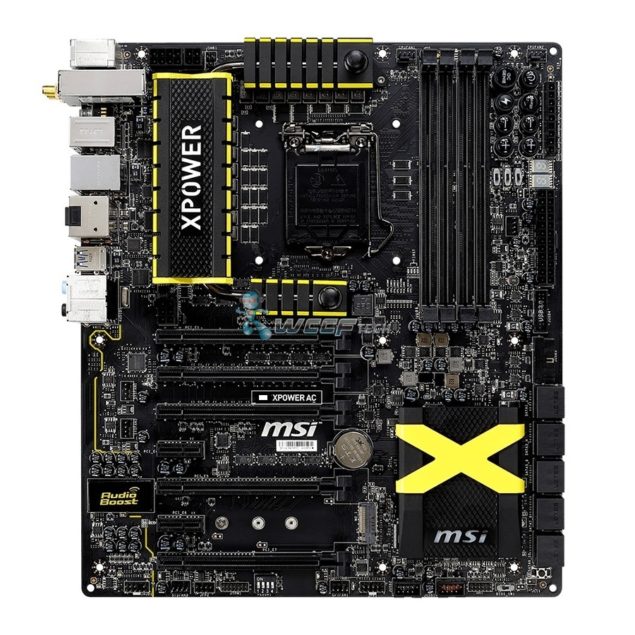 MSI’s next-gen and massively feature packed XPOWER AC will have the latest Delid Die Guard which will protect the CPU die and the PCB after the heatspreader has been removed from the processor. This feature will obviously help overclockers alot who want to break world records. We can also see a teaser of MSI XPOWER AC from the teaser shot which features a yellow and black color theme just like its predecessor, the Z87 XPOWER which was a top of the line motherboard.

Now the most interesting thing about the new board is that it will feature built-in water cooling support which is copper based and allows existing or non-existing users with water-cooled looped pipe setups to gain more cooling performance. This will help cool the MOSFETs and VRMs situated underneath the large XPOWER AC heatsink that is a neat new design which features a 32 Phase VRM for unprecedented overclocking performance and stability. It is powered by an 8-Pin plus 4-Pin connector configuration. It features four DDR3 DIMMs which are able to support memory with frequencies of 3300 MHz (O.C) and maximum capacity of 32 GB. Several V-Check Points and OC tuning switches can be found near the DIMMs.

For storage, the board features 10 SATA 6 GB/s ports and a USB 3.0 header. Expansion slots include five PCI-e 3.0 x 16 (x16/x16/x8/x16/x8) and two PCI-e 3.0 x1 slots along with a single M.2 slot. Audio Boost and several other I/O ports can be found on the motherboard which makes it MSI's top of the line 9-Series product. A 6-Pin power connector can also be found on top of the PCI-e 3.0 x16 slots which adds stability when running multiple cards. 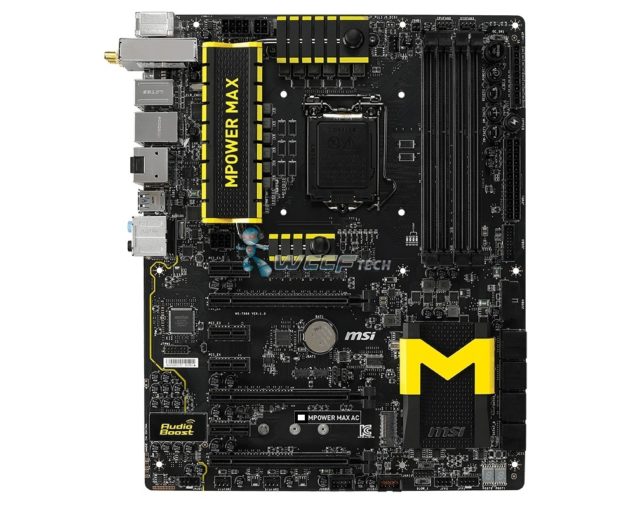 The second board which will feature the new and improved MSI built-in water cooling technology is the MPOWER MAX AC which features a 24 Phase VRM powered by an 8-Pin plus 4-Pin connector configuration. The V-Check Point 2 and OC switches can be found right next to the DDR3 DIMMs. Expansion slots include three PCI-e 3.0 x16 and four PCI-e 3.0 x1 slots.

The board has 8 SATA 6 GB/s ports and a M.2 PCIe SSD interface near the lower PCI-e expansion slots. Another 6-Pin power connector located near the top most PCI-e slot provides additional power to the expansion slots while using multiple graphics cards. Expansion slots include three PCI-e 3.0 x16 and four PCI-e 3.0 x1 slots along with a single M.2 SSD slot. 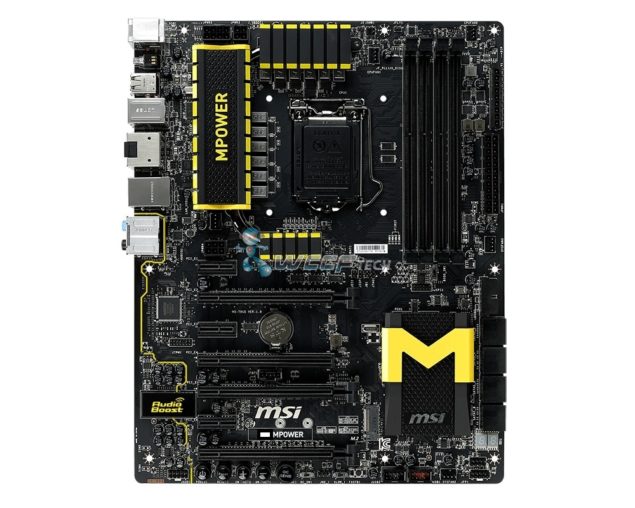 The MSI MPOWER is a cut-down and cheaper variant of the MPOWER MAX /AC featuring 24 Phase PWM supply with the latest LGA 1150 socket that is powered through the 8 + 4 Pin power configuration. It features a similar looking heatsink but comes without integrated water-cooling support. The heatpipe solution is used to transfer heat through the different sets of heatsinks. A seperate heatsink with a large "M" label is used to cool the PCH.

The MSI MPOWER features four DDR3 DIMM slots which will support memory with speeds of upto 3300 MHz (O.C) and 32 GB of maximum memory capacity. The expansion slots include four PCI-e 3.0 x16 (x16/x8/x8/x4), three PCI-e 3.0 x1 and a M.2 slot for NGFF form factor SSD support. Storage includes 8 SATA 6 Gbps ports while the USB 3.0 header is located right next to them. An additional 6-Pin PEG connector provides additional power for motherboard when using multiple graphics cards to add stability. OC switch and Audio Boost technology can be spotted on the bottom left corner of the board which add in to the feature set of the MSI OC series boards.

The Gaming lineup from MSI features the  latest V-Check Points 2, OC Engine, Military Class IV components, Delid Die Guard (XPOWER AC), M.2 interface, Audio Boost 2 and last but not least, new design schemes. Well, today we have the entire 9-Series motherboard lineup for you to feast your eyes upon which are detailed below:

So let’s get on with the Gaming 9-Series Motherboard lineup from MSI which includes a total of 6 motherboards listed below: 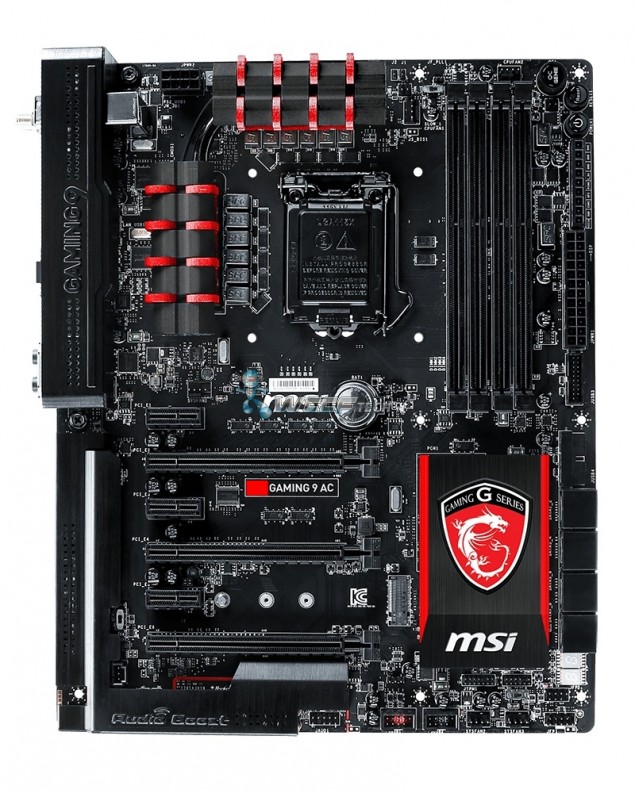 The flagship and most featured packed entry in the Gaming lineup is the MSI Gaming 9 AC motherboard. This flagship product comes with a neat new design and a cool set of features for gamers and enthusiasts for instance, the LGA 1150 socket supports the Intel Haswell, Haswell Refresh, Haswell Refresh K-Series (Devil’s Canyon), and the Broadwell K-Series which arrives in 2015. So to sum it all up, this and all the other 9-Series motherboards have a longer support time.

The LGA 1150 socket is powered by a 12 Phase power design and provided juice through a single 8-Pin PCI-E powe connector in addition to the 24-Pin ATX connector. The military class IV components are seated beneath an new and improved heatsink design which involves heat transfer through heatpipe. Four DDR3 DIMMs offer support for memory upto 64 GB with speeds of upto 2666 MHz (O.C+). The motherboard features the V-Check Points 2 which will let users use 2 ground connectors so that you now can use up to 3 multi-meters at the same time. The Power On/Off, Reset and OC Engine switches can be found next to the DIMM slots. For Expansion, we are looking at 3 x PCI-e 3.0 x16 and 3 PCI-e 3.0 x1 slots. There’s a M.2 PCIe slot which will be able to support mSATA SSDs with a good length for easier installation. The 9-Series chipset itself is fused underneath a large Dragoon style Gaming G-Series heatsink. MSI has been using the brand since some time now on their Gaming products which include note books, motherboards and graphics cards. For storage, we have 8 SATA 6 GB/s ports, a USB 3.0 header and a LED for diagnostics.

The MSI Gaming 9 AC also features the latest Audio Boost 2 with Xtreme Audio DAC (Digital to Audio Converter) chipset which improves sound quality radically when listening through speakers and headphones. The board also comes with the Killer E2200 LAN chipset and 802.11AC which improves wireless connectivity and inter-net speeds. Prices are unknown at the moment but we expect a $249-$299 range for this flagship part. 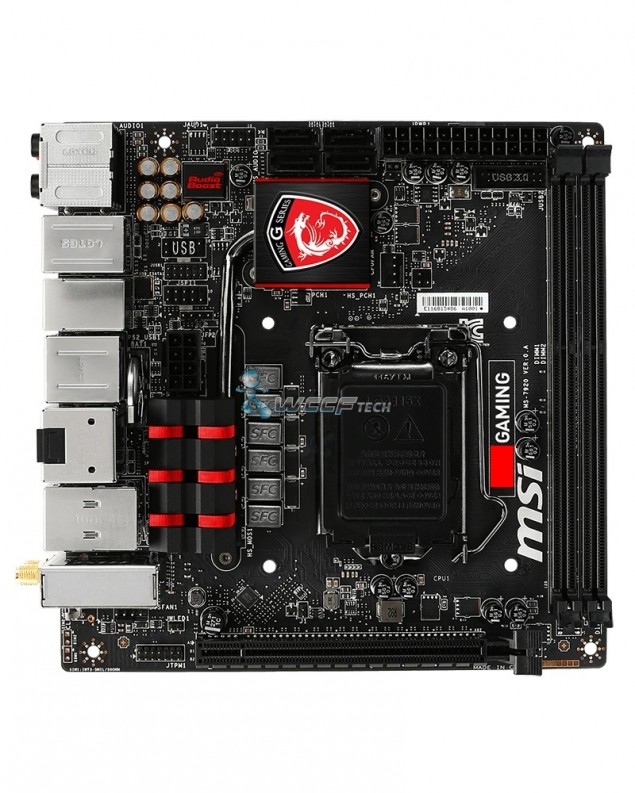 The most interesting board of the Gaming 9-Series motherboard lineup from MSI has to be the Mini ITX Gaming board. Featuring the same LGA 1150 socket, the motherboard comes in the Mini-ITX form factor which enables small form factor PCs and interesting concept design by modders and enthusiasts.

From a design perspective, the Mini ITX Gaming is a step froward by MSI equipped with a 6 Phase supply that is powered through an 8-Pin connector which will allow some decent overclocking on the new motherboards. Expansion slots include a single PCI-e 3.0 x16 and two DDR3 DIMM slots supporting a max of 32 GB memory with frequencies of 2666 MHz (O.C+). The motherboard has a 8-Layer PCB design and packs four SATA 6 GB/s ports for storage. A USB 3.0 header is also located right beneath the 24-Pin ATX connector. The VRM and PCH are hidden and cooled by the Dragoon themed heatsink design which involves heatpipe thermal transfer and goes well with the board’s layout. 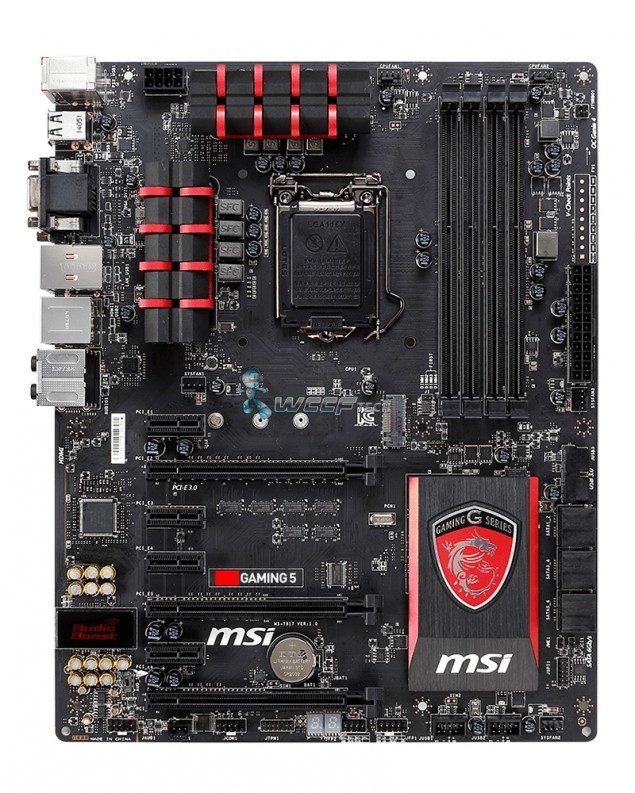 The MSI Gaming 5 comes with a 8 Phase supply powered with the 8-Pin power connector. Expansion slots include three PCI-e 3.0 x16, four PCI-e 3.0 x1 and a M.2 SSD interface. Four DIMM slots are located next to the 24-Pin ATX connector while storage packs 6 SATA 6 GB/s ports and a USB 3.0 header next to them. Audio Boost 2.0 is include but MSI has removed OC Engine, V-Check Points 2 and included a cheaper heatsink design without heatpipe to cut down the cost. 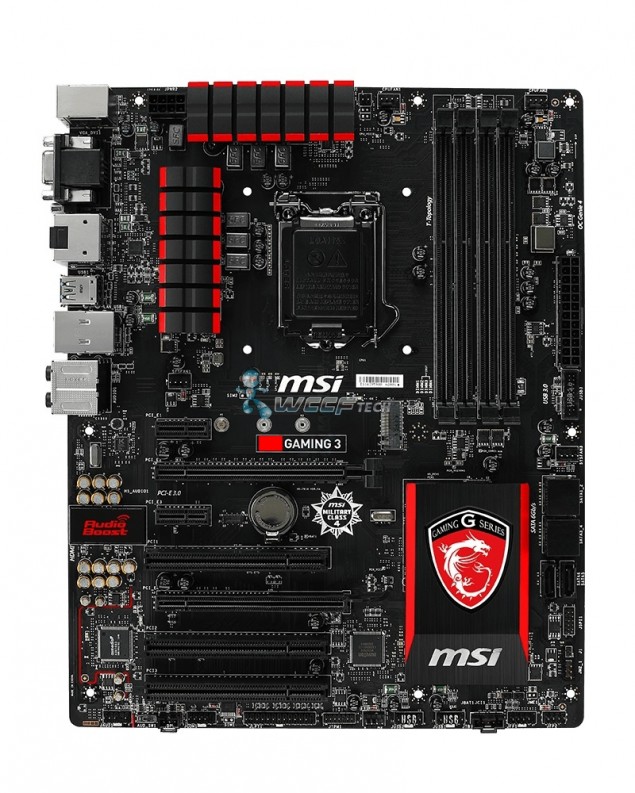 The Gaming 3 and Gaming 3 feature the same design and specifications, the only difference is that one comes with the top tier while the other comes with the entry tier 9-Series chipset. The main features include a 6 Phase power supply with a nice heatsink design followed by four DDR3 DIMM slots. Storage includes four SATA 6 GB/s ports while expansion includes two PCI-e 3.0 x16, two PCI-e 3.0 x1, three PCI and a M.2 SSD interface. Audio Boost 2 and MSI’s Military Class IV components are featured on both boards.